Polygenic inheritance occurs when a single trait is impacted by multiple genes. See how this works through a review of the genetic process, and how it manifests in real-world examples of humans and plants alike. Updated: 10/15/2021
Create an account

Most people remember taking a high school biology class. In that class, you may have discussed the inheritance of different traits, physical characteristics, and genes, which are sections of DNA that code for traits. Generally, most introductory biology courses talk about dominant and recessive traits. However, humans have slightly more than 20,000 genes and most of the traits are not simply dominant or recessive. Instead, many of our traits are passed from parent to offspring through other, more complex patterns of inheritance. One such pattern, and the focus of this lesson, is called polygenic inheritance, which is when a trait is influenced by more than one gene. 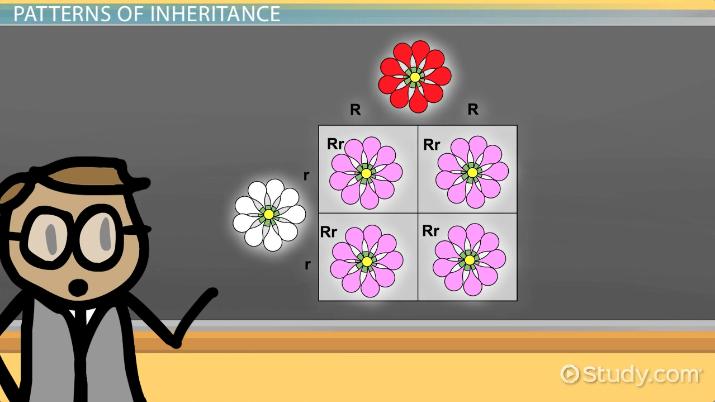 Coming up next: Recombination: Definition & Process

What does it mean to say that a trait is influenced by more than one gene? Well, to answer that question we must first examine some background information. For starters, let's assume we're studying a hypothetical gene for color in flowers. Suppose there are two versions of this gene: one version that makes red flowers and another that makes white flowers. These different versions of a gene or the trait for which they are responsible are called alleles. When applying this terminology to certain human traits, such as hair color, we say there are many different alleles that determine coloration. Think about it. Do people only possess dark hair or light hair? Of course they don't. There is variation in our hair color because of the numerous alleles combining to determine it.

This illustration presents a hypothetical polygenic pattern of inheritance for flower color. In this example, rather than having one gene control flower color, the interaction of three genes is responsible (as designated by the letters A, B, and C).

The lowercase versions of these genes represent recessive alleles (white flowers), while the capitalized letters represent the dominant alleles (red flowers). When these letters are put together, they work in conjunction with one another to produce an actual flower color for the plant. This final color is designated by the number scale on the bottom of our graphic (0 - 5). A flower containing dominant alleles from both the A and B gene would be redder (a rank of 4). While a flower containing only dominant alleles from one gene (say C) would appear whiter (a rank of 1 - 2). Ultimately, traits that are passed along via polygenic inheritance are determined by the interaction of several different gene variants.

Many of the traits displayed in nature are polygenic. In humans, traits such as height, weight, skin pigmentation, and hair color are polygenic. In fact, many of your traits are polygenic. All these traits are controlled by the interaction of several genes. Other traits exemplified in humans and other animals include size, longevity, disease resistance, temperament, or speed. In plants we see polygenic inheritance expressed in the grain color of wheat, the length of maize, or the size of certain flowers. Truth be told, polygenic patterns of inheritance are everywhere.

Many of the inheritance patterns seen in nature are polygenic. Polygenic inheritance is when traits are influenced by more than one gene, which is a segment of DNA that codes for specific traits. Traits are physical characteristics that come in different forms which are determined by the various versions of a trait, known as alleles, that code for them. Examples of polygenic inheritance in nature can be found in many places: in human height, skin color, and hair color; in animal size, longevity, or disease resistance; and in plants with grain color, length of maize, or flower size. All of these traits are influenced by multiple genes and considered polygenic.

Which is NOT an example of a polygenic trait in humans?