Dr. Chan has taught computer and college level physics, chemistry, and math for over eight years. Dr. Chan has a Ph.D. in Chemistry from U. C. Berkeley, an M.S. Physics plus 19 graduate Applied Math credits from UW, and an A.B. with honors from U.C .Berkeley in Physics.

Your cells use various types of molecules in order to perform their daily functions. One of the most important classes of molecules are called proteins. Proteins are molecules that have several different functions within the cell. Such functions include transporting things in and out of the cell, speeding up chemical reactions, and helping cells recognize and join to one another. Therefore, proteins are really versatile molecules that can be used for multiple purposes. Just like a Swiss army knife has multiple tools that can be used in different ways, proteins have different structures that specify their particular function. 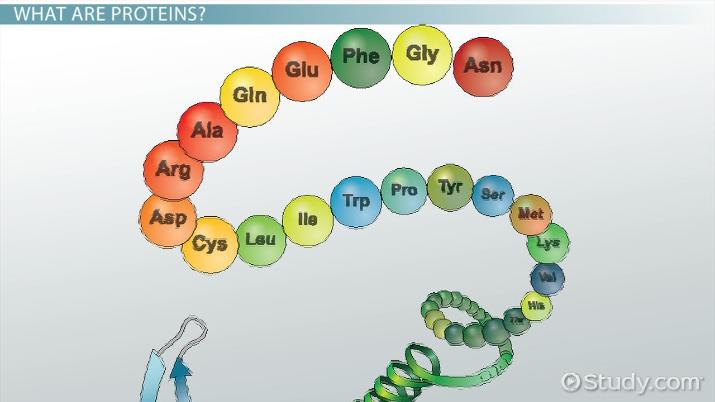 Try it now
Back
Coming up next: Pseudostratified Columnar Epithelium: Location & Function

There are 20 naturally-occurring amino acids, and each one is a little different. All amino acids have the same basic structure; however, something called an R group distinguishes one amino acid from another. Here, you can see the chemical structures of all 20 amino acids.

Although the black parts of each amino acid are the same, the R groups (shown in brown) are all different from one another. The differences in these R groups are what help give a polypeptide chain its structure and, ultimately, its function.

Dehydration synthesis involves the removal of a water molecule (H2O) from the two amino acids that are to be linked together. A hydrogen (H) is removed from one amino acid, and an oxygen and hydrogen (OH) are removed from the other amino acid. The removal of water creates a peptide bond, which holds two amino acids together. Each time an amino acid is added to the polypeptide chain, another water molecule is removed. Amino acids are continually joined to one another using dehydration synthesis. However, polypeptide chains can come in all different lengths. For example, insulin is one of the shortest proteins in the human body and consists of 51 amino acids. Titin, on the other hand, is the longest known protein and consists of multiple polypeptide chains and over 34,000 amino acids!

The process of learning about the polypeptide chain will increase your capacity to:

Given an unknown polypeptide, you might want to find out its sequence using chemical reactions to break the molecule into smaller pieces. The N-terminal residue (the first amino acid in the sequence) can react with phenylisothiocyanate to form a compound that can be analyzed to determine what that residue was. The rest of the original sequence is usually left intact. The process can be repeated many times to get the identity of the next amino acid. This is called the Edman degradation.

A peptide was broken into two smaller peptides by CNBr and into two different peptides by Tryp. The sequences are as follows:

What was the sequence of the parent polypeptide?

By arranging the four sequences in an overlapping set, we can read off the parent. The dots in the sequences below are only intended to provide spacing, so as to line things up.

What peptides would be released by trypsin treatment of the peptide?

Trypsin breaks the bond at the carboxyl side of lysine and arginine residues. It will produce Ala-Ser-Thr-Lys and Gly-Arg and Ser-Gly