Brenda has 25 years of experience teaching college level introductory biology and genetics. She earned her PhD in Genetics from Indiana University.

View bio
Polypeptides bond several amino acids together to create proteins and give them their unique shape. Explore the definition, formation, and structure of polypeptides, and understand the roles of amino acids, carboxyl groups, and the covalent bond in creating proteins. Updated: 10/11/2021
Create an account

Proteins are extremely important to cellular function. They make up half of the mass of a cell. Protein comes from the Greek word 'proteios,' which means 'first place.' Proteins help support structure in the cell and with transport and storage of substances. They also work to help to defend the cell and control metabolic functions. Structurally, proteins are very diverse and complex. Each type of protein holds its own specific shape, and that's where polypeptides come in. 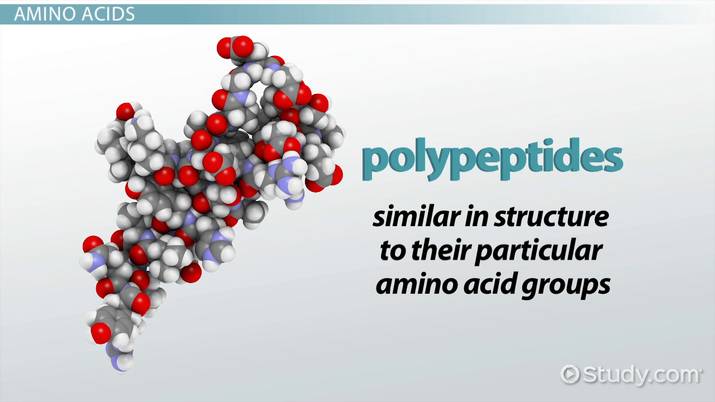 Polypeptides help make up proteins by bonding numerous amino acids together. Proteins are created by the bonding of two or more polypeptides, which are then folded into a specific shape for a particular protein.

Polypeptides are similar in structure to their particular amino acid groups, except that they're connected by covalent, or electron-sharing bonds. Amino acids are the basic building blocks of the polypeptide. There are 20 different amino acids, all with specific structures. By understanding the structure of the amino acids needed for whatever protein you are building, you can grasp the idea of how they will bond together with other amino acids.

Polypeptides become increasingly complex and diverse as they form proteins. At one end of the polypeptide is the carboxyl group called the c-terminal. On the opposite end is the amino terminal, or n-terminal.

So, how are polypeptides formed? It's kind of a 'wet process,' actually. Why? Because it involves water. Here's what this means: each amino acid has what's known as an amino group. An amino group is one that looks like this: NH2, where the N stands for nitrogen and the H stands for hydrogen. Amino acids also have a carboxyl group, which looks like this: COOH. The C stands for carbon, the O stands for oxygen, and the H you already know about. When the polypeptide is formed, at least two amino acids saddle up next to one another. When they do so, they reach out to each other (chemically speaking, of course). One reaches out with the amino group and the other reaches out with the carboxyl group.

They then chemically join hands to form a peptide bond (a.k.a. amide bond), which is the covalent bond between two amino acids. You know how if you hold someone's hand for too long, some watery sweat begins to build up between the hands? Well, when the two amino acids join hands to form a peptide bond, they actually release water as well. This is known as a condensation reaction because two or more molecules (in this case amino acids) combine to form an even larger molecule (a dipeptide, in this case) with a concurrent release of a smaller molecule (water, in our example). The amino acid reaching out with the carboxyl end (COOH) lets go of an OH, while the amino acid reaching out with the amino end (NH2), lets go of an H. OH + H = H20, which equals water.

Each amino acid unit in a polypeptide is called a residue. As such, all proteins are polypeptides, but not all polypeptides are proteins. The discussion for why this is the case is beyond this lesson's scope, but involves factors such as function, mass, and structure that are found in a protein but not in a simple and short polypeptide chain.

The formation of a polypeptide involves the formation of a peptide bond (a.k.a. amide bond), a type of covalent bond between one amino acid's amino group (NH2) and another amino acid's carboxyl group (COOH). This is known as a condensation reaction because two or more molecules combine to form an even larger molecule with a concurrent release of a smaller molecule (water, in this case). Two amino acids linked together are called a dipeptide, or generally just a peptide. A peptide is a molecule typically composed of between 2 and 50 amino acids, sometimes called an oligopeptide. A polypeptide is, very generally, seen as a molecule composed of 50 or more amino acids. Each amino acid unit in a polypeptide is called a residue.

What to Remember About Polypeptides

Once you've finished, you should be able to:

Now that you know what polypeptides are and how they are made, test your mastery of these molecules and have some fun while doing that!

Use the image below as a clue to some of the puzzle parts.

4. the number of peptide bonds that join 51 amino acids together

8. this chemical group of all amino acids has the formula COOH

11. this end of a polypeptide has a carboxyl group

12. all amino acids have an amino group, a carboxyl group and a _____ bonded to a central Carbon atom

14. the number of amino acids used to make polypeptides

15. chemical reaction that joins two amino acids together and releases a water molecule

1. may consist of more than one polypeptide

6. this end of the polypeptide has an amino group

10. a function of some proteins

13. this varies among the different amino acids

How Did You Do?

The Role of Water in Human Biology

What is the Difference Between Cis and Trans Fats?

Rough ER Structure & Function | What Does Rough ER Do?

What Are Laxatives? | Types & Side Effects