If you were to take a road trip across almost any country, you would travel through big cities and long stretches of rural towns. On your trip, you might notice that there are varying numbers of people in these different types of areas. This would be an example of a difference in population density, which is the number of people per unit of land area. 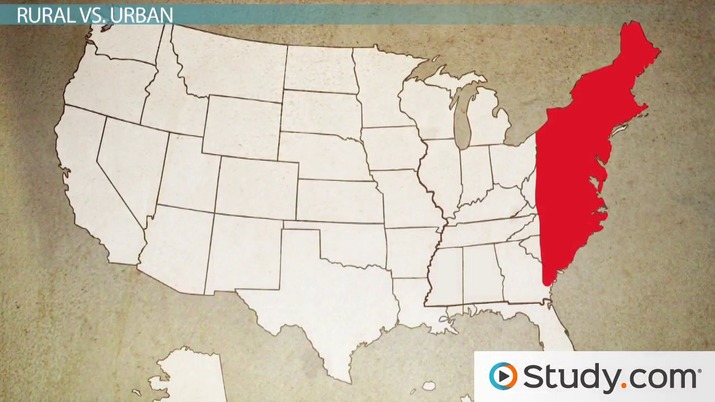 Coming up next: Population Size: Impacts on Resource Consumption

What Are Rural and Urban Areas?

Due to the vague nature of this definition, function is also considered when differentiating these terms. In general, an area is considered rural if most of the residents survive on agriculture or rely on natural resource-based occupations, such as logging or fishing. On the other hand, an area is considered urban when it has residents that do not directly depend on natural resource-based occupations.

Now that we have a better understanding of what makes an area rural or urban, let's explore the populations of these areas. Although the population density in urban areas is generally higher than in rural areas, the overall size of the population in each location has fluctuated over time. For the majority of human history, most people have lived in rural areas and have survived by hunting, gathering, fishing, farming or other occupations based on nature.

It wasn't until around 300 years ago, during the Industrial Revolution, that the population began to shift. People began to move to urban areas in search of jobs, food, housing, education, healthcare and more social activities.

The Explosion of Urban Areas

Due to this population explosion, a new term has been created for very large cities. Megacities is the term used to describe urban areas with a human population over 10 million people, including Beijing, Cairo and Mumbai. In the United States, the urban areas between Boston and Washington, D.C., are often referred to as a continuous megacity. The region is called 'BosWash' and has around 35 million residents.

Now let's review populations and how they are distributed between urban and rural locations. In general, an urban area is a city with a population size of more than 2,500 people and is characterized by having residents that do not directly depend on natural resource-based occupations. Rural areas are described as areas with a population of less than 2,500 people and where most of the residents survive on agriculture or rely on natural resource-based occupations.

For most of human history, the majority of the population has lived in rural areas. However, since the Industrial Revolution, there has been an increase in urbanization. Urbanization is the shift from rural to urban living and the increased concentration of the human population in densely populated cities. From the mid 1800s to 2009, the percentage of the entire human population living in urban areas has increased drastically, from around 2% to over 50%. In addition, urbanization has also been prevalent in the United States. As of 2013, around 82% of the population lived in urban areas.

The large and constant influx of people into urban areas has resulted in the creation of megacities, which are urban areas with a human population over 10 million people. It is predicted that over the coming years, the populations in urban areas will only continue to increase, and urban living will be the normal lifestyle for most people on Earth.

Demographic Changes from Fertility and Birthrates

Villages to Cities: How Cities Were Invented

Growth in the MICE Industry