Lesson Transcript
Instructor: Sarah Phenix
Learn about the organisms in the phylum Porifera, also known as sponges. Discover the body plans of the three types of Porifera. Finally, explore how they support their bodies with spicules in the absence of a skeletal system. Updated: 11/30/2021
Create an account

The Not-So-Square Pants of Porifera

If you watch a lot of cartoons, then you probably know about SpongeBob SquarePants, a square-shaped sponge who lives in a pineapple under the sea. He's not real, of course, but actual sponge organisms do exist in the animal kingdom. They are called porifera, and they live in marine environments (sadly, without any pants).

Now, you may be familiar with the fact that sponges come in a variety of colors and shapes and sizes, but did you know that, among that varied world of dazzling colors and wonky shapes, there is actually a great deal of uniformity in their body plan? Well, watch on, because we are about to explore what it means to have an asconoid, syconoid, or a leuconoid body plan. 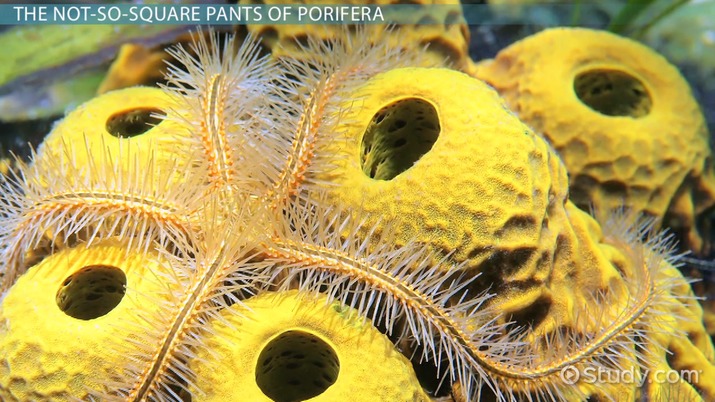 Coming up next: Porifera: Species & Types

The most simplistic body plan within the phylum porifera is the asconoid body plan. This is such a simplistic structure because the body plan has only one large internal chamber, called a spongocoel, that is lined with water-filtering choanocyte cells. Choanocytes are responsible for feeding the sponge by filtering organic materials out of the water. They also create the internal current that keeps water from becoming stagnant within their spongocoel.

Now, as a consequence of this body plan, the tissue of asconoid sponges is thinner than that of the syconoid or leuconoid, as their goal is to get the nutrient-carrying water to the filtering choanocytes as quickly as possible. Sponges of this body plan are smaller in size because their thin tissue is more breakable and can't readily support large structures. Some examples of this body plan are the yellow tube sponge and the purple vase sponge.

Ok, so now that we've looked at the most basic body plan, let's go on to explore how the asconoid shape is different than the syconoid shape.

The main difference between asconoid and syconoid body plans is that syconoid sponges have a row of tiny chambers, called radial canals, within their tissue that house their choanocytes. Now, this may seem like a minor difference, but it results in two major advantages: additional girth and increased surface area for feeding.

So, why are additional girth and increased surface area a big improvement? Well, increased girth means that their body walls are thicker and, as a result, have a greater capacity to support a larger overall body size than an asconoid. Furthermore, the additional surface area added by the many radial canals means that more of that water makes contact with those little filtering choanocytes. Thus, more nutrients are gathered to grow a larger body form.

The leuconoid body plan belongs to the big boys of the porifera world. These sponges, like the syconoid, also have radial canals but, unlike syconoids, leuconoids have more than a single row of these canals. If you were to cut a cross-section of a leuconoid sponge you would see a dense network of radial canals, meaning that leuconoids are superior in their capacity to filter more nutrients and, in doing so, are able to grow to be the largest of the sponges, due to their structurally thick and supportive body walls. In fact, leuconoid sponges are referred to as the 'red-woods of the reef' because they're some of the oldest and largest sponges, with some growing to about 8 feet in diameter and estimated at over 2,000 years old.

Not a Bone in Their Body

So, while there are only three variations between the overall body plan within the phylum porifera, there is a huge variety in the body shapes that porifera may come in. Therefore, they lack any consistency and are considered as exhibiting no true body symmetry. Now, it's true that their tissue is all organized around a central spongocoel. However, their number of ex-current osculum and branching arms differ even within individuals of the same species, thus making their body symmetry difficult to universally classify. The second universal feature is their support structure.

Regardless of whether a sponge is an encrusting sponge or a giant barrel sponge, all porifera rely on a mesh-like support system of billions of microscopic structures called spicules. Spicules, depending upon the species of sponge, are composed of either calcium carbonate, silica, or a combination of silica and a protein called spongin.

What's interesting to note is that the phylum porifera is divided into three classes of sponge based on the composition of their spicules. Class hexactinallid have siliceous spicules and so are known as 'glass sponges.' Class demospongia have a combination of silica and proteinaceous spongin, while class calcarea have spicules made of calcium carbonate.

Porifera are the group of animals commonly know as sponges and come in one of three different body plans. The most simplistic form, known as asconoid, have only a single internal chamber, called a spongocoel. Lined with water filtering choanocyte cells, syconoid sponges, unlike asconoids, have a row of tiny internal chambers, called radial canals, that house their choanocytes. As a result, syconoids have a greater capacity to both support a larger overall body size as well as a greater surface area for filtering nutrients from the water than asconoids. Leuconoids, being the largest sponges, have multiple levels of radial canal within their body walls, giving them the greatest capacity for filtration and growth.

Regardless of their particular body plan, sponges lack any identifiable body symmetry classification and they all rely on a support structure composed of microscopic interconnected spicules which, depending on their species, may be composed of calcium carbonate, silica, or a combination of silica and a protein called spongin and is the determining factor for their particular class determination.