A popular framework for business is known as Porter's Five Forces based on competitive forces affecting an industry. Discover the application of each of the four forces: competitive rivalry, the threat of new entrants, the bargaining power of suppliers and customers, and the threat of substitutes. Updated: 12/20/2021
Create an account

There are many factors to consider when creating a business. One of the most important is the competitiveness of the industry. Michael E. Porter, a Harvard professor known as a leader in competitive and strategic management, created a well-known model for determining the profitability of an industry. The framework is known as Porter's Five Forces and is based on the competitive forces that influence an industry the most. These five forces include: 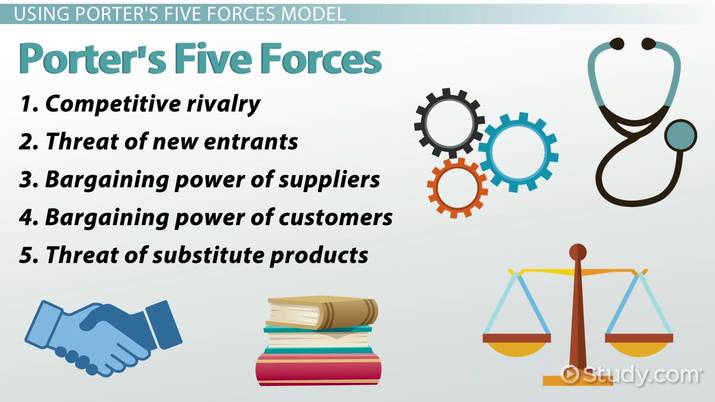 Coming up next: Practical Application: Using Porter's Five Forces Model in Your Business

Using these five forces will help a firm determine whether to enter an industry and how shape its competitive strategy. The model is extremely flexible and can be used to determine strengths and weaknesses in industries like healthcare, government, finance, education, and manufacturing.

Let's delve into how a strategic company can use Porter's model to determine whether to enter the industry. Would a company be able to create a competitive advantage over industry rivals? To demonstrate Porter's Five Forces, let's say we are an investment firm called Cross Investments, and we are looking for entrepreneurship ventures.

Of Porter's Five Forces, competitive rivalry has the strongest influence on whether entering an industry would be profitable. When rivalry is high, there are many competitors, and those competitors have a high cost associated with exiting the industry. Typically, the industry grows slowly, has little customer loyalty, and products and competitors are very similar.

Before the owners of Cross Industries created their company, they looked at the investment industry. They were trying to determine whether the industry had enough room for another profitable company. What they found was that the industry contained very few competitors. As the industry developed, though, the capital needed to enter the market increased. There really weren't any services that were unique from what Cross Industries could provide. It also didn't seem like many companies would have the money readily available to enter the market. The owners decided to create Cross Industries because there was little competitive rivalry in the industry. They had the capital so they pushed forward.

Cross Investments was researching whether to invest in a company that makes footballs. This market is difficult to enter. It has established brands like Nike, Wilson, and Under Armour. After researching the market, Cross Investments determined that with the high level of existing brand loyalty and the patents and trademarks needed to be successful, the investment was too risky.

When suppliers are limited or inputs are scarce, the bargaining power of suppliers is high. They can then raise their prices and limit their negotiations. This affects buyers because they have to either absorb these costs or raise their own prices. Furthermore, they may not even be able to get the supplies when they need them.

Cross Investments looked into buying a company that refurbishes vintage yachts. During its research, the company talked with who supplies the parts for the yachts. There were two major suppliers nationwide. Additional research showed that the yachts that are currently in demand have very few parts available elsewhere. Cross Investments decided to pass on this investment because the suppliers had too much bargaining power.

Going back to Cross Investments and the company's interest in vintage yachts, there were very few buyers in the industry. They could have easily joined together to boycott any company that charges prices they think are too high. Because this industry was a hobby to these buyers, they could do without or substitute another hobby. In this industry, buyers exercise a great deal of power.

When buyers are able to easily substitute products for another good with little cost, this force causes investors to look closely before entering the industry.

When Cross Investments was looking to invest in a company that wanted to make footballs, it was clear that if customers wanted to switch to a different brand of football, there was little keeping them from doing so. In this case, it's best if a company focuses on bringing something unique to a market, rather than coming into an industry that is full of established substitutes.

Porter's Five Forces is a framework based on the competitive forces that influence an industry the most, and it helps us determine whether we can be successful in an industry. These forces are:

Each can give us an essential piece of information needed to develop our competitive strategy. If we're already in an industry, these forces can help us identify our strengths and weaknesses. Using Porter's Five Forces to determine each force as a strength or weakness will pave the pathway for our business strategy.

Value Chain Analysis & Examples | What is a Value Chain?

Technology's Impact on Marketing and Marketers

Product Life Cycle Overview & Examples | What is the Product Lifecycle?

Product, Price, Place & Promotion | What Is a Marketing Mix?