Have you ever been in the baggage claim area at an airport after a flight? Everyone is looking for his or her suitcase. You watch carefully as each new suitcase appears in the luggage carousel and think, 'mine is pink.' In Spanish, you would think, 'la mía es rosa.' In Spanish, words like 'mine' or 'mía' are possessive pronouns; we use them to say 'who' something belongs to. 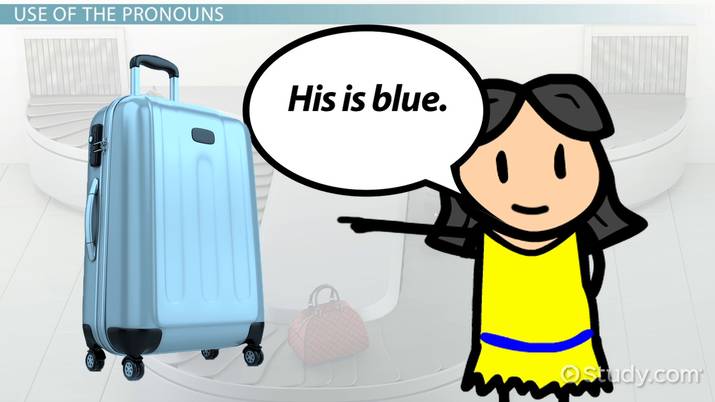 Coming up next: Sentences Using Ser

Here, you can see that there are three different ways to say 'yours' in Spanish: tuyo, suyo or vuestro. This is because Spanish uses a familiar and formal form of 'you.' You use the familiar form for people you know well, like family and friends: tuyo (singular) and vuestro (plural). For strangers or to show respect, use the formal form, suyo, for both singular and plural references.

So, for a quick recap, here's how to choose the correct possessive pronoun form of 'yours:'

The pronoun that you use depends on the noun that it describes. First, decide if the noun is singular or plural. For instance, at the airport, were you looking for one suitcase, una maleta, or many suitcases, unas maletas? For singular nouns, use the forms without an '-s' on the end, and for plural nouns, add an '-s' to the end of the pronouns.

Use of the Pronouns

Here are a few examples where the subject of the sentence is a possessive pronoun.

You can also use possessive pronouns as the object of a sentence after the verb. First, decide which form of the pronoun you need and put it after the verb. So, if you want to say, 'the red suitcases are mine,' you would say, las maletas rojas son mías.

Take a look at these examples, where the possessive pronoun is the object of the sentence.

In this lesson, you learned that mío, tuyo, suyo, nuestro and vuestro are the possessive pronouns in Spanish, which we use to say 'who' something belongs to. Each one of them has a masculine form ending in -o or -os and a feminine form ending in -a or -as. By adding 's' to the singular forms, you get the plural forms of these words. You can use possessive pronouns as the subject at the beginning of a sentence or as an object after the verb in a sentence.

Spanish Vocabulary for Learning About Animals

The Personal A in Spanish

Spanish Vocabulary: The Names of Professions

The Concept of How in Spanish: Adding 'Que' to Adjectives & Nouns

Time Expressions in Spanish with Hacer