Post hoc fallacy refers to using the logical assertion that if event B follows event A, then A must have caused B to occur. See how this fallacy appears in economics through examples of how false expectations of causality lead to poor decision making. Updated: 10/14/2021
Create an account

Have you ever had a lucky charm you wore or a ritual you performed before doing something? Did you think that they increased your chance of success? If so, you most likely fell victim to post hoc fallacy.

Post hoc fallacy is the reasoning that since event B followed event A, event B must have been caused by event A. The conclusion you reach is based solely on the order of events that happened rather than taking into account other factors or potential logical reasons.

For example, suppose you bought a new necklace and wore it before your big history exam. You just happened to do really well on the exam, even though you didn't study much. You reason that your good luck necklace was the cause. There may be several other logical explanations, but you don't consider them. Maybe the test was simply easy, and everyone else in the class did well, too. Not taking the time to research other potential causes and simply believing in your new good luck charm is an example of a post hoc fallacy.

Why does this happen? People typically use this reasoning because it is simple and doesn't require a lot of thought or energy. Instead of thinking things through carefully, we sometimes jump to a quick and easy conclusion. In economics and many other fields, it is important to carefully look at all the information available before making conclusions. If you don't, post hoc fallacy thinking can lead to strategies that you soon find out don't work! 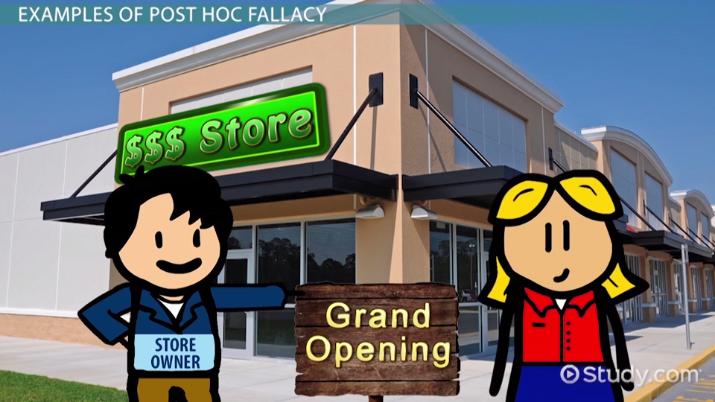 Coming up next: Potential Output in Economics: Definition & Overview

Here are a few more examples of post hoc fallacies:

Every time I wash my car it rains! - How many times have you heard that phrase? People often wash their cars when it is convenient or they have time. They may wash it three times in a row, and each time it rains the next day. Did it really rain because they washed their car? Tell them they are falling victim to a post hoc fallacy and to check the extended weather forecast before they wash their car next time!

Price change reasoning - After an electronic company raises its prices on DVD players, gaming systems, and televisions, it notices that sales and revenue improve by 25% over the next three months! The company quickly concludes that the price change caused this strong performance. So, it decides to raise prices again. Three more months go by, and the company sees that this strategy doesn't work this time. Upon further research, the company finds out that its sales initially increased because its competitors had raised their prices even more during that time frame. After the second price increase, the electronic company was no longer as cheap compared to the other companies, and demand for its products declined.

Poor retail store performance - An owner of a small chain of dollar stores opens a new location and hires a new manager to run it. After the first month, the owner discovers that sales are nowhere near the projected levels. The owner immediately assumes the poor performance is because of the new manager. Looking back on it a year later, the owner realizes he was deceived by post hoc fallacy reasoning. With more research, he learns that he didn't locate his store in the right type of low income demographic where dollar stores perform better. He also learns that he wasn't carrying the right mix of inventory, and that those two things were the main drivers of the poor store performance.

The economy is good or bad because of a new president - This one you may have heard a lot, especially if you talk with people who are passionate about politics. After a new president takes office, many people claim that because unemployment is high, the housing market is down, and economic growth is below 2%, it is the fault of the new Republican or Democrat president. What economists realize, that others might not, is that there is usually a delay or lag in the measures of economic growth, housing, unemployment, family income, and other economic indicators. The results we are experiencing now may be from economic policies and changes that were implemented two or three years ago. Many of the current president's decisions might not be fully felt until the third or fourth year of his term.

Post hoc fallacy is the reasoning that since event B followed event A, event B must have been caused by event A. Coming up with conclusions based solely on the order of events, often leads to incorrect strategies and surprising failures in business or personal life. This often superstitious way of thinking can lead people down the wrong path. Taking the time to research all possible explanations will most likely lead to better conclusions.

The Fallacy of Composition in Economics: Definition & Examples

The Law of the Downward Sloping Demand Curve