Racial discrimination was reflected in the abuse of Native American and Latinx populations throughout the 1950s. Learn the manifestation of discrimination against these groups alongside the events leading up to the Civil Rights Movement. Updated: 11/07/2021
Create an account

All throughout American history, race and ethnicity have been complicated subjects. In the 1800s, Irish and Italian immigrants were treated harshly by communities of English and Germanic Americans who had been in the country for only a few decades more. Today, other groups are treated harshly. Many believe a key issue that is present today is the effect of Systemic Racism. This is when the system is set up in such a way, whether intentionally or not, to help one group along at the expense of others.

Many of us have a very romanticized idea of the 1950s, based in no small part on shows like Leave It to Beaver. In fact, Leave It to Beaver helped shape what the people of the 1950s thought of themselves. However, if you watch one of those old shows, you'll see that the actors were almost always white and other minority groups were rarely represented.

In other lessons of this chapter, I hope you'll have the time to explore what is perhaps the most famous divide in American history, the African American pursuit of equality. However, in this lesson we're going to focus primarily on the challenges of Native Americans and Latinx Americans at the time of the 1950s. 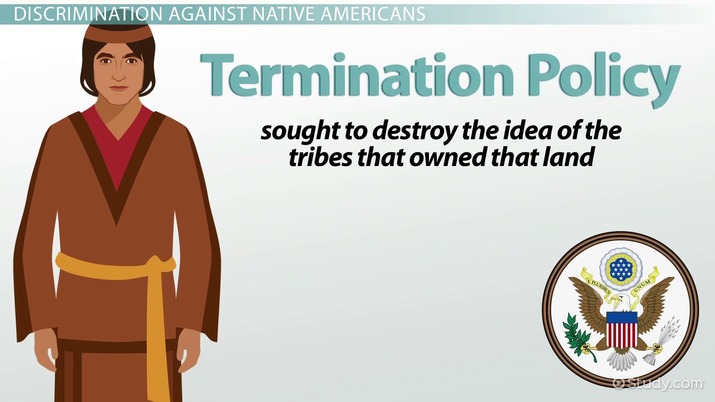 Coming up next: Juvenile Delinquency in the 1950s

Just like the discrimination the Irish experienced in the 1850s, the idea of ''our country'' often comes up. Simply put, it's not a valid defense against Native American tribes because they were here long before most other people! However, Native Americans, despite their originality to the United States, were not featured on shows like Leave It to Beaver, and if they did make an appearance, they were often stereotyped to the point of offense.

Now let's look at some of the backstory prior to the 1950s. Native Americans had been placed on reservations at the end of the 19th century. This land was considered unneeded by the white settlers, but 60 years later that land now had prime timber, oil reserves, and even oceanfront real estate. As a result, the United States Government started what it called the Termination Policy, which sought to destroy the idea of the tribes that owned that land. Without the idea of a tribe, the land was up for gain. More than 2.5 million acres were put up for sale after the government seized the land.

One of the groups that would be competing for the ability to make money off of these new lands were Latinx Americans, but they, too, were heavily discriminated against. The Longoria Affair shows a particularly heartbreaking incident in which a soldier named Felix Longoria was denied interment in his local cemetery because he was of Mexican descent. The fact that he had died fighting the Japanese during World War II in 1945 was of apparently no importance. Ultimately, he was interred at Arlington National Cemetery in order to spare the state of Texas the controversy that was rapidly brewing. Sadly, Longoria's case would prove to be far from unique, as other Latinx American soldiers and veterans found themselves victims of discrimination. Often, they lacked the financial resources to aggressively pursue their cases.

That rapidly brewing controversy could not be contained, however. Already the American GI Forum, a group that sought to expose discrimination against Latinx Americans who had served in the military, had gained significant influence from the event. By the time that the country entered the 1950s, the GI Forum was bringing attention to the discrepancies with which the country treated veterans who were not white and began to be a source of inspiration for other groups that sought to rectify such wrongs. Later, starting in 1962, the issues faced by Latinx people would become more apparent and inspired the founding of the United Farm Workers Union, which sought to bring greater economic opportunities to financially challenged individuals.

Ethnic and racial tension in the 1950s and beyond was not only about the rights of African Americans but also about other minority groups as this lesson demonstrates by explaining some of the problems faced by Native Americans and Latinx Americans. Native Americans found themselves having to constantly lose any economic position they held on the whims of the government. Meanwhile, Latinx Americans were subjected to heavy discrimination, meaning that the voices of even those who had served the United States in the military would go unheard.

Where was Felix Longoria eventually buried?

Superstition in The Adventures of Huckleberry Finn: Examples & Quotes

Tension Between the US and the Soviets: Wars, Confrontations & the Cold War

Soup Kitchens During the Great Depression

Why Did the U.S. Enter the Korean War? | Reasons, Outcomes, Causes & Effects

Migration from the Rust Belt to the Sun Belt

Guerrilla Warfare in the Vietnam War