View bio
The High Middles Ages were defined by a constant struggle for power between the Holy Roman Empire and European monarchs, most notably a succession of German kings. Learn about the power struggles of popes versus emperors as Christianity swept across Europe between the 11th and 13th centuries. Updated: 09/19/2021
Create an account

Before the High Middle Ages, which spanned from the 11th to the 13th centuries, Christianity saw a massive expansion throughout Europe. Nations began to declare Catholicism as the dominant religion, giving the pope increasing power. Nobles fought for control of the papacy while literacy rates among the clerics declined. Church officials became corrupt with their authority.

At this time, the German Empire was under the rule of Otto I the Great. He created a strong alliance with the church by appointing officials who were loyal to him. He also allowed the church to have authority over some German lands.

This was the beginning of the renewal of the Holy Roman Empire. Otto III, who ruled from 983 to 1002, made the capital of his empire Rome and declared himself emperor of the Romans. Otto was attempting to revive the Western Roman Empire, which had deteriorated during the 5th and 6th centuries and became independent cities ruled by Germanic nobles. After declaring himself emperor, Otto appointed non-Italian church officials, which was answered with rebellion. He was eventually forced to flee Rome and died before he could return.

The rulers that held control over the empire from 1024 to 1125 were known as the Salian emperors. They attempted to centralize control and lessen the authority of other powers like nobles and dukes. 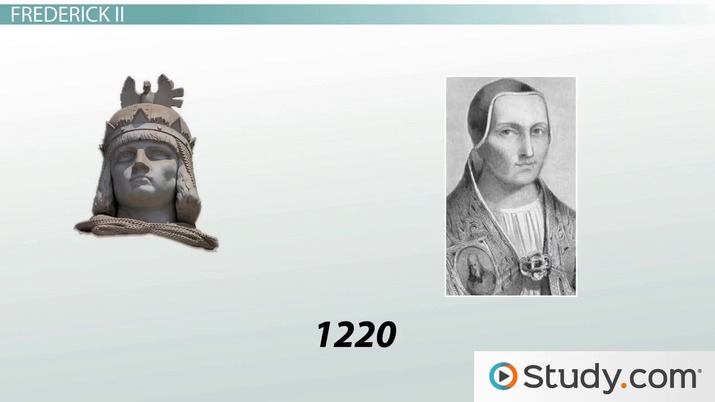 Try it now
Back
Coming up next: The Daily Life of English Peasants

Henry IV, who ruled from 1056 to 1105, helped the German monarchy reach the height of its power, but he also started a bitter argument with the reigning pope. Like Otto III before him, Henry argued with the reigning pope - this time Gregory VII - over who had the right to authorize the appointment of officials. This action is known as investiture. This fight, known as the Investiture Controversy, led to both the king and the pope renouncing each other's position. Because German nobles were loyal to the pope, the king had to renounce some of his authority by begging the pope to recognize him as king.

After the Investiture Controversy, German nobles defied the king's authority, leaving the German monarchy lacking in power. Italy was also experiencing unrest. Italian city-states were battling for independence and power over each other. Hoping to gain more power, they joined in the ongoing fight between the pope and the German emperors.

Frederick I Barbarossa ruled Germany from 1152 to 1190. He worked to re-centralize control over the German empire by forcing nobles to acknowledge his authority. He was successful in establishing his rule, but he needed Italy's resources to hold his control over Germany. Italy joined with the pope to fight against Frederick's heavy taxes. Italy and the pope dominated their battle with the German monarchy for over two decades.

Frederick's grandson, Frederick II, became king of Germany when he was just a child. He was placed in the care of Pope Innocent III, a very powerful pope. With the pope's support, Frederick was declared emperor in 1220.

Frederick's time with Innocent III did not protect him from conflict with the papacy. Italian city-states continued to fight with the pope against Frederick's authority. In the end, Frederick would fail at maintaining control, just as his grandfather did. However, he had even more conflict with the church during a crusading expedition. The Crusades were holy wars sanctioned by the pope. Frederick had agreed to join in a crusade but never made it to his destination, likely due to illness. That crusade was a failure for the church, and Frederick was excommunicated by the pope. When Frederick joined another crusade despite his excommunication, the pope excommunicated him again. Frederick then successfully gained control of Jerusalem, only to be excommunicated a third time by the pope.

As Frederick attempted to centralize control of Italy, he sacrificed his authority in Germany. He gave royal land to German princes and nobles in exchange for their support in his battle with Italy. Frederick had spent time in Sicily and had a particular interest in it. He was able to gain control of that area and create a centralized, bureaucratic government there. He created a uniform currency, abolished internal tariffs, and encouraged commerce.

The Empire After Frederick II

Frederick successfully gained control over the Holy Roman Empire in Germany and Italy, but after his death in 1250, the empire collapsed. Frederick's son ruled unsuccessfully for a short amount of time before dying.

The papacy's apparent victory over Frederick's successors cost the church some of its credibility. The pope had abused his spiritual power when he battled against Frederick and the Hohenstaufens. The actions of the pope mirrored those of the princes and aristocrats.

The Holy Roman Empire never again reached the height it did under Frederick I Barbarossa. Future emperors avoided conflict with the volatile Italian city states. They also stopped seeking the imperial crown from the pope. German monarchs slowly ceased their attempt to gain power over German nobles. Germany fell into political disunity that would last until the late 19th century.

When Pope Gregory VII and King Henry IV argued over who had the power of investiture, the King's influence in Germany declined. Frederick I succeeded in centralizing control of Germany and expanding power into Italy. When Frederick II came into control of Germany, he continued the conquest for centralized control of the Holy Roman Empire but met with consistent conflict from the papacy. He was successful in creating a united empire, but his empire fell soon after his death. The princes of Italy and Germany proceeded to fight amongst themselves, while the pope used political manipulation to gain power and allegiance.

Prompts About Power Struggles of the Holy Roman Empire:

Create a timeline that covers the major events and rulers of the Holy Roman Empire during the High Middle Ages.

Example: The rulers between 1024 and 1125 were the Salian emperors.

Write an essay of approximately three to four paragraphs that explains how the Investiture Controversy led to increased bitterness between the papacy, German emperors, and German nobles.

Example: German nobles were loyal to the Catholic Church, so there was discord between the nobles and the emperor.

In approximately three to four paragraphs, write an essay that describes how unrest in Italy created further disharmony between Germany and the papacy.

Example: Italy teamed up with the papacy against Germany, especially after Frederick I Barbarossa began levying high taxes.

Write an essay of at least one page that answers the following question: How did the Crusades ultimately undermine the pope's authority in the Holy Roman Empire?

Example: Unleashing violent wars caused many people to think that the pope was not behaving in a holy or spiritual way.

Make a poster, chart, or some other type of graphic organizer that lists the pros and cons of Frederick II's rule.

Example: Frederick II gained control of Jerusalem and Sicily, while losing some power in Germany.

The Spread of Islam: History & Facts | The Progress of the Caliphates

The Spread of Islam: History & Facts | The Progress of the Caliphates