Kara Wilson is a 6th-12th grade English and Drama teacher. She has a B.A. in Literature and an M.Ed, both of which she earned from the University of California, Santa Barbara.

Dialogue in literature can serve many purposes, including revealing character traits and moving the plot forward. Learn how to identify the different purposes of dialogue and how to analyze it by asking important questions. Updated: 10/20/2021
Create an account

How to Analyze Dialogue

Whether we're casually talking with people, sharing a secret, or in the middle of a formal interview, conversations can teach us a lot about people and how they interact with others. Similarly, dialogue in novels, short stories, plays, and films can tell us a great deal and serve many purposes. There are different purposes that dialogue can serve. It can:

In order to analyze dialogue in a text, we need to ask ourselves some important questions: 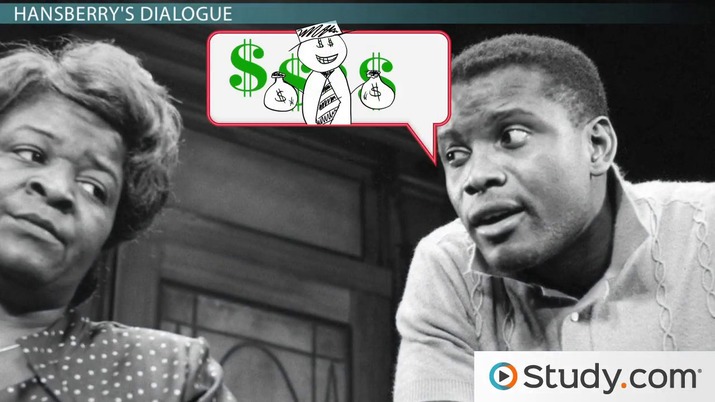 Coming up next: What Are Connotation and Denotation? - Definitions & Examples

Dialogue should always sound realistic, but it shouldn't go on and on, as we tend to do in real life. So, writers often need to cut out unnecessary sections of dialogue where the reader isn't learning anything new and nothing is happening. Your typical daily conversation of:

'I'm well, you?' doesn't keep the reader interested. It's usually best if dialogue sections are meaningful but brief. The words that characters say should convey a great deal.

American novelist and screenwriter Elmore Leonard was known for sparse but meaningful dialogue. Here's an example from his crime novel Out of Sight, which also became a feature film:

'Your dog was killed?'

This exchange sounds pretty natural, yet there are very few words here. The purpose of including this bit of dialogue is clear: it reveals important details, which provide background information about the characters. Leonard's sparse wording is a stylistic choice that many readers appreciate because we can learn something important without having to read a long, drawn out conversation.

A Raisin in the Sun is an award-winning play by Lorraine Hansberry that had a great deal of success on Broadway, winning multiple Tony awards. The play paints a vivid picture of a few weeks in the life of the Younger family. They are an African American family living in Chicago in the 1950s.

The play opens with the news that they are about to receive a $10,000 life insurance check from the deceased Mr. Younger. Each family member has a different idea about what they should do with the money. Mama wants to buy a house because that was a dream she shared with her husband. Mama's adult son, Walter Lee, wants to invest in a liquor store with his friends because he thinks it will solve the family's financial problems:

'MAMA: Oh - So now it's life. Money is life. Once upon a time freedom used to be life - now it's money. I guess the world really do change.'

'WALTER: No - it was always money, Mama. We just didn't know about it.'

'MAMA: No . . . something has changed. You something new, boy. In my time we was worried about not being lynched. You ain't satisfied or proud of nothing we done. I mean that you had a home; that we kept you out of trouble till you was grown; that you don't have to ride to work on the back of nobody's streetcar. You my children - but how different we done become.'

These lines of dialogue serve the purpose of showing the characters' different ideas, which have been shaped by their experiences growing up in different generations. It also reveals their economic struggles. This important difference of opinion creates a conflict between them, which moves the story along. Walter expresses his belief that money is the answer to everything. It also shows that this is how he measures a person's success, while Mama values freedom and the progress that she and her husband tried to make.

This conversation is also taking place in the 1950s during the Civil Rights Movement in which people of color fought for equal rights and against racial discrimination, including housing discrimination. Walter hints at how important having money is when dealing with racial discrimination by saying 'It was always money, Mama. We just didn't know about it.'

Mama also speaks in a particular way by using a specific dialect. Dialect is a way a language is spoken in a particular area, which uses some of its own words, grammar, and pronunciations. When Mama says, 'You something new, boy,' she doesn't say 'You are something new,' which would be grammatically correct. She also calls her son 'boy,' which is characteristic of the way language was spoken by many African Americans during this time. Hansberry's effective use of dialect makes Mama's voice distinct and unique.

'Something funny 'bout that gal,' Paul D said, mostly to himself.'

'She's not strong. She can hardly walk without holding on to something.'

'That's what I mean. Can't walk, but I seen her pick up the rocker with one hand.'

Morrison's characters have such clear voices that only one dialogue tag is needed. The first line uses the dialogue tag 'Paul D said,' but the rest of the conversation simply goes back and forth without noting who says what because the reader automatically knows.

Denver's mother speaks primarily in complete sentences, while Paul D speaks in more grammatically incorrect phrases. This points to Morrison's use of dialect. The way they speak points to their background as former slaves living in Ohio in the late 1800s. Paul D uses phrases like 'I seen' instead of the grammatically correct 'I saw,' and he uses slang words, such as 'funny' to mean 'strange,' 'bout' for 'about,' and 'gal' for 'girl.' Their feelings of curiosity and suspicion are also communicated through what is said.

The purpose of this dialogue is to show how these characters interact, what makes Beloved unusual, and to build tension around the mystery of who Beloved is. Without this scene, the plot could not move forward.

Let's review the key concepts that we just covered. There are different purposes that dialogue can serve. It can:

In order to analyze dialogue in a text, we need to ask ourselves some important questions:

Dialect is often used in dialogue, and it is a way a language is spoken in a particular area, which uses some of its own words, grammar, and pronunciations.

How Dialogue Provokes a Decision

How Fiction Draws on Patterns and Events from Other Works

Reading & Interpreting Dialogue from a Script or Play

Interpreting the Main Idea and Purpose of a Scene

Practice Analyzing and Interpreting a Diary

How to Analyze Plot: Steps and Examples

How to Determine the Writer's Tone and Point-of-View