In this lesson, you'll have a chance to practice real-world applications of projectile motion formulas. You'll learn how to approach these problems and we'll walk you through solving them.
Create an account

What Is Projectile Motion?

What do raindrops falling from the sky and a baseball flying through the air have in common? Projectile motion!

Projectile motion can be seen as motion in which an object is moving through space only under the influence of the force of gravity. This moving object can be of any size, shape, and material composition, and it is itself referred to as a projectile.

Although in many real-world situations other small forces may be involved, such as air resistance retarding a baseball's motion, we assume these other forces to be negligible for simplicity's sake.

The general strategy for solving projectile motion problems is to read through the problem making sure you understand what's happening, write down the known and unknown quantities, and solve for one unknown quantity at a time by selecting an equation that has the unknown quantities you're searching for, but not others. 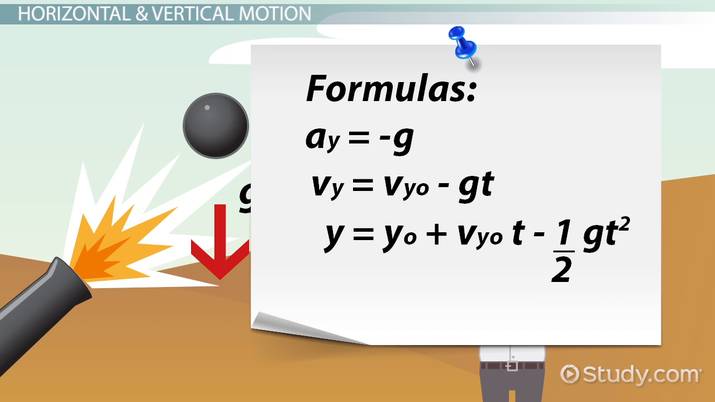 To solve projectile motion problems, we have to keep a few things in mind. First, the projectile's horizontal velocity must remain constant, since gravity is only acting in the vertical direction. This leads us to the following formulas:

How about in the vertical direction? Well, since we now have to account for the downward force of gravity, the formulas are as follows:

With that potentially boring, but still important, stuff out of the way, let's get to some cool examples. Just make sure to try each problem by yourself before seeing the solution this lesson provides. It's called practice for a reason!

Imagine firing a cannonball from a 60-meter-high hill onto the ground below. Assume that the cannonball's velocity is 25 m/s, that it is fired at a 40 degree angle with respect to the horizontal, and that you've ensured no one in the ground below.

Calculate the horizontal distance it will travel, its maximum height, and the total travel time until the cannonball hits the ground, as shown in the following illustration:

For each of the unknowns we're solving for (time, max height, and the total horizontal range), the trick is to pick an equation that contains only one unknown. You can see that there are several different knowns in our example:

The total travel time can be calculated using this equation because it contains the unknown t but not the unknowns x or hmax:

After solving the quadratic equation, you should get t equals 5.5 seconds.

To calculate the maximum height, we first need to use the equation shown below to compute the time, t, it will take to reach the vertical peak:

Now we can use this formula to find the maximum height, where y is hmax. Again:

We calculate the maximum height to be 73.2 meters.

Finally, we calculate the horizontal distance traveled, x, by using the following formula:

Plugging in the total travel time, 5.5 seconds, and the horizontal component of velocity, v subscript x zero, into the equation:

We get the horizontal distance traveled, x, equal to 105 meters.

Imagine you drop a coin from the observation deck of the Eiffel Tower, 276 meters above ground. (Don't actually try this in real life, it can really hurt someone!) Assume air resistance is negligible. How much time will it take the coin to hit the ground and what will be its final velocity as it makes contact with the ground?

Solving for the time, you should get t equals 7.5 seconds.

What about the final vertical velocity as the coin hits the ground? Since we now know t, we can use the equation shown here to solve for this! Here is the equation we need:

We plug in our knowns, the zero for the initial vertical velocity and 7.5 seconds for t,

to get 73.5 meters per second for the final velocity. Note that we could also have used the equation here:

to obtain the same result.

If you ran these experiments correctly, no one should've gotten hurt! It also won't hurt to review some things. Recall that projectile motion is motion in which an object is moving through space only under the influence of the force of gravity. This moving object can be of any size, shape, and material composition, and is called a projectile. We have used two sets of formulas: the first to analyze motion along the x-axis,

and the second to analyze motion along the y-axis.