Ashley has a M.A. in Spanish as well as a B.S. in Foreign Language Education. She has taught K-12 and now teaches college level.

A good way to practice a foreign language is by navigating through a local menu and its options. Learn about reading a menu in Spanish, menu categories, what to ask for and how to say it. Updated: 12/01/2021
Create an account

Food. It's an essential part of life and a window into culture and traditions, and some might argue that it tastes better when it's made for you. If you want to experience some Hispanic cuisine, maybe from a cafe in a Plaza Mayor in Spain or from a street food cart in Latin America, you're going to have to know how to read the menu, la carta, or the menu of the day, el menú del día, first. 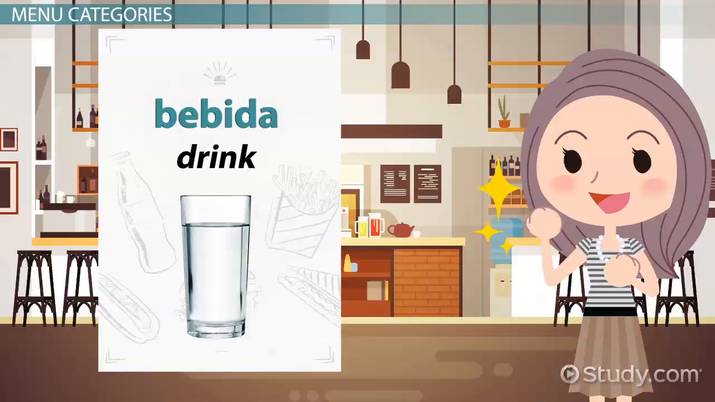 Coming up next: Spanish Vocabulary: Going to the Beauty Salon

A proper feast isn't complete without courses. Here are some menu headings you might need to know.

First, you'll probably order a bebida, or a drink, to help wake up your taste buds. You might consider:

An aperitivo, entrante, entrada or entremés refers to an appetizer as we recognize it in the U.S. in the sense that it is a small portion of food usually eaten before a full meal. For example, tapas are a popular snack, similar to a small plate or an appetizer that you might like to try in Spain.

While we're talking about tasty pre-meal goodies, let's not forget sopas y ensaladas, or soups and salads. Soups may also be labelled as caldos, which are more like broths, or cremas, which have a more creamy texture. You might also find traditional Spanish gazpacho, or a cold savory soup, under the menu category.

This brings us to the main course, the plato principal. Of course, this could include subcategories such as pastas (pastas), carnes (meats), pollo (chicken), pescado(fish) or mariscos (seafoods), just to name a few. If needed, you might also ask for options that are vegetariano or vegano. If you want to explore beyond the familiar, here are some traditional favorites you might try:

If you want some extra goodies to go with your meal, consider ordering a side dish or acompañamiento. Possible choices are:

To bring your meal to a close, ask for a postre, you guessed it, a dessert! Common Hispanic desserts might include:

We all have our favorite food preparations. Although you might not want to admit it, you might really like fried food, or you might opt for other healthier options. Knowing these terms will help you discover some familiar favorites on a foreign menu.

Anything that is described as frito or frita would please any fried food lover while grilled foods will be described by a la parilla or a la plancha. If you opt for a baked option, it will read as al horno, while a roasted dish will include the word asado or asada. To add a little more flavor, dishes prepared a la leña or ahumado will have more of a fire-roasted or smoked taste, respectively. Other preparations include cocido or boiled, guisado or stewed and tostado or toasted. And if you can't take this heat, then stay out of the kitchen!

Now that you know some basic menu items, here are some phrases to help your experience run smoothly:

Remember the important menu headings like bebidas, or drinks, and plato principal, or main dish. If you want to spice up the meal, don't forget to order an appetizer or aperitivo to start and a postre, which means dessert, to finish. It might be a good idea to order a sopa, soup, or ensalada, salad, if you're extra hungry. Now, acompañamientos, or sides, may or may not come with your plato principal, so keep that in mind as well. Don't forget to try to explore cultural favorites! Recognizing how a food is prepared as well as using proper manners can make all the difference as well. ¡Buen provecho!, or Bon appétit!

The Parts of the Body in Spanish

Using the Conditional Tense in Spanish

What is a Cognate? | Examples