Need some help working through the Conflicting Viewpoints passages on the ACT Science section? In this lesson, we'll walk you through some sample questions.
Create an account

On the ACT Science section, Conflicting Viewpoints passages ask you to evaluate the opinions of two or more scientists on a particular topic. These passages give you a break on the crazy charts, but they make up for it with more text to read and multiple viewpoints to keep track of.

The key to success on the Conflicting Viewpoints passages is to stay completely clear on who says what. You will get questions designed to confuse you about this, so stay on top of it, and you'll be well on your way to a high score. 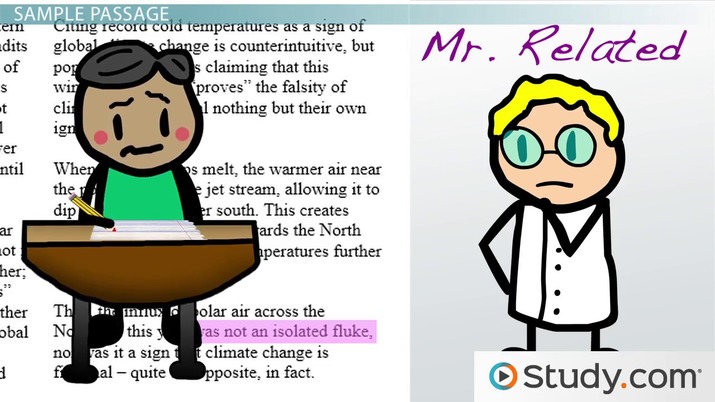 Coming up next: ACT Science Reasoning: More Reasoning than Science

To start you off, here's a sample passage:

Some students prefer to read through both passages completely; other students are fine with just skimming for the main idea. Pick whichever sounds okay to you, and try it out.

Got that? That was pretty stingy on the reading time, but on the real live ACT, that's what you'll be up against. Now let's see how much you retained. What topic are both of these scientists talking about?

If you said something like 'global climate change' or 'cold weather' or 'winter temperatures,' you hit it right on the nose. Both of these passages are discussing the pattern of colder weather in 2013-14 and how it fit into broader patterns of climate change.

Now let's talk about Scientist 1. What was his opinion on this topic? Scientist 1 thinks that...

If you just finished that sentence with something like, 'the winter weather was not a sign of global climate change' or 'the winter cold snap was just an outlier,' you got it right. Scientist 1 thinks that: 'This particular seasonal abnormality was an isolated anomaly, and nothing more.'

To keep track of this, maybe we could nickname Scientist 1 'Mr. Unrelated.'

Now how about Scientist 2. What does he have to say about the topic?

You might think all this is a lot of work to do for just the passages, but it'll save you so much time down the line.

A few of the questions on the Conflicting Viewpoints passages will just ask you about one of the scientists. Here's an example:

Can you find the reason in Scientist 1's opinion? Which of the answer choices sounds most like his argument? The answer's coming up.

Did you pick (B)? Scientist 1 is arguing that the unusually harsh storm season this year was an outlier. It didn't fit into a pattern. He never says anything related to answers (A), (C), or (D), so (B) is the correct answer.

That question was pretty small potatoes, though. It only covered one of the two scientists involved. Next, let's try a harder one that asks you about both.

Let's first go through looking for something that does support the view of Scientist 2, Mr. Related. We can cross off choice (A) because choice (A) says that the winter storms are not related, so this doesn't fit.

We can also use this method to cross off (D), since Scientist 2 says that the polar ice caps are melting. So choice (D) would contradict Scientist 2 as well.

Now we're already down to just two answer choices. Both (B) and (C) could theoretically support Scientist 2, so now we'll see which one contradicts Scientist 1.

Scientist 1 doesn't make an argument about whether or not humans are responsible for climate change, so choice (C) just isn't relevant.

In this lesson, you worked through a Conflicting Viewpoints passage and two questions on it to get a preview of what these passages will look like on the test. As you can see, they're not impossible; they just require you to keep track of who says what.

Ready for more? Check out the quiz questions to try your hand at some questions on your own.

Types of Rhetorical Skills Questions on the ACT English

How to Read Scientific Graphs & Charts

How to Find the Theme or Central Idea

Impact of Word Choice on Meaning and Tone

Understanding Tone and Mood in a Reading Passage

How to Calculate the Probability of Combinations