Watch this video for an overview of the cultural groups of Native American people as they lived at the time of first contact with Europeans. Some of these groupings, like the tribes of the plains, changed so much due to the addition of European influences, such as horses, that there is only conjecture as to how exactly they lived before European contact. Updated: 08/28/2021
Create an account

Pre-Columbian Civilization: A Vast Land with Many Peoples

First, we have to recognize that this is a U.S. History course—to give complete details of the many nations that existed in what is today the U.S. is far beyond our scope. To give you an idea of the diverse cultures that inhabited the land before Europeans arrived, we'll be discussing the cultural groups of Native American members, not in all of North America, but instead just those within the Lower 48. We'll be looking at the following cultural groups: Northeast, Southeast, Southwest, Northwest Coast, and Great Plains.

There are a few more groupings, but this is a manageable list that should illustrate how unique these different groups are. 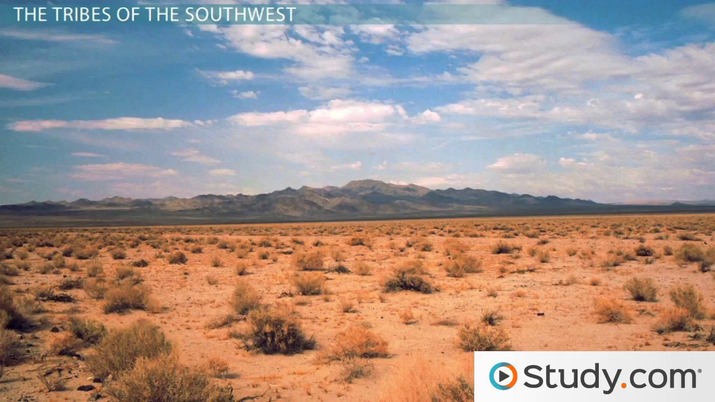 Coming up next: Effects of European Colonization: Christopher Columbus and Native Americans

The Tribes of the Northeast

These are the tribes that encountered the Pilgrims. Remember, Columbus never even touched the shores of what is today the U.S., so these people are completely different from those who were first encountered by the early explorers.

The tribes of the Northeast lived in the territory from the Atlantic shores to the Mississippi Valley and from the Great Lakes to as far south as the Cumberland River in Tennessee. The people in this group include the Iroquois and Algonquian citizens. These tribes relied on each other for a very long time for trade but also spent a great deal of time as warring enemies.

The Northeast tribes cleared forests to plant crops and used the lumber to build homes and make tools. The women of many of these tribes did all of the work with crops, while the men primarily hunted and fished.

An interesting note on the Iroquois tribe's social structure is that it was matrilineal. This means when a couple married, the man joined the woman's family. After marriage, the man was no longer considered a part of his birth family.

The Tribes of the Southeast

The Southeast cultural group stretched from the Atlantic Ocean to the Trinity River in what is today Texas and from the Gulf of Mexico north as far as points in modern-day Missouri, Kentucky, and West Virginia.

The tribes in this group included the Cherokee, Choctaw, Chickasaw, Creek, and Seminole. These are the people who would be referred to by white people as ''the Five Civilized Tribes.'' They were given this title because many of them decided to adopt the customs of the colonists. They are also the people who later were victims of the forced relocation known as the Trail of Tears.

The Southeastern tribes settled in river valleys. They were first and foremost farmers with hunting and fishing coming in second as their source of sustenance. They lived in various styles of houses like in the pictures here. They included thatched roofs and various styles for the sides. This picture is of a house with plaster sides on a river cane frame. The Cherokee members call this type of home an asi.

The Tribes of the Southwest

Many people have interesting, or should I say very incorrect, images of the people of the Southwestern tribes. This is because in old movies oftentimes these tribes were shown, but the imagery often used to represent them was more drawn from that of the tribes of the Plains. Many films show an Apache member happily standing next to a tepee… this could not be farther from accurate!

The Southwest cultural group territory goes from the south of present-day Utah and Colorado down through Arizona and New Mexico. This includes parts of Texas, California, and Oklahoma and continues into Mexico. These tribes all have the dry climate binding them together.

Two basic lifestyles developed in the region: farming and nomadic. Agriculture north of Mexico reached its highest level of development in the Southwest. Examples of farming, or agrarian, people include the Hopi, Zuni, and many other tribes. The nomadic groups include tribes such as the Apache, Navajo, and others.

Agrarian tribes like the Hopi and Zuni developed desert farming techniques that did not require irrigation. They relied on the little natural moisture the area does provide by using specific planting techniques and getting the crops in early in the season. They traditionally grew corn, beans, and squash. For meat, they also farmed turkeys and did some hunting.

Nomadic groups like the Apache tribe were hunters and gatherers. The men hunted deer, rabbits, and other game. The women gathered berries, nuts, corn, and other fruits and vegetables. Being nomads, they moved from place to place in search of resources. Interestingly, most in these groups did not eat fish, although fish were plentiful. The Navajo citizens were actually a farming people, and they lived in permanent dwellings, but they had two homes, called hogans—one in the mountains and one in the desert. Later their lifestyle included herding sheep. After the arrival of horses, both the Apache and the Navajo lifestyle became closely tied to riding horses.

The Tribes of the Northwest Coast

The Northwest cultural groups followed the West Coast all the way from Northern California all the way up to the southernmost parts of Alaska.

Tribes of the Northwest Coast had oceans, rivers, and forests to offer up plenty of fish and game. Even with very little agriculture, the Northwest Coast Native American citizens had more than enough food to support a dense population. Because of the readily available food and building materials for their large plank houses and seaworthy boats, the tribes had time to achieve an affluent, highly complex society.

Much of this society revolved around the custom of the potlatch, in which an individual's prestige and rank were determined by the quantities of material possessions he could give away. Chinook and Tillamook are two of the well-known tribes of this region.

The Tribes of the Great Plains

The people of the Plains region are the most known. Their imagery has been used to incorrectly represent many other tribes in popular culture. From the feathered headdresses to teepees, almost everyone is familiar with some aspect of these groups. The most well-known tribes of the area were the Sioux, Pawnee, Blackfoot, Crow, Cheyenne, and Arapaho.

This is a good time to note that many of the names today common for Native American tribes are actually not what the groups originally called themselves. As an example, the tribes today generally referred to as Sioux were the Dakota, Nakota, and Lakota people. Sioux was a name given to them by their enemies.

The Plains tribes covered much of the middle of what is today the U.S. and Canada. The Plains tribes are greatly tied to horse culture and the hunting of the buffalo, but remember, this lifestyle was not possible until the horse was introduced to the Americas by Europeans. Earlier, many of these tribal groups were hunter-gatherers and farmers who lived in villages or at least semi-permanent settlements. Many groups later moved into the Plains region to partake in the new buffalo-hunting horse culture.

Let's review. This was just a quick overview of the cultural groupings of Native American tribes by region. We did not cover every group and certainly not every tribe. The groups we discussed were the Northeast, Southeast, Southwest, Northwest Coast, and Great Plains. To truly learn about these peoples takes a great deal of study, just like any other unique cultural group in the world.

Native American History: Origins of Early People in the Americas

The Inuit & Aleut Civilizations of the Far North

What Is the Northwest Passage? - Explorers, Definition & History

What is Beringia? | Theory & Meaning

The Indian Wars: Struggle Between Native Americans and Settlers