View bio
Learn about prehistory in this lesson. Look at everything about prehistory, from the earliest appearance of humans to the development of stone tools, agriculture, animal domestication, permanent settlements and writing. Updated: 05/30/2020
Create an account

History is everything humanity has done since we first started recording the past through written records, sort of like a person's life before she or he starts remembering it. We know it happened, we just don't have any personal memory of it happening. Thus, it may be argued that everything that happened before the invention of writing is prehistory. Some scholars push this back as far as the creation of the universe, while others push it back to the development of life on Earth, and still others only push it back to the first appearance of human beings. In this lesson, we will briefly discuss pre- history in terms of the Stone Age and it's three major time periods: the Paleolithic, Mesolithic, and Neolithic. 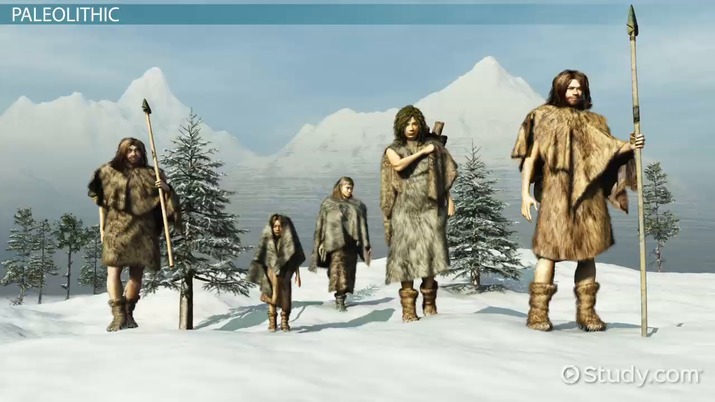 Coming up next: The Invention of Writing

Our species, Homo sapiens, first appeared about 200,000 years ago during the Paleolithic period. Paleolithic means Old Stone Age, because in that time, we had just begun to use stones as weapons and tools. Because of that, Paleolithic stone works are somewhat awkward and bulky. We know more than that about the Paleolithic period though. For one thing, we were the first and perhaps only species who could speak, and we developed that ability in the Paleolithic. Along with more efficient communication, we began burying the dead, tinkering with organized sound (that is, making music), and painting and carving objects. Throughout the period, the stone tools gradually became more sophisticated.

The Paleolithic period finally ended when the Ice Age did, around 10,000 B.C.E. That means that for the first 190,000 years of our existence, food was a rather scarce commodity. Humans were forced to move from place to place, exhausting all the food before moving on.

The Mesolithic or Middle Stone Age, was very different from the Paleolithic. Because the glaciers were gone, the northern and southern regions suddenly had a bountiful food supply. Forested regions were for the first time being cut down in small numbers. Flint was worked into small tools, which were used for many different things. Fishing tackle and stone adzes have been found and could have been used for fishing and shaping wood. Canoes and bows have also been dated to this time period.

With food more plentiful and the development of better tools and weapons to hunt and make use of animals, it's not surprising that the human population blossomed. With animals and environments more diverse than they had been for thousands of years, it also seems only natural that cultures that were more and more different from each other developed during this time period.

When we realized that we could plant seeds and they would grow into something edible, we moved into the Neolithic, or New Stone Age. In Mesopotamia and along the Nile, Indus, and Yangtze river valleys, this happened around 8,000 B.C.E., though some parts of the world only started farming around 4000 B.C.E. In some places, like the deserts of Eurasia or the plains of North America, we wouldn't start farming until only recently, if at all. When farming was used in any area, there was no longer a need to move every few weeks or months and settlements became permanent, and consequently grew larger.

It wasn't too long before writing was introduced too, though the time of its invention varied from area to area. In old world, in the major river valleys, it appeared as early as 3,600 B.C.E. The tribes on their borders were writing by 3,200 B.C.E. In the Americas, the first writing only goes back to about 500 B.C.E or so.

Here is a timeline base list of some of the important things that happened in the Stone Age, with all of the dates being rough estimates:

Prehistory can be defined as the span between the appearance of the first humans, about 200,000 years ago, and the development of writing. It is a huge amount of time and includes hundreds of cultures spread all over the world. In this lesson, we discussed prehistory in terms of the Stone Age and it's three major time periods: the Paleolithic (Old Stone Age), Mesolithic (Middle Stone Age), and Neolithic (New Stone Age).

The Paleolithic or Old Stone Age is characterized by the development of language, music, and art and ended with the last Ice Age. In the Mesolithic or Middle Stone Age, the environment was more diverse and humans improved their tools and began utilizing more resources and evolving varying cultures. And in the Neolithic or New Stone Age, agriculture and permanent settlements were first developed. This establishment of settlements is what allowed for the introduction of writing and an end to prehistory.

Write an essay of at least two to three paragraphs that explains the definition of prehistory. Be sure to include analysis of the different ways prehistory can be categorized.

Example: Some scholars define prehistory as beginning with the creation of the universe.

In approximately one page, write an essay that describes the main characteristics of the Paleolithic period. Be sure to answer the following questions: What were the major breakthroughs of this period? What problems did humans in this period face?

Example: One problem was the shortage of food availability.

Write an essay of approximately three to four paragraphs that explains the significance of river valleys during the Neolithic Age.

Example: Settlement along river valleys during the Neolithic Age gave rise to the development of agriculture, which caused people to adopt sedentary lifestyles, as opposed to nomadic ones.

In about three to four paragraphs, explain why the development of writing during the Neolithic Age was important. Pay special attention to answering the following question: How has writing affected the definition of prehistory?

Example: The end of the Neolithic period can be considered the end of prehistory, since that is when writing systems began to appear.

Make a chart, poster, or other type of graphic organizer that lists the main characteristics of the Mesolithic age.

Example: You could draw canoes and bows on your poster.

How to Read Timelines

The Fall of Rome