President James Polk may be obscure, but he wasn't insignificant. Learn about his controversial territorial acquisitions that define most of what Americans today call the 'Lower 48' states.
Create an account

In 1844, incumbent President John Tyler knew he had pretty much no hope of winning re-election. The two front-runners were Henry Clay (for the Whigs) and Martin Van Buren (for the Democrats), and neither of them were interested in Texas, which would mean Tyler's dream of seeing the republic annexed into the U.S. as slave territory would end with his term. But the American people were interested in Texas, and in a final show of strength, President Tyler organized a third party, drawing enough attention to the issue to force the Democrats to nominate James Polk instead of Van Buren.

A lot of Americans didn't know who Polk was outside of his home state of Tennessee, but he successfully linked Texas (which Southerners wanted) to Oregon (which Northerners wanted). And, he promised fellow Democrats that he would only serve one term, winning over former Van Buren supporters. The Democrats and their so-called 'dark-horse' candidate won the election. At the time, Polk was the youngest president ever elected at age 49. A lot of students today still say they don't know who Polk is, even though he proved to be an effective leader and accomplished most of his objectives within his promised four years.

Following Polk's election in 1844, the lame-duck President Tyler had the required support to finally pass a joint resolution in Congress annexing Texas. Tyler signed the legislation days before leaving office, even though Polk's election is often credited with making it happen. However, Mexico had never even recognized Texas independence and threatened war if the U.S. annexed Texas. By the time Polk was inaugurated, diplomatic relations with Mexico had been severed. 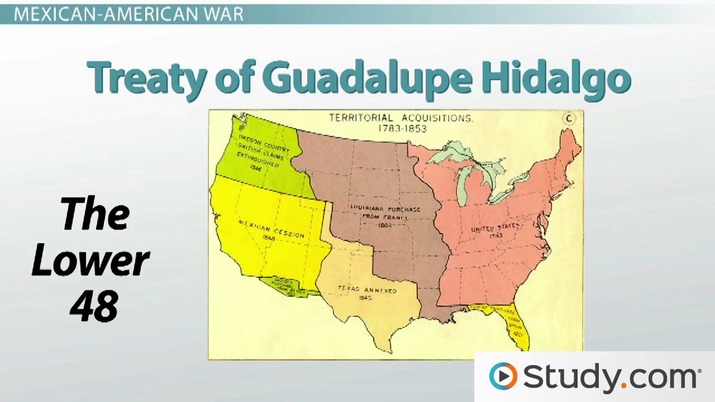 Coming up next: The Mexican-American War, Treaty of Guadalupe Hidalgo & the Wilmot Proviso

President Polk and others were concerned that Mexico might be planning to sell land to Britain to help them pay debts and separate their border from the U.S. Hoping to interrupt any such deal, Polk sent Congressman John Slidell to buy California and New Mexico from them - which represented about half of Mexico's remaining territory. At first, the Mexicans had believed Slidell was there to discuss the Texas situation. When they found out what he was really up to, Slidell was sent packing. President Polk responded by sending U.S. troops into disputed territory between Texas and Mexico in 1846. A month later, America was at war.

Unfortunately for Polk, his aggressive pursuit of 'all Oregon' during his election campaign had also put the U.S. on the brink of war with Britain. For nearly two decades, the two nations had argued about the boundary of the jointly-occupied Oregon Territory. President James Polk wanted all of Oregon, and he was not interested in a compromise with Britain. 'The only way to deal with John Bull,' he said, 'is to look him straight in the eye.' A public relations campaign endorsed the slogan '54 - 40 or Fight!' suggesting that America go to war to get all of the Oregon Territory. But Polk didn't really want war with Mexico and Great Britain at the same time, so he diplomatically secured the modern U.S./Canadian border at the 49th parallel in 1846. It wasn't 'all Oregon,' but he didn't have to fight for it or pay for it.

Meanwhile, the unpopular Mexican-American War raged. But true to his campaign promise, President Polk wrapped up this business before leaving office. In the 1848 Treaty of Guadalupe Hidalgo, the United States won the right to 'buy' all of California, New Mexico and the disputed Texas border - an area covering all or part of seven current states - for $15 million. As you can see from the map, the territory included everything now considered the 'Lower 48' states (aside from a small strip of land on the southern border of Arizona and New Mexico). Within three years of taking office, President Polk had achieved America's Manifest Destiny.

And though most Whigs had opposed the war as an unjust means of gaining territory, its successful completion caused a surge in nationalism. Unfortunately, it wasn't enough to override the divisive effects of the debate over slavery in the new land. The growing abolitionist movement was absolutely convinced that President Polk and the so-called 'Slave Power' were plotting to take over the nation. To be fair, he did own slaves his entire life, but just like George Washington, he had indicated in his will that all of his slaves be freed upon his wife's death.

During Polk's early days in office, thousands of 'Latter-Day Saints' (commonly called Mormons) left their homes in Illinois because of conflict with non-Mormon residents there. These pilgrims intended to leave the United States and settle in the wilderness to live out their beliefs in peace. They ended up in Utah - which, by the time they arrived, had been acquired by the U.S. in the Treaty of Guadalupe Hidalgo. Their handcarts and wagon trains have become iconic images of the American west.

In addition to territorial expansion, President Polk was also successful at achieving several of his financial goals for the nation. He changed the banking system (again) and lowered taxes with the Walker Tariff. His goal was revenue only, and not protection for manufacturing, which he felt was an unnecessary federal intrusion into the economy. Of course, Northern industrialists felt he was only protecting the South and slave power at their expense.

Then, he vetoed an internal improvement bill because it was what we would call today a 'pork bill.' Federal money had been designated to improve small ports that had no strategic value at the federal level. Polk claimed that if he allowed this to happen, Congressmen would start competing for favors from the federal government. James Polk also created the cabinet-level Department of the Interior, the first new executive department since 1792.

One of Polk's few failed goals was the acquisition of Cuba in 1848. He attempted to purchase the nearby island for the modern equivalent of $2.69 billion. In spite of the generous offer, Spain rejected it and Polk dropped the issue. After all, he had already expanded the U.S. landmass by a third in just three years! President Polk also failed to enjoy the retirement with his wife that he looked forward to. His ambitious one-term presidency wore him out; he died a few months after leaving office.

Let's review. In the presidential election of 1844, the Democratic Party nominated dark-horse candidate James Polk for president. His proposal to annex both Texas and Oregon, and his promise to serve just one term, pushed him over the edge to defeat Whig candidate Henry Clay. Though he was not, and still is not, well-known, President Polk was successful at achieving his controversial goals.

Before Polk even took office, his predecessor President Tyler had signed a joint resolution of Congress annexing Texas. Mexico threatened war. Fearing that Mexico might sell its border land to Britain, Polk sent a diplomat to try and buy it first. Mexico refused, so Polk sent troops to occupy the disputed border of Texas in 1846. The Mexican-American War erupted, and within two years, the United States had defeated Mexico. The Treaty of Guadalupe Hidalgo gave America the right to buy the territories of California and New Mexico. Meanwhile, Polk avoided war at the northern border by negotiating the Oregon Territory with Great Britain, establishing America's modern border with Canada at the 49th parallel. President Polk also brought the nation's economic system more in line with southern Democratic goals by reducing tariffs, banks and internal improvements.