As the fourth president of the United States, James Madison faced many challenges. Discover how Madison worked to improve the domestic banking system and infrastructure while at the same time confronting British impressment which led to the War of 1812. Updated: 03/03/2022
Create an account

James Madison, the 4th president of the United States, wasn't exactly known for his physical presence. But what he lacked in stature, he more than made up for with the brilliance of his mind. James Madison is considered the ''Father of the Constitution'' because he was primarily responsible for its drafting. A Democratic-Republican who favored a limited federal government, Madison was a brilliant Founding Father who profoundly shaped the American Republic. Let's learn about his presidency by focusing specifically on his domestic and foreign policy. 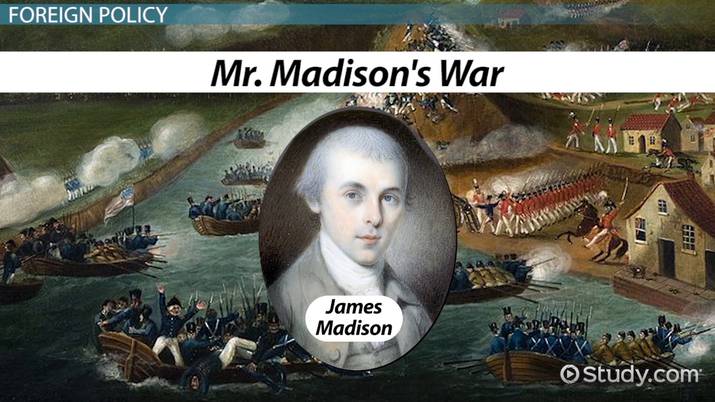 Before his presidency, James Madison was Thomas Jefferson's Secretary of State. He was elected president in the Election of 1808 and served as president for two terms, between 1809-1817. In many ways, Madison carried on the policies of his predecessor, President Jefferson.

One of the major domestic issues facing Madison was what to do about the national bank. The First Bank of the United States had been championed by Alexander Hamilton and chartered in 1791, for a term of 20 years. With the charter set to expire by 1812, Madison was faced with a dilemma. As a Democratic-Republican, he tended to oppose a national bank, believing it was an overreach of federal power. In 1811, the Democratic-Republicans allowed the charter to expire. However, after the War of 1812 broke out, Madison came to realize a national bank was a virtual necessity for waging war. He finally signed off on a bill to charter the Second Bank of the United States, which was basically a replacement national bank after the expiration of the First Bank of the United States. Many of Madison's fellow Democratic-Republicans were furious and claimed he had ''sold out.''

Also, like Jefferson before him, Madison took a relatively accommodating approach to Native American relations, especially compared to subsequent presidents like Andrew Jackson. He preferred that Native American groups voluntarily assimilate into American culture. Depending on the circumstances, there were even occasions where Madison authorized government troops to protect Native lands from being acquired by white settlers. Even so, as westward expansion proceeded rapidly throughout the Madison Administration, he was ultimately powerless to prevent Native American groups from being pushed off their land.

In addition, Madison was president at a time when the U.S. was involved in increased industrialization and commerce, and he signed legislation promoting these advances. He supported the infrastructure improvements championed by Henry Clay and others. Known as the American System, this economic plan sought to unify the nation through improved transportation, restrictions on imports, and the power of the national bank.

Even so, Madison was fearful of giving the federal government too much. He wanted the U.S. to develop into an industrial and commercial powerhouse, but ideally he wanted that to happen privately. Because of his commitment to republican values and his desire to limit the power of the federal government, he vetoed the Bonus Bill of 1817, which provided extensive government funding for improving transportation infrastructure.

Any discussion of foreign policy under President Madison has to be understood within the context of the War of 1812. The War of 1812 was fought between the U.S. and Great Britain between 1812 and 1815. The war was fought over several issues, including trading rights, territorial disputes along the Canadian border, and perhaps most notably over the issue of impressment. Impressment was a popular practice of the time that involved basically kidnapping foreign sailors and forcing them to fight in the kidnapper's navy. The British Royal Navy at this time had been kidnapping American sailors and impressing them into service in the Royal Navy. When negotiations broke down, Madison decided enough was enough.

The War of 1812 was and is often referred to as ''Mr. Madison's War'' because Madison and his fellow Democratic-Republicans supported it, while the opposition party, the Federalists, generally did not. Federalists accused Madison of engaging in war for political purposes. One Federalist senator regarded the war as ''a war of party and not of country.'' In Baltimore, tension between anti-war Federalists and Democratic-Republicans erupted into brutal violence.

Fighting during the war took place mainly in Canada, the Great Lakes region, along the Gulf Coast, and at sea. The War of 1812 ended in 1815 after the Treaty of Ghent was signed. The war ended as more or less a draw, with no clearly defined victor. With the war, the U.S. emerged as a dominant world power. Following the war, a new era of relative peace was ushered in. Madison's leadership during the war, and the peace and prosperity that followed it helped secure his reputation as an effective president.

Let's review. The national bank was a major issue for Madison. The First Bank of United States had been championed by Alexander Hamilton and was chartered in 1791, for a term of 20 years. Madison tended to be against the idea of national bank, but after the War of 1812 broke out, he agreed to charter the Second Bank of the United States, which was a replacement national bank after the expiration of the First Bank of the United States. The American System was a wide-ranging economic plan to unify the nation through improving transportation, restrictions on imports, and the power of the national bank. Madison generally supported it, although specific parts of it he was wary of. For example, he vetoed the Bonus Bill of 1817, which provided extensive government funding for improving the transportation infrastructure.

The War of 1812 was fought between the U.S. and Great Britain between 1812 and 1815. One of the major causes of the conflict was British impressment of American sailors. The British Royal Navy at this time had been kidnapping American sailors and impressing them into service in the Royal Navy. The War of 1812, sometimes known as ''Mr. Madison's War'', ended in 1815, after the Treaty of Ghent was signed.