John Adams helped found the United States, providing support for the Revolution and later serving as the nation's second president. Learn about John Adams and the important events during his presidency, including the Alien and Sedition Acts, the XYZ Affair, and the Midnight Appointments. Updated: 08/16/2021
Create an account

The legacy of John Adams is so much more than the accomplishments and failings of his presidency! Before Adams was President of the United States, before he was Vice President, he was one of the driving forces behind the Revolution.

Adams' fiery and quite blunt passion as a patriot was of unquestionable importance. He was a mentor to Thomas Jefferson, although they became major political rivals. He knew, or at least was advised by his wife Abigail, to temper his direct and abrasive style by utilizing the skills of others, such as Jefferson, for tasks which required an eloquence he did not possess.

In this lesson, we'll look at the most lasting actions of Adams' presidency: his handling of the XYZ affair, the Alien and Sedition Acts, and the Midnight Appointments. 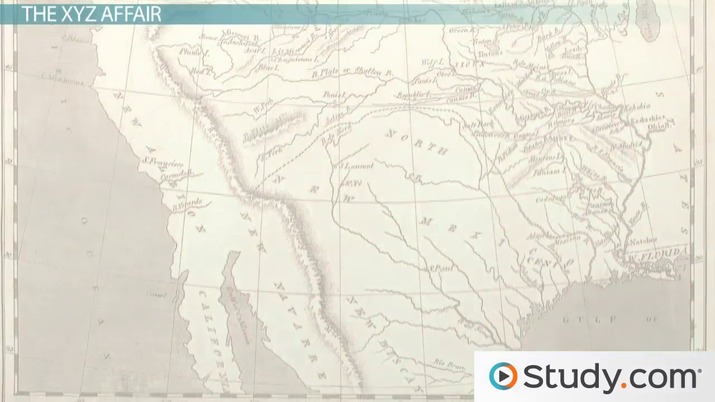 Coming up next: President Jefferson's Election and Jeffersonian Democracy

The signing of the Jay Treaty that averted war with England and settled issues with the Treaty of Paris, which had ended the Revolutionary War, actually angered a lot of Americans and Europeans. Many Americans saw the treaty as a humiliating surrender to the British. French leaders saw it as a step toward the U.S. allying with the British, which was a breach of the 1778 treaty between France and the U.S.

John Adams took office in 1797, and he walked into dealing with several issues left by President Washington, including difficult dealings with France - our most important ally! Because of the Jay Treaty with England, French forces began attacking American ships. In an attempt to set things right with France and make the seas safe again for American ships, President Adams sent three commissioners to France: Charles Pinckney, who was the United States minister to France; John Marshall, a lawyer from Virginia and future Supreme Court Justice; and Elbridge Gerry, future Vice President under James Madison.

When the three commissioners arrived in France, they weren't exactly welcomed through the official channels to begin negotiations. Instead, they were met by three agents of the Foreign Minister Talleyrand. Instead of giving their names in their official report, the commissioners labeled these men X, Y, and Z - hence the scandal's name. The agents demanded a $250,000 bribe to meet with Talleyrand and a $12,000,000 loan! At the time, bribes in politics were normal, but this was ridiculous. Pinckney's response to the men was, 'No, no, not a sixpence!'

The commissioners' report to Congress was made public, and Americans were irate! Even the Democratic-Republicans, who had staunchly supported the French, were supporting the rallying cry: 'Millions for defense, but not one cent for tribute.' Many people wanted war, especially Adams' fellow Federalists, but President Adams refused to declare war. Instead, he emphasized the importance of building up the military.

Congress stopped trade with France, dropped the alliance with France, tripled the size of the army, and commissioned the building of 40 ships for the newly created department of the Navy. The newly built-up military needed strong leadership, so President Adams got President Washington to come out of retirement to lead the American military once again.

The newly created Navy, along with some American privateers, went ahead and made shipping a nightmare for the French. In 1798 and 1799, Americans seized almost 90 ships!

The XYZ Affair shows Adams at his finest. It shows his willingness to do what he felt was right for the country instead of merely what was more important for his party. Alexander Hamilton was leading the Federalists' push to war, but President Adams stuck to his guns and did not succumb to his party's pressure. He was convinced that war with France would lead to a civil war for the States.

And, it turned out, war wasn't necessary. What has been called the Quasi-War had been enough, and Talleyrand was ready to talk. He invited the U.S. back to negotiate; however, by the time the Americans arrived to negotiate, Napoleon had come to power in France. He immediately cut ties with the U.S. to focus on his own agenda. Had President Adams not held the States back from war, it is quite possible that the Louisiana Purchase would not have come to be in 1803!

The Alien and Sedition Acts

For every finest hour, there has to be a darkest - the Alien and Sedition Acts. Following the French Revolution and the States' 'quasi-war' with France, partisan tensions were high. The Federalists were in control of Congress, and Adams was president. Democratic-Republicans in some states were refusing to enforce federal laws. There were even some calls for secession. Some began to fear something like the French Revolution spreading to the States. Some Federalists feared anarchy. Others feared losing power, but it led to the Federalist-controlled Congress passing the Alien and Sedition Acts, which were signed into law by President Adams.

Many Federalists saw this all as having been caused by French and French-sympathizing immigrants. The acts were meant to guard against this threat of anarchy.

The Alien and Sedition Acts were a group of four bills passed:

Obviously, just a couple of decades earlier, the people of the United States had fought a war in the name of freedom and the rights of individuals. These acts were an affront to everything the Revolution was about. Even though there were real fears to be defended against, this was unacceptable in the U.S. The Alien and Sedition Acts are one of the major factors in President Adams not winning a second term and are a stain on his legacy. If it weren't for the Alien and Sedition Acts, maybe Adams would have a monument like Jefferson's in D.C. After all, Adams was Jefferson's mentor before he became his political rival.

The lasting legacy of his presidency is the Midnight Appointments. The power of the Federalists was annihilated in the election of 1800. They lost both houses of Congress, and Thomas Jefferson, a Democratic-Republican, won the presidency.

During the lame duck phase from the time of the election until the new government is sworn in, President Adams and the Federalist Congress passed the Judiciary Act of 1801. It is the same legislation that Adams had proposed early in his term. Adams used his authority under this act to pack the courts with Federalist judicial appointments during the final two months and up to the last days of his administration.

These appointments would lead to the use of judicial review in the American political process and many other important advents of the development of the judicial system. Presidents today still use their final time in office to push through last minute agendas that may or may not be popular, especially if they have a 'friendly Congress.' What I mean is a Congress that will pass their legislation up to them and allow them to sign it quickly at the very end.

In recap of Adams' presidency, we covered three important parts of American history.

In the XYZ Affair, Adams showed his dedication to doing what he truly believed right for the country by averting war with France. On his grave it does not say, 'President;' it says, 'Here lies John Adams, who took upon himself the responsibility of peace with France in the year 1800.'

The Alien and Sedition Acts were a blight on Adams' legacy. Signing these acts into law ignored the rights the U.S. held so dear in the name of defense and order.

Lastly, the Midnight Appointments assured that Federalist ideas would have a legacy in the American government and set the U.S. judiciary on its future path.