Copyright
Lesson Transcript
Instructor: Steven Shirley
President John Quincy Adams made a deal with Henry Clay to win the election of 1824 but at a price. Learn about the list of candidates of the 1824 election with a special look at John Quincy Adams, the deal between Adams and Clay, and the Adams administration. Updated: 08/19/2021
Create an account

Election of 1824: American Politics at the Crossroads

By 1824, the United States had been led by five strong presidents and personalities:

Jefferson, Madison, and Monroe came to be known as the Virginia Dynasty, and were not only presidents but founding fathers of our young nation. Following these gentlemen was no easy task and would prove difficult for any aspiring politician seeking the White House in 1824. 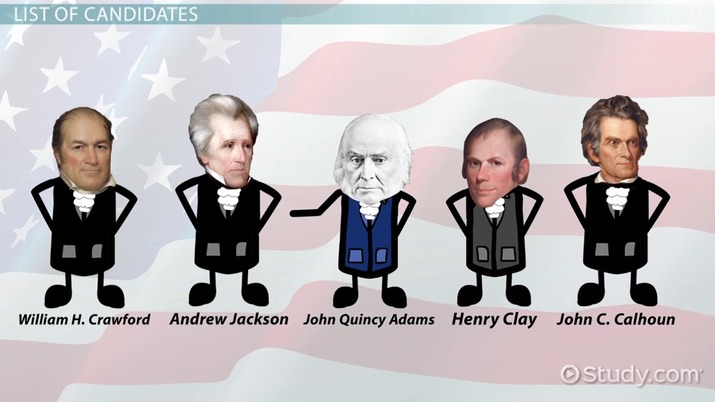 Coming up next: President Andrew Jackson and the Age of the Common Man

With no clear candidate to inherit this mantle, the election was an open race with a crowded field. Men of considerable talent, intellectual ability, and gravitas entered the race to vie for the ultimate prize in American politics, the presidency. Who were these men?

John C. Calhoun of South Carolina, a longtime member of Congress and former secretary of war under James Monroe. He wouldn't last till the end of the race, preferring instead to drop out and ally himself with the eventual winner and become vice president. Smart move.

William H. Crawford of Georgia, seen as an early favorite in the election, was himself a senator, a former ambassador, and secretary of war.

Andrew Jackson of Tennessee, 'Old Hickory' as he was known, was anything but the darling of the District of Columbia. But, he was a populist and popular politician, not to mention a war hero. Perhaps a little rough around the edges, but Jackson was highly respected for his political acumen.

Henry Clay of Kentucky, the powerful speaker of the House of Representatives, would be a major player in the ultimate outcome of 1824—not to mention a vehement critic of Jackson.

And then there was John Quincy Adams, son of…well you guessed it, our second president, John Adams.

Living in his father's shadow was never easy but John Quincy Adams managed a distinguished career as a lawyer, a diplomat, and eight years as secretary of state. Indeed, John Quincy Adams was one of the most influential secretaries of state in our nation's history, helping author one of the most important foreign policy decisions of our young nation, the Monroe Doctrine. But, would that be enough to make him president?

What made matters more difficult was the fact that in 1824, there was no two-party system like we have today. Political parties were more diverse, and candidates were more free to act and build a coalition of supporters.

This meant that endorsements and political experience were important. Because of the support of two former presidents, Madison and Jefferson, the early favorite was Crawford. However, as the campaign got underway, it became clear that this was going to be very different than any other election. First, Crawford suffered a stroke, which severely hampered his campaign, and his own party split into two parts.

By the time the dust cleared on election day, none of the five candidates had secured enough electoral college votes to win the presidency. For the first time in our nation's history, there was no clear presidential winner after the election. Jackson secured 99 electoral votes and Adams 84. However, neither captured a majority of the votes. With the rest of the votes scattered among Clay and Crawford, there was no clear winner.

Well, the failure of any candidate to get a majority of the electoral votes kicked in one of the most unique features of our presidential election system—the 12th Amendment of our Constitution. The new president would now be chosen not by the people or the Electoral College, but by the House of Representatives. Since only the top three vote-getters qualify in such a circumstance, Henry Clay's name was dropped from the list of possible candidates presented to the House of Representatives. Crawford, given his health and his poor showing in the initial vote, was also not a serious contender.

As the time for the vote in the House neared, Clay used his considerable influence to block Jackson's ascent to the office. Clay did not like Jackson. While he had no real love for Adams, he at least felt he could strike a deal with him. He'd help get Adams's elected president only if Adams would name Clay secretary of state. Clay believed that the job of secretary of state was the perfect launching pad for his future presidential ambitions.

Adams agreed. The deal was struck.

The deal concluded behind the scenes soon came to be known in the Jackson camp as the Corrupt Bargain. And, they went on the political offensive almost immediately. Because of the vibrant opposition of Jackson supporters, Adams never enjoyed a honeymoon period in the White House, and he would have to endure the political assaults for the next four years.

Some of the attacks may sound familiar to you political junkies even today. They accused Adams of being a 'big government' president who wanted a larger role for the federal bureaucracy to meddle in economic affairs. They blasted Adams for his 'cronyism'; that's when you give top jobs to your friends and supporters.

No doubt the attacks hurt Adams personally and affected his ability to lead as president. While a remarkable secretary of state, John Quincy Adams was unremarkable as president. He was unable to bring his considerable diplomatic acumen to bear on any real crises or problems facing the U.S. at the time.

We were between wars. There were no real foreign threats. And, the treaties he formed were of minor consequence. He was a man of great ability but without the ability to apply it.

On the domestic front, his tepid dealings with Native Americans and his big-government policies never really resonated with the American public, and in the South, there was a growing fear that Adams and his like-minded administration would push for the abolition of slavery—and back it up with the power of the federal government.

By 1828, his hopes for re-election were dim and soon faded to black as Andrew Jackson rode a wave of populism and electoral dominance to the White House, handily defeating Adams.

Adams would quietly leave the White House and public life after his defeat. But, he was elected to the House of Representatives in 1830 by the people of Massachusetts, and there he would stay until his death in 1848: our sixth president, a public servant to the end, and forever tied to the unique election of 1824.