James Madison was president of the United States during the War of 1812. Explore the issues America was facing at the time Madison was elected, discover key people and their significance to the war, and learn about the important battles. Updated: 08/19/2021
Create an account

Madison's Trouble in the West

When Thomas Jefferson announced his retirement, his secretary of state and the 'Father of the Constitution,' James Madison, was easily elected the fourth president of the United States, continuing the Virginia dynasty. He inherited a mess. The economy was struggling, he essentially had a war on two fronts and the political system was in shambles. Sounds like the kind of problems modern presidents have had to deal with.

First, let's go back - back to the beginning. Native Americans had lived up and down the East Coast until Europeans came. Ever since that time, they'd been pushed steadily westward into conflict with whites and each other. They had been safe beyond the Proclamation Line after 1763, but then the 1783 Treaty of Paris delivered all of that land into American hands, and white settlers poured in. It seemed there was nowhere safe for many tribes to go. Native Americans found themselves faced with a dilemma: join 'em or beat 'em? Madison had taken office when a group based in present-day Indiana finally decided to try and beat 'em.

A Shawnee leader named Tecumseh and his brother (who was commonly called 'The Prophet') organized a social network to revive native religion, resist all white ways and oppose the U.S. government. They believed they would gain a northwest state for themselves. After building Prophetstown at the junction of the Tippecanoe and Wabash Rivers, they began attacking settlements. The governor of the newly created Indiana Territory was General (and future president) William Henry Harrison. After learning that the British were supplying money and weapons to Tecumseh, Harrison attacked and destroyed Prophetstown at the Battle of Tippecanoe. However, the resistance and attacks on settlements continued on as part of the broader War of 1812 until Tecumseh himself was killed. 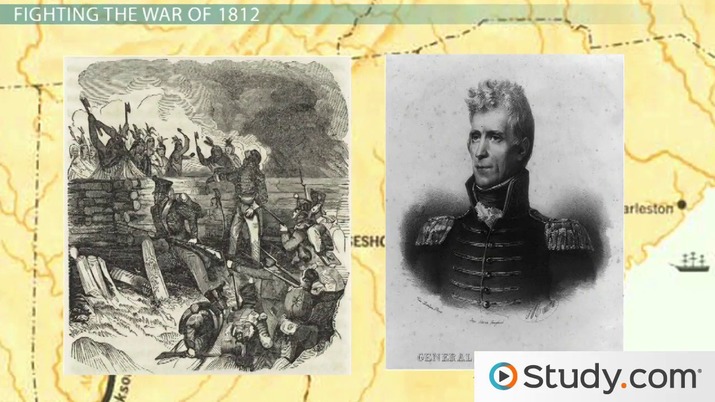 Coming up next: James Madison After the War of 1812: The Era of Good Feelings

Madison's Trouble in the East

The War of 1812 is kind of a black hole in American history. Most people know that it happened, but not many people seem to know anything about it. So let's start with some big things: Two future presidents were heroes of the War of 1812. The White House was burned down. America's national anthem, the 'Star-Spangled Banner', was written during one of its battles. And, it's why the Native Americans ended up west of the Mississippi River. If you can accept that these events make the War of 1812 worth understanding, maybe you can believe that this so-called 'second war of independence' is when Britain finally acknowledged that the United States had grown up and moved out, so to speak.

Since taking office, Madison had been trying to maintain U.S. neutrality in the Napoleonic Wars. But Britain seemed determined to drag its former colonies into war. Congress lifted the Embargo Act of 1807, but then Britain interfered to keep America from trading with France. More importantly, the British navy had a desertion problem. Many sailors who had been pressed into service jumped ship as soon as they had the chance, so for years the British fleet had been stopping American ships to search for their deserters, sometimes pressing American citizens into service to boot.

The trade restrictions and impressment controversy were frustrating, but each of them alone wasn't really enough for President Madison to want to declare war on Britain. But then you add in the fact that Britain had been helping the Indians fight on the frontier, and together all of these factors were just a little too much for some people. The so-called 'War Hawks' in Congress convinced President Madison to declare war in June 1812. Federalists in the Northeast strongly opposed the war, but they didn't have enough clout to keep the President from being reelected that year.

President Madison hadn't really been prepared for a prolonged war. He was under the delusion that with Britain at war with France, the state militias could easily capture Canada, and a treaty would quickly follow. But Britain had its own army and navy, plus the coalition under Tecumseh and Canadian troops. The invasion of Canada was a total failure. But three battles in 1813 did help the U.S. get control of the western frontier. First, William Henry Harrison secured Detroit and finally defeated Tecumseh in the same fight. Then Commodore Oliver Perry captured an entire British naval squadron in the Battle of Lake Erie. Farther south, General (and another future president) Andrew Jackson defeated the Creek nation in 1814, subduing the Indian resistance. It wasn't a moment too soon for the Americans, since the war in the East was about to get a lot more difficult.

Britain's Royal Navy had finally run Napoleon out of town and put France in its place. Now they turned all of their attention to fighting America. The British navy waged fierce war at sea, and troops poured into the East Coast, fighting costly battles against weak American militia forces. They set fire to Washington, D.C., including the Capitol building and the White House. Thankfully, most of the city was saved by a freak rainstorm, and the president's wife, Dolly Madison, had the foresight to rescue some treasured items from their home, including George Washington's portrait and possibly an original copy of the Constitution.

Next, the British navy tried to capture the strategic city of Baltimore, blasting Ft. McHenry all day and most of the night. An American lawyer named Francis Scott Key had crossed enemy lines to negotiate a prisoner exchange and was being held on a British ship throughout the battle. He watched intently, but when the barrage stopped, it was too dark for him to see whose flag was flying over the fort. Had the British barrage stopped because the walls had been breached, or had they given up? He wouldn't be able to tell until dawn. When he saw an American flag in the morning, he was inspired to write a poem, which was later set to music, and the first verse became America's national anthem in 1916.

Three events began to unfold simultaneously. Leaders on both sides could see that neither side had much to gain by continuing the war, so diplomats in Ghent (called Belgium today) started talking peace. But few people in America knew about that. Federalists in New England, who had opposed the war from the beginning, met to discuss seceding from the Union. They planned to form a new nation and negotiate a favorable peace treaty with Britain on their own. Also, at the same time, a British fleet was heading toward New Orleans.

The first of these parties to conclude their business were the diplomats in Ghent. They reached an agreement on Christmas Eve 1814, and the Treaty of Ghent essentially returned everything to the way it had been before the war started. Britain abandoned their Indian allies once again but did pay the U.S. government for a number of slaves who had escaped to Canada. But news traveled slowly from Europe to America back then, and the British threw everything they had at New Orleans, intending to seize control of the Mississippi River. Andrew Jackson mounted a seemingly miraculous defense with a force made up of state militia, pirates, free blacks and a few regular army soldiers. He killed the British general in charge and won the Battle of New Orleans. News of the victory reached Washington about the same time that news of the Treaty of Ghent arrived, and as it just so happened, that was exactly when the New England Federalists were about to deliver their secession demands to the President. That was the end of the Federalist Party in America.

Congress ratified the Treaty of Ghent on February 17, 1815. Despite heavy casualties and gaining basically nothing, the U.S. felt they had defended themselves in a second war of independence against Britain, boosting American self-confidence and nationalism. An 'Era of Good Feelings' was about to begin.

Let's review. President Madison took office facing several grave difficulties. Native Americans under the leadership of Tecumseh were fighting against U.S. expansion at the same time Great Britain was also trying to pull the U.S. into war. Governor of the Indiana Territory and future president William Henry Harrison weakened the Indian resistance at the Battle of Tippecanoe, but news of British support for the rebellion angered Americans and helped lead to a declaration of war. The War of 1812 lasted for two-and-a-half years. Commodore Perry defeated the British navy in the Battle of Lake Erie, and together with Harrison's defeat of Tecumseh and Jackson's southern victory against the Creeks, the war on the western frontier was subdued.

The eastern front heated up after Britain defeated France and devoted its attention to invading the East Coast. Despite initial success, including burning Washington, D.C., they couldn't capture Baltimore. The bombardment of Ft. McHenry inspired America's national anthem. About the same time that diplomats were finishing peace negotiations, Jackson was fighting the Battle of New Orleans. News of the Treaty of Ghent and Jackson's victory reached Washington right when New England Federalists were about to announce their secession. The party crumbled, the British were sent packing and America entered an 'Era of Good Feelings.'

President Madison and the War of 1812
Related Study Materials