John Tyler's presidency was rife with opposition from members of the United States Congress, including their making him the first president to be impeached. Learn more about Tyler's accomplishments in pushing for American expansion, and how many southerners left the Whig Party to join the Democrats. Updated: 08/19/2021
Create an account

Imagine a politician who stands by his principles, even if it costs him an office. He takes his work seriously and fulfills each obligation as if it were the most important task of his lifetime. He holds his head high, even when he is mocked and even when others get credit for his accomplishments. He served as a state legislator, U.S. congressman, senator, governor and vice president. Sound like a good man for the executive office? Would you be surprised to hear that this politician, John Tyler, was recently voted one of the worst presidents in American history? Listen to his story, and see if you agree.

The young, Virginia statesman entered national politics in 1816, when the previous congressman died. (And it wouldn't be the last time he held this dubious honor!) He was just 26 years old. As with most politicians of the day, he was a Democratic-Republican; unlike many of them, he still believed in Jeffersonian Democracy. How did a Southern, slave holding, strict constructionist, states' rights champion end up on a Whig Party presidential ticket in the first place? To understand this, we need to go back to John Tyler's earlier political career. 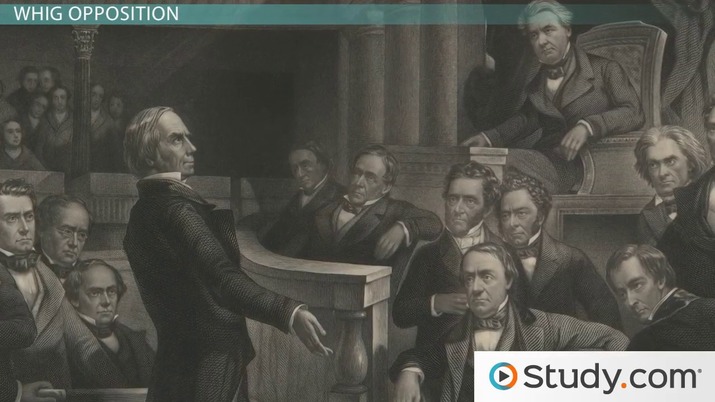 Coming up next: President James K. Polk's Accomplishments in the Lower 48 States

He had returned to state politics after voting against the Missouri Compromise, becoming a popular governor of Virginia. But his state legislature sent him back to Washington in 1827 as a senator. By this time, the Democratic-Republican Party had splintered; Tyler sided with the Democrats and Andrew Jackson, who held similar views on issues, like the national bank. But he got in trouble with the party leadership after condemning Jackson's unprincipled actions, like granting government positions to political supporters and using executive order to accomplish his goals. Tyler resigned his senate seat rather than be forced to choose between his principles or the Democrats that had elected him. This put him in the uneasy position of aligning with the anti-Jacksonian Whig Party under the leadership of Henry Clay, even though he opposed Clay's American System of tariffs, internal improvements and a national bank.

In the 1840 presidential election, the Whig Party was looking for a ticket to defeat incumbent President Martin Van Buren. They chose William Henry Harrison - the old hero of the Battle of Tippecanoe - as their candidate. John Tyler seemed like a perfect running mate, even though he never endorsed the Whig platform, since he could draw Southern votes away from the Democratic Party. With one of the most memorable political slogans ever created, 'Tippecanoe and Tyler, Too!' were successful. And as planned, President Harrison was little more than a puppet for Henry Clay for all of his 30 days in office.

President Harrison, after delivering a two-hour inaugural address in a freezing cold rain, contracted pneumonia and died, leaving the nation to face a new Constitutional crisis: Does the vice president actually become the president, or does he just fulfill the duties of the office? Tyler believed it was the former, asked to take the oath of office and gave an inaugural address. Ironically, John Tyler became America's tenth president in 1841 under the same circumstances as his first federal office, prompting his opponents to secretly call him 'His Accidency.' But Henry Clay found that Tyler wouldn't be so easy to dominate as Harrison had been. Thus began a contentious one-term presidency that split the political parties along sectional lines and led the nation even closer to the Civil War.

At first, Tyler signed several pieces of Whig legislation, including the Log Cabin Bill that gave squatters first rights to buy federal land at low prices. But then Henry Clay, the leader of his own party, presented Tyler with a number of banking bills, knowing he would veto them. It was an attempt to discredit Tyler in the next election, which Clay hoped to win. Next, Clay convinced all of the cabinet but one, Daniel Webster, to resign on September 11, 1841, hoping that Tyler himself would then resign. He did not, and President Tyler was officially kicked out of the Whig Party.

Congress repeatedly rejected the people he nominated to fill the vacant cabinet positions. Ultimately, all but one of his cabinet members were Southerners. When these men left the Whig Party, it forged a regional split in which the Whigs became the 'Northern party' and the Democrats became the 'Southern party'. From this point on, Congress voted in opposition to pretty much every domestic policy he supported. Two Supreme Court seats opened up, and Congress rejected four of Tyler's nominees before one of them was finally confirmed. The other seat was never filled, as the Senate hoped Henry Clay might fill it.

The final breaking point came with a conflict that sounds like it could be lifted from the pages of any newspaper today. His entire political career, Tyler had opposed higher tariffs and federal growth. But now the government was facing a severe budget deficit. He called a special session of Congress and proposed a compromise: raise some of the taxes, but cut spending on internal improvements. The Whigs countered with a bill that raised taxes as well as spending. Tyler vetoed it, and the budget battle raged for over a year. Citing Tyler's misuse of the veto for policy reasons, Congress initiated impeachment proceedings against a president for the first time ever in 1842.

For all of his problems in Washington, Tyler did manage some foreign policy accomplishments, including international trade agreements with China and Germany. The Webster-Ashburton Treaty resolved a long-standing border dispute between Canada and Maine, and the Seminole War was finally brought to an end. But the platform that was most important to President Tyler was expansion, and though he doesn't get much credit for it (or blame, depending how you look at it), he actually made important strides toward Manifest Destiny, America's goal of stretching over the entire continent. The navy was increased significantly, Florida became a state and he took steps toward annexing Hawaii.

Texas would prove more elusive. Tyler aggressively pursued annexation, believing it would help him win reelection. But he kept his treaty negotiations secret, knowing that Congress would just oppose anything he presented. Before Tyler had a chance to present the treaty to Congress, tragedy struck. The president and several high-ranking government officials took a pleasure cruise on the navy ship Princeton for a PR stunt to show off the world's largest naval gun. The weapon was fired twice without incident, but at the crowd's urging, the captain agreed to one more shot. The gun misfired, killing several people, including the two most important diplomats in the Texas negotiation. His plan unraveled, Tyler's treaty was rejected in the Senate and all of his hopes for reelection vanished. However, he formed a third party to help ensure that the pro-Texas candidate, James Polk, was elected over Henry Clay (the Whig candidate). Tyler was satisfied. After the election, but shortly before his term ended, he signed the bill admitting Texas to the Union.

A 2011 ranking of American presidents put Tyler at number 37 out of 42. His partial term in office probably did more to finalize the North-South political split than any other politician until Lincoln. Certainly he was stubborn, and he held fast to policies Americans generally accept as wrong, like slavery. But was he solely to blame for the national divide? In 1861, Tyler led the compromise effort to preserve the Union after South Carolina seceded, but once again, he couldn't get Congress to support him. President John Tyler died as a member of the Confederate House of Representatives, the only U.S. president ever to be denied an official Washington funeral.

John Tyler entered national politics after a congressman died, adhering strictly to the Jeffersonian Democrat platform. Later, as a senator, he fell out of favor with the party leadership because of his opposition to President Andrew Jackson's methods. He aligned with the anti-Jacksonian Whig Party, and although he didn't support their platform, the Whigs nominated Tyler for vice president in 1840. 'Tippecanoe and Tyler, Too!' were elected. But Harrison died just a month into his term, and Tyler set the example of actually becoming the president rather than just fulfilling presidential duties.

Dubbed 'His Accidency,' President Tyler was again at odds with his party, which disowned him after he rejected their banking bills. They opposed almost all of his actions, and many Southern Whigs left the party to join the Democrats, dividing the nation along sectional lines. When Tyler vetoed a bill that increased spending during a budget crisis, Congress began his impeachment. Still, President Tyler did accomplish some foreign policy, including the Webster-Ashburton Treaty, and pushed the nation closer to its Manifest Destiny. His treaty to annex Texas was rejected, but he signed a bill accepting the republic into the Union after the presidential election in which he was defeated.