Lesson Transcript
Instructor: Daniel Vermilya
The presidential election of 1824 was one of contention and confusion that changed the American political landscape. Learn about the candidates of the 1824 election, the results and the significance of the election. Updated: 09/13/2021
Create an account

Background to the 1824 Election

Of all the presidential elections in American history, a few stand out in terms of their importance and confusion. The 1824 election was one of those. The election was ultimately decided in the U.S. House of Representatives, and its aftermath changed the American political landscape for the rest of the 19th century.

In the early 1800s, major political transformations were occurring in the young United States. Following the presidencies of Thomas Jefferson, James Madison, and James Monroe, the Federalist Party had withered on the vine and no longer had an influence on national politics. This period was as close as the United States had ever come to truly having a one party political system. The Democratic-Republican Party was firmly in power, and there was no end in sight. During the presidency of James Monroe, this time that featured a lack of partisan bickering led to what is known as the Era of Good Feelings. 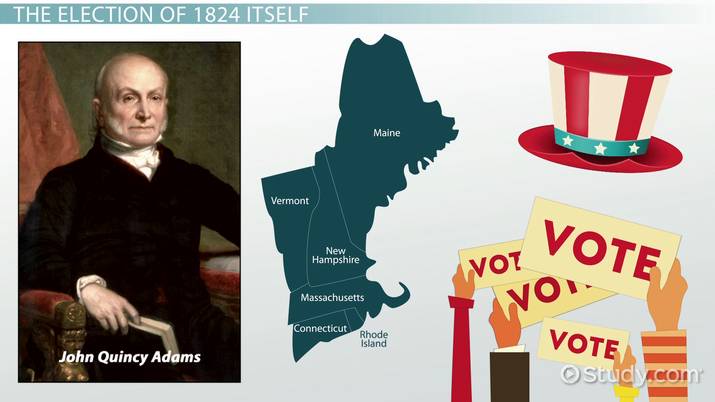 Coming up next: Presidential Election of 1828: Issues, Candidates & Significance

Candidates of the 1824 Election

The 1824 election was decided between several major candidates. The first was John Quincy Adams, the Secretary of State and the son of John Adams, the second president of the United States. Adams was a famed diplomat, a brilliant thinker, and a well respected leader in the U.S. government. In the early years of American politics, secretaries of state held great influence, and the position was often seen as a stepping stone to the presidency. He was thus a logical choice for the presidency.

Next up was Henry Clay, the Speaker of the U.S. House of Representatives. Clay was arguably the most famous congressman of the 19th century, as he left an indelible impact on Congress during his long tenure as a congressman and a senator. A native of Kentucky, it was still early in his career when he ran for president in 1824.

Another famous American at this time was Andrew Jackson. His primary claim to fame was having led American forces to victory at the Battle of New Orleans in early 1815, a major victory that helped to secure American victory in the War of 1812. After the war, Jackson was the military governor of Florida. He had also served as a congressman and a senator before the war, and he owned and ran a large plantation in Tennessee.

The fourth major candidate for the presidency was John Calhoun, the Secretary of War at the time. Calhoun was from South Carolina, and was a strong nationalist in his early political career. Over time, Calhoun became a much stronger advocate of states' rights.

Another major candidate was Secretary of the Treasury William H. Crawford. Crawford was afflicted with a stroke in 1824, and was unable to contribute much to his presidential campaign that year. However, it is worth remembering, in the early 1800s, presidential candidates did not openly campaign for office. They remained on the sidelines while their friends and supporters did most of the work of campaigning.

The Election of the 1824 Itself

With Clay, Calhoun, Crawford, and Jackson all coming from slave-holding states in the South (Kentucky, South Carolina, Georgia, and Tennessee, respectively), Calhoun decided to drop out of the running for president during the campaign. Thus, the fight for support in the South was between Clay, Crawford, and Jackson. While Calhoun didn't run for president in the end, he did receive enough electoral votes to become the Vice President in 1824. The presidency itself, however, was decided in a much different manner.

Ultimately, Andrew Jackson, seen as a man of the people, won a plurality of the popular and electoral vote, sweeping large parts of the South and West. Yet, Adams drew significant support from New England. With several candidates, no one man won the requisite Electoral College majority, and the election went to the House of Representatives, as dictated by the Constitution. This led to a controversy and struggle that changed the future of American politics forever.

The contest in the U.S. House was limited to the top three candidates according to the results. These were Jackson, Adams, and Crawford. Henry Clay, the Speaker of the House, was fourth and thus not considered, much to his dismay.

Jackson had won a plurality of the popular and electoral votes and was thus the frontrunner. However, Jackson was not a fan of internal improvements bills that were a staple of Henry Clay's American System. This set of policies called for Federal government support of infrastructure projects such as roads and canals, assisting the growing country by building an economic framework for success. Jackson's opposition meant that Henry Clay did not support his candidacy or his politics.

Clay therefore supported Adams, who was much closer to his own positions on such matters. Adams was elected president by the U.S. House, despite having been second to Jackson in the popular and electoral votes in the general election.

The Adams victory did much to affect the future of American politics. Jackson was infuriated that he lost. He accused Henry Clay and John Quincy Adams of reaching a corrupt bargain. Soon after Adams's election, Clay was made Secretary of State, a move which appeared to have been a thank you for Clay's support during the election in the U.S. House.

Jackson vowed to run again in 1828. He and his supporters made winning that election a primary goal for the next several years. Jackson's anger and passion won the day. He was elected in 1828, reelected in 1832, and his presidency ended the era of one-party politics.

In response to Jackson, the Republican-Democrat Party evolved into the Democratic Party, and the Whig Party was born as a contrast to Jackson's use of executive power and authority. The Adams-Jackson and Clay-Jackson rivalries would shape American politics until the outset of the Civil War. The two-party system that they recreated has been in existence in one form or another ever since.

Let's review. The election of 1824 was a very contentious and even confusing election in American history. It came on the heels of the Era of Good Feelings, a period of time that featured a lack of partisan bickering. The election was between five candidates:

Calhoun dropped out early due to health concerns, and when the election commenced, a three-way split between Jackson (who won the popular vote), Adams, and Crawford. Clay came in fourth and ultimately threw his support behind Adams, in what was called a 'corrupt bargain' by Jackson, due to Jackson's dislike of Henry Clay's American System, which called for Federal government support of infrastructure projects such as roads and canals, assisting the growing country by building an economic framework for success.

Eventually, Adams was voted into office by the House of Representatives, leading to Jackson vowing to run again in 1828. In response to Jackson, the Democratic-Republican party evolved into the Democratic Party, and the Whig Party was born as a contrast to Jackson's use of executive power and authority.