Despite allegations of corruption and scandal that swirled around Ulysses S. Grant at the end of his second term, he was eager to run again in 1876. However, scandal and the two-term tradition stopped him from moving forward with his desires. James G. Blaine of Maine emerged as the frontrunner of Grant's Republican Party. But, like Grant, and many of the other Republicans associated with his administration, scandal tainted Blaine as well. At the Republican convention that year, the party put its hopes in the Ohio native Rutherford B. Hayes. Three times elected as the governor of Ohio, he had made a name for himself as a civil service reformer. His greatest strength, however, was that he did not offend the radicals or the reformers.

In St. Louis, at the Democratic convention, there was little debate about who would be put forward as candidate for president. Samuel Tilden, the millionaire, corporate lawyer, and reform-minded governor of New York, would be the choice. Tilden gained notoriety when he went after the infamous ring of Boss Tweed that controlled New York City politics through bribes and graft.

The campaign of 1876 generated no burning issues. The main issues of the day centered around how to reconstruct and administer the South as well as reforming civil service work. Both Hayes and Tilden favored conservative rule in the American South and both favored civil service reform.

With little of substance to focus on, each camp turned to mudslinging. The Democrats aired the Republicans' dirty laundry, reminding voters of the scandals and corruption present during the Grant years. In response, the Republicans linked the Democratic Party with secession and with the outrages committed against black and white Republicans in the South. Some Republican leaders went so far as to comment that every man who tried to rip the country apart was a Democrat and reminded the public that Abraham Lincoln's assassin was a Democrat. 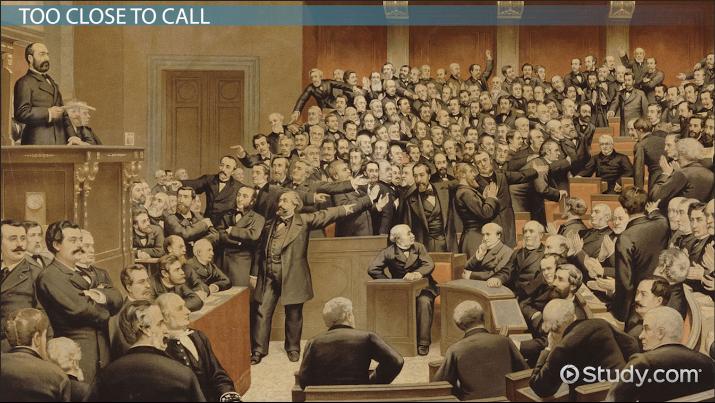 Too Close to Call

Early election returns showed Tilden would score a victory. In most of the country, Tilden had an edge of just over a quarter million in the popular vote and 184 electoral votes by most estimates, just one shy of a majority. In some southern states, the outcome was uncertain. Fraud and intimidation on both sides made accurate returns doubtful. In fact, three southern states - Louisiana, Florida, and South Carolina - sent in disputed returns. The Constitution offered no guidance on how to deal with this situation. Even if the procedure of the day empowered Congress to sort out the disputed votes, the Democratic House and the Republican Senate wouldn't have been able to reach a final agreement.

Finally, on January 29, 1877, the two houses decided to set up a special Electoral Commission to investigate what had happened. The Commission had fifteen members, five each from the House and Senate, and five from the Supreme Court. The decision on each state went by a vote of 8 to 7, along party lines, in favor of Hayes. The Democrats threatened to filibuster, or hold up the decision, but in the end, the House voted to accept the Commission report and declare Hayes the winner. It would be an electoral vote of 185 to 184.

Critical to the outcome was the fact that several southern Democrats had defected and made deals with Republicans. In February of 1877, prominent Ohio Republicans and powerful southern Democrats struck a bargain. This deal would become known in history as the Compromise of 1877. The Republicans promised that if elected, Hayes would remove federal troops from Louisiana and South Carolina. Federal troops had remained in the South after the war, administering the law, a push by Grant and the Radical Republicans. This 'compromise' would lead to the collapse of Republican governments in those states.

In return, the Democrats promised to withdraw their opposition to Hayes, to accept in good faith the Reconstruction amendments to the Constitution, and stop partisan attacks against Republicans in the South. With this agreement in hand, southern Democrats could justify giving up on Tilden, making the election of 1876 one of the closest in all of American history.

The Presidential election of 1876 pitted Republican Rutherford B. Hayes against Democrat Samuel Tilden. Because the candidates differed little in their support of conservative values and civil service reform, the opposing camps sought to tar the other party's reputation.

Although early results showed Tilden winning, several southern states sent in disputed returns. Because the Constitution provided no specific guidance on how to proceed and because the House was dominated by Democrats and the Senate by Republicans, an Electoral Commission with five members from each house of Congress and five members of the Supreme Court was established.

In February of the following year, Ohio Republicans and southern Democrats agreed to the Compromise of 1877: if elected, Hayes would remove federal troops from Louisiana and South Carolina, while the Democrats would accept the Reconstruction amendments to the Constitution, withdraw their opposition to Hayes, and stop partisan attacks against southern Republicans. Thus, when the Electoral Commission cast its votes, the decision on each disputed state went on an 8 to 7 vote in Hayes' favor, making the final electoral vote count 185 to 184 for Hayes.

Major Events in Election of 1876

When this lesson ends, students will be ready to:

The Presidential Election of 1896

The Omaha Platform of 1892: Definition & Goals