View bio
As leader of the executive branch of the U.S. government, the president holds many powers that are unique to the presidency. Learn more about the different presidential powers, such as treaty power, appointment power, legislative powers, pardon powers, and inherent powers. Updated: 10/04/2021
Create an account

We think of our United States president as the 'boss' or CEO of our country. The president can do anything he or she wants, right? Well, not so fast. While the United States Constitution grants many different powers to Congress, it grants only a few specific powers to our president. Let's look at the major types of presidential powers.

First, the president has treaty power. This power comes from the Constitution's Treaty Clause and is the president's authority to negotiate international treaties with other nations. An international treaty is an agreement made between two countries and enforceable as a part of international law. For example, the North American Free Trade Agreement, or NAFTA, is a treaty between the U.S., Canada, and Mexico. It was negotiated by President Bill Clinton and went into effect in early 1994. This treaty eliminated almost all trade barriers between the three countries and created the world's largest free trade zone.

Under the Constitution's Article II, the president has the exclusive power to deal with other countries in this manner. However, our Congress must ratify the president's agreement before the treaty can take effect. This means that the treaty must be approved by a two-thirds vote of the Senate. 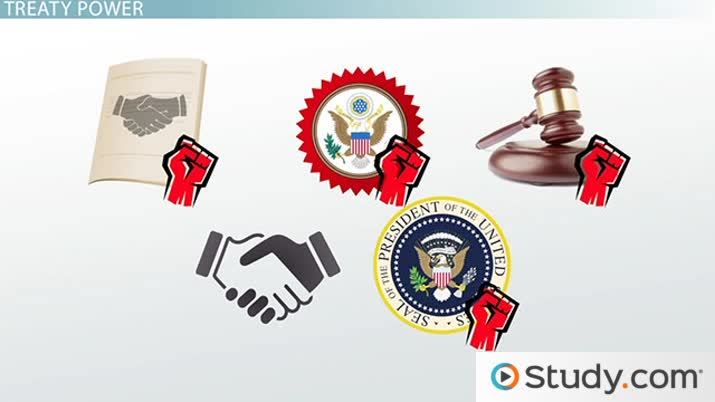 Coming up next: The Presidential Image: Contributing Factors & Importance

Next, let's take a look at the president's appointment power. This power comes from the Constitution's Appointment Clause and is the president's authority to select people to serve in various government roles. Our president has the authority to select all presidential cabinet positions, all Supreme Court justices, all federal judges, all U.S. ambassadors, and several other government roles. However, the president's appointment power is not unchecked. Most appointments, like those for federal judgeships and Supreme Court justices, require majority approval of the Senate. Others, like ambassadorships, must pass approval by a congressional committee.

Sometimes the Senate rejects a president's choice. For example, President Ronald Reagan nominated Robert Bork to the U.S. Supreme Court in 1987. However, the Senate didn't confirm Bork. Media coverage painted Bork as an extreme conservative and Bork came off as uncaring during his confirmation hearings. Reagan subsequently nominated the more moderate Anthony Kennedy, who was unanimously confirmed.

Let's examine the president's power to issue executive pardons. This is an action by the U.S. president that lessens or sets aside the punishment for a federal crime. In effect, the Constitution allows the president to undo the final decision of a federal court. Article II gives the president almost unlimited power to grant pardons. All pardons serve to grant clemency, or forgiveness, to a party.

Pardons also serve to restore a party's civil rights in cases where the party lost rights as part of his or her criminal punishment. For example, a pardoned person can be released from prison. A president can even issue a pardon before prosecution for a particular crime has occurred. This prevents further prosecution for that crime. For example, President Gerald Ford famously pardoned Richard Nixon for all crimes he committed or took part in concerning the Watergate scandal. This pardon prevented the federal court system from prosecuting Nixon for those matters.

So far, we've discussed presidential powers that come directly from the Constitution. There are other presidential powers that are inferred from the Constitution. These are known as inherent powers. Our president's inherent powers include the power to sign executive agreements with other countries in order to facilitate foreign policy; the power to invoke executive privilege in order to keep sensitive information, such as military strategy, from Congress and the courts; the power to send military troops into combat without first consulting Congress, though Congress must approve their continued deployment; the power to respond to a federal crisis without first consulting Congress such as President George W. Bush did by implementing the government's emergency response plan and authorizing the shoot-down of hostile aircraft during the 9/11 terrorist attacks.

Review this lesson so that you may:

Example: All but inherent powers are granted by the Constitution.

In approximately one to two paragraphs, write an essay that describes the significance of the president's treaty powers.

Example: The power to negotiate international treaties can help a president form political or economic alliances with other world leaders.

Write an essay of about three to four paragraphs that explains the president's legislative powers. Be sure to distinguish these powers from those of Congress. Also be sure to explain what a veto does, as well as how the president delivers his or her legislative agenda.

Example: The president announces his or her legislative agenda at the State of the Union address.

Write an essay of at least two to three paragraphs that explains executive pardons and provides examples of situations in which it might be necessary for a president to issue a pardon.

Example: The president can issue a pardon to release someone from prison.

Make a list of at least four positions for which the president has the power to make appointments. Try to recall as many as you can from memory.

The Presidency, the Cabinet & the Bureaucracy

Law and Order: Procedural Rights of the Accused