From sale prices to trip distances, many real life problems can be solved using linear equations. In this lesson, we'll practice translating word problems into linear equations, then solving the problems.
Create an account

A train leaves Chicago at 7 a.m., traveling at 70 mph to New York, which is 800 miles away. Another train leaves New York at the same time, traveling on a parallel track to Chicago at 85 mph. When will they meet? The question is: why do we care so much about trains?

Well, I like trains, but I still feel a little nervous when I read a math problem that starts with a train. If I'm going to have to translate a real world scenario to an algebraic equation, can't it be something I might actually encounter in my life? I mean, I've ridden trains between Chicago and New York, but I've never plotted when my train will pass another.

In this lesson, we'll not only practice solving problems that can be translated into linear equations, we'll also focus on problems you may encounter in your life - problems not involving trains passing each other. 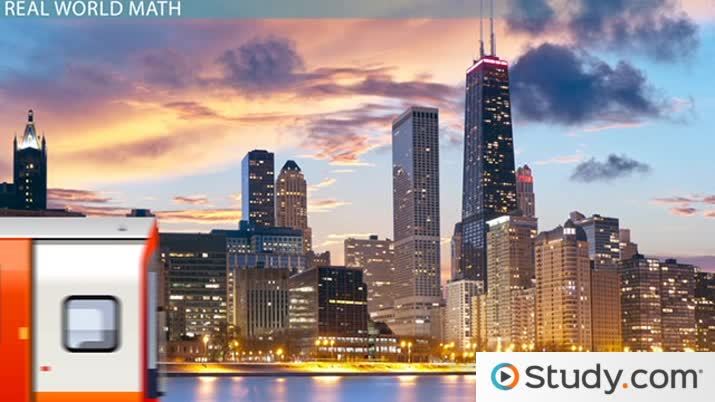 Coming up next: Solving Linear Equations with Literal Coefficients

As a reminder, a linear equation is just an algebraic expression that represents a line. These equations typically have one variable and look like 3x = 9 or y + 4 = 10. In these equations, we're trying to figure out the variable, which involves getting it alone on one side of the equals sign.

There are simple problems that involve linear equations. For example, the sum of 35 and a number is 72. What is the number?

Let's take that knowledge and look at some real life situations. Let's start with money. We all like money, right?

Let's say you're a little short on cash and need a loan. Your cousin agrees to loan you money, and you agree that you'll repay him in full plus 4% interest. We're going to ignore the questionable judgment he displays in loaning money to family. If he loans you $500, how much interest will you need to pay?

You decide that you want to be better about saving money. Your cell phone company is promoting a text message plan that costs $10 each month plus five cents per text. You currently pay $20 each month for an unlimited plan, but you want to save a few dollars. If you want to try the new plan and spend only $15 each month, how many texts can you send?

But, then you get a new job, and suddenly you have some extra cash. You decide that you want to save up for new bike. You find one you like that costs $400. If you can save $35 each week, how many weeks will it take you to get the bike?

After you get the bike, you decide to have some fun. Let's say you and two friends go bowling. At the end of the night, your bill is $42. If you played 3 games and paid $3 each for shoes, how much did you pay per game?

Ok, before we go, why don't we try that train problem, you know, just to show that we can. How did it go? A train leaves Chicago at 7 a.m. traveling to New York, which is 800 miles away, at 75 mph. Another train leaves New York at the same time, traveling on a parallel track to Chicago at 85 mph. We want to know when they'll meet.

Hopefully, the passengers will have finished their linear equation word problems and look up in time to wave. I mean, two trains passing each other at 75 and 80 miles per hour won't see each other very long.

In summary, we learned how to translate word problems in linear equations, or algebraic expressions that represent lines. We looked at simple examples, where the problem describes a number in terms of details about it, like the sum of twice a number and 52 is 174.

Then, we looked at problems that involve real-life scenarios, from loaning money to bowling. We focused on defining the variable, or the unknown quantity, in terms of what is known, then solving for the variable.

You'll be able to translate word problems into linear equations and solve those equations after watching this video lesson.

How to Write a Linear Equation

Constructing an Angle Bisector in Geometry

How to Solve Multi-Step Algebra Equations in Word Problems

What is a Function? - Applying the Vertical Line Test

The Commutative and Associative Properties and Algebraic Expressions

How to Solve Multi-Step Equations with Fractions & Decimals

Translating an Addition Statement into an Algebraic Expression