Water. It's a vital component of our bodies, making up about 70% of each cell's volume. Water homeostasis is key to survival - and our body has evolved complex biochemical systems to keep the right amount of water in our cells. One of these includes a hormone called antidiuretic hormone, or ADH. ADH's job is to act on the kidneys to promote water reabsorption. In this lesson, we'll compare and contrast diabetes insipidus, or DI, in which there is too little ADH, and syndrome of inappropriate antidiuretic hormone secretion , or SIADH, in which there is too much ADH.

Let's start by reviewing a little about ADH. ADH is also called arginine vasopressin, AVP, or just vasopressin. Made in the pituitary gland, ADH has a many functions, but for this lesson, we'll focus on its main place of action: the kidneys. ADH binds to receptors on the kidneys' nephrons, stimulating them to reabsorb water. The volume of urine made drops, and the amount of solute (salts and other solids) in it increases. This measure of amount of solute per kilogram of solvent is called osmolality. We'll see how DI and SIADH affect osmolality of both blood and urine later in the lesson. 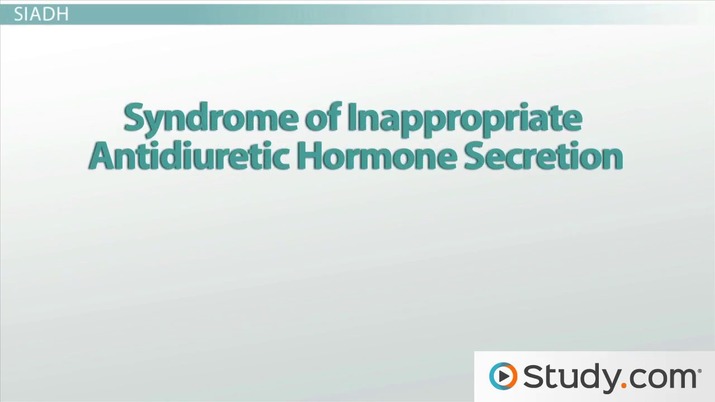 Try it now
Back
Coming up next: Simmonds' Disease and Sheehan's Syndrome

In diabetes insipidus, or DI, the body produces too little anti-diuretic hormone. Since diuresis means the production of urine, a shortage of ADH, which works against diuresis, results in polyuria, the production of a lot of urine. And indeed, polyuria is the primary symptom of diabetes insipidus. It's also because of polyuria that diabetes insipidus shares part of its name with diabetes mellitus, since both have polyuria as a symptom. However, these conditions are not related, because the etiologies behind them are very different. In diabetes mellitus, polyuria is caused by hyperglycemia, too much glucose in the blood. In DI, polyuria is not caused by hyperglycemia. Instead, it stems from something else, depending on how the disorder is generated. Notice that 3 of 4 of these terms have the root 'gen'.

Dangers of untreated diabetes insipidus are those caused by dehydration, especially

Diagnosis is designed to not only distinguish DI from diabetes mellitus, but also to determine what kind of DI is present. Common tests include urinalysis to determine the composition and dilution of urine, MRI to check for pituitary gland problems, and a water deprivation test. In this test, patients are deprived of fluids for a period of time to pinpoint how and why ADH isn't functioning properly.

Treatment for DI depends on etiology. For neurogenic DI, synthetic ADH (or, desmopressin) is usually prescribed to make up for ADH not being manufactured or released by the body. Low doses of desmopressin are also used in cases of gestational DI. In cases of nephrogenic DI, where the problem is with the kidneys not being able to respond to either natural or synthetic ADH, desmopressin would not be effective. Therefore, treatment usually consists of a low-salt, high-fluid diet, with additional medications (antidiuretics) to prevent too much water loss. There is no satisfactory treatment for dipsogenic DI.

In syndrome of inappropriate antidiuretic hormone secretion, sometimes called Schwartz-Bartter syndrome or SIADH, the body secretes too much ADH, and doesn't release as much water as it should. The main symptom of SIADH is hyponatremia, a low (hypo) concentration of sodium. Remember: Na is the chemical symbol for sodium, and '-emia' refers to blood. Notice this is the direct opposite of one of the symptoms of DI. Another symptom of SIADH is small amounts of highly concentrated urine that has a high osmolality, as opposed to the dilute urine produced in DI.

Most cases of SIADH stem from over-production of ADH from the pituitary due to tumors, injury, or degeneration of the nervous system. In other cases, the use of drugs such as MAO inhibitors or tricyclic antidepressants stimulate excess ADH secretion. Pulmonary disorders such as pneumonia and lung cancer can also cause SIADH.

With all of the extra fluid retained by the body, it wouldn't be unreasonable to expect edema, or tissue swelling, to be another primary symptom of SIADH. This is not true because of natriuresis, excretion of sodium in the urine. (Notice the same roots, here - 'Na' for sodium, and 'uri' for 'urine'.) In an effort to keep body fluid down, the kidneys excrete sodium ions into the urine. Of course, this makes hyponatremia even worse.

Symptoms presented during SIADH are caused by hyponatremia, and, again, occur without edema. They do include:

Because the symptoms of SIADH are pretty generic, diagnosis is obtained by exclusion, that is, by eliminating other disorders. Many other conditions (congestive heart failure, to name just one) result in elevated levels of ADH. The key thing to look for in SIADH is a serum concentration of sodium less than 135 mmol/L, as normal values range from 135 - 145 mmol/L. This low serum concentration needs to be associated with a urine osmolality of <100 mOsm/kg. This value is important because in other causes of hyponatremia, the body inactivates ADH, causing very dilute urine.

Treatment of SIADH is determining and dealing with the reason for too much ADH secretion, (for example, surgery for a pituitary gland tumor.) Other treatments attempt to carefully return water balance, through restricting fluid intake, and slow administration of saline. In some cases, ADH inhibitors or antagonists, are used.

In closing, let's compare and contrast diabetes insipidus and syndrome of inappropriate antidiuretic secretion. In both, ADH, or antidiuretic hormone, plays a key role. ADH's job is to maintain fluid balance by stimulating the kidneys to absorb water.

In diabetes insipidus, the body makes or is able to use too little ADH. Not to be confused with diabetes mellitus, in which symptoms are caused by hyperglycemia, DI can be divided into categories based on etiology, including nephrogenic, in which the kidneys don't respond to ADH, and neurogenic, in which the pathway to making ADH is faulty. Polyuria, increased urine output, is the primary symptom of diabetes insipidus. Other symptoms include extreme thirst, hypotension, and heart arrhythmias and palpitations due to hypernatremia, a high concentration of sodium in the blood. Treatment of DI depends on the condition's etiology, and may include synthetic ADH, or simply diet and fluid intake modifications.

In SIADH, the body makes too much ADH. In this disorder, the body does not release as much water as it should. A main symptom of SIADH is hyponatremia, a low concentration of salt in the blood. However, unlike in other more common conditions, hyponatremia does not occur with edema. Symptoms presented during SIADH are caused by hyponatremia, and include: nausea and vomiting, altered mental state, such as confusion, or other neurological problems, such as seizure and muscle ache or involuntary movement. Diagnosis of SIADH is formed by exclusion of other conditions. Treatment of SIADH includes addressing the underlying cause of excess ADH secretion, and carefully restoring fluid and sodium balance.