Ron has taught history and educational technologies at the high school and college level and has a doctorate in American History.

The Proclamation Line of 1763

We've all seen 'No Trespassing' signs posted in various locations. These signs can be found everywhere, and the message is always clear—stay out! Now, imagine that you spend years struggling at work to save enough money to finally buy your own property and, to your horror and disbelief, someone has placed a dreaded 'No Trespassing' signs all over the property of your dreams. The bank that owns the land has decided not to sell at this time, dashing your hopes and aspirations.

Now, take the above scenario, and place it in the year 1763. For decades, British colonists living in places like Massachusetts, New York, Pennsylvania, and Virginia have had their eyes on some beautiful property located on the western side of the Appalachian Mountains. The area was fertile and unspoiled and perfect for setting and establishing farms and homesteads. However, in 1763, the British government decided to place figurative 'No Trespassing' signs on the border of this property, forbidding these colonists from expanding across the Appalachians Mountains. This 'No Trespassing' sign was known as the Proclamation Line of 1763. Issued by King George III, the proclamation prohibited settlers from crossing west over the Appalachian Mountains in order to prevent further conflicts between settlers and Native Americans. 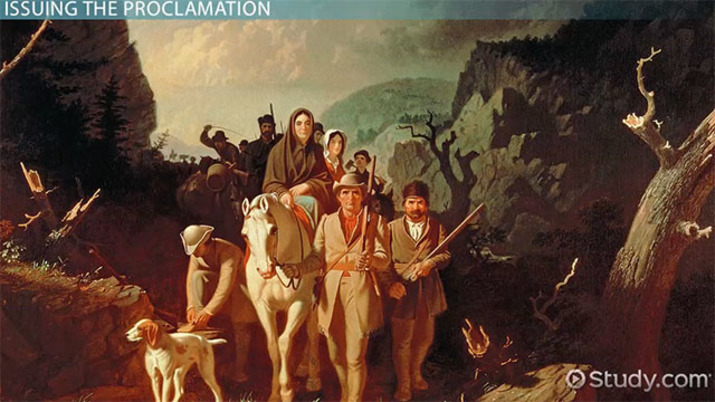 The origins of the proclamation begin in 1756, with the French and Indian War (also known as the Seven Years War). This conflict pitted England against France for control over North America. Before the war, England controlled the eastern seaboard of the present day United States and parts of upper Canada, while France controlled most of present day Canada and most of the land between the Appalachian Mountains and the Mississippi River. Both countries coveted the Ohio River Valley, which became the contested border between the two expanding empires. Interestingly, the war began when the governor of Virginia sent a young George Washington into the Ohio River Valley to assess the French presence there and demand that they leave.

Virginians were especially interested in the Ohio River Valley as an area to expand settlement. This motivation was especially important when the proclamation line was put into place after the war. The war was extremely costly in both lives and money as it ravaged on for almost ten years. Many New Englanders contributed young men to the war effort and saw many of those young pay the ultimate sacrifice for their loyalty to the crown.

The Treaty of Paris and Pontiac's Rebellion

The Treaty of Paris (1763) officially ended the struggle, giving most of Canada and all land east of the Mississippi River to the British. Native Americans, who had been loyal to the French, felt especially dismayed by the treaty. No native delegation was permitted at the negotiations, and the French agreed to transfer their holdings to the British without consulting their native allies. Many tribes felt betrayed, since they still believed the Ohio River Valley to be under their control. The Ottawa tribe, under the leadership of Chief Pontiac, mounted a rebellion in 1763, against the British at Detroit. This attack encouraged other tribes in the Great Lakes to also rebel, leading to a larger conflict known as Pontiac's Rebellion. Even though the British put down this rebellion, King George III felt uneasy about the turbulent circumstance in this area.

To ease tensions and limit future costs associated with committing military forces to suppress native rebellion and protect colonial settlement, King George III issued the Proclamation Line of 1763. Britain already had a large debt following the French and Indian War and could not afford to take on more financial burdens. Settlers were forbidden 'from making any Purchases or Settlements whatsoever, or taking Possession of any of the Lands' within the area to the west of the Appalachian Mountains. Further, any settlers who already purchased lands from the natives in this area had to, 'remove themselves from such Settlements.'

This proclamation began a dramatic transformation in the relationship between Britain and her North American colonies. Most colonists reacted negatively to the Proclamation Line of 1763, feeling that the King had forgotten their contributions to the French and Indian War. Many considered the British victory over the French as a colonial victory as well. Colonists had contributed supplies and manpower toward that victory. Therefore, they deserved to reap the benefits of that victory by establishing settlements across the Appalachian Mountains.

It is important to remember that Virginia believed that Ohio was really an extension of its original land claims. The French and Indian War really began because of Virginia's attempts to remove French presence from the Ohio River Valley. Also, Massachusetts provided most of the colonial soldiers during the French and Indian War. These two colonies, Virginia and Massachusetts, protested the most against the proclamation. Over the next ten years following the proclamation line, these two colonies would also become the most vocal advocates for independence. While the road to the American Revolution was long and winding, it was, nevertheless, a road that began with the Proclamation Line of 1763.

Let's review. After the ravages of The French and Indian War and Pontiac's Rebellion, King George III felt uneasy about the turbulent circumstances in this area. His response to the turmoil was to issue the Proclamation Line of 1763 which prohibited settlers from crossing west over the Appalachian Mountains in order to prevent further conflicts between settlers and Native Americans. This proclamation began a dramatic transformation in the relationship between Britain and her North American colonies. Most colonists reacted negatively to the Proclamation Line of 1763, feeling that the king had forgotten their contributions to the French and Indian War. They felt they deserved to reap the benefits of that victory by establishing settlements across the Appalachian Mountains.

What Were The Intolerable Acts of 1774? | Summary & Significance

What is the Proclamation of 1763? - Lesson for Kids