View bio
Living organisms are defined as being either a prokaryote or a eukaryote. Learn how to compare and contrast examples of prokaryotes, which are one-cell organisms without a nucleus, with eukaryotes, which include humans, animals, and most anything living thing visible to the naked eye. Updated: 09/30/2021
Create an account

Have you or anyone you know ever had strep throat before? If so, then you, a eukaryote, have become acquainted with a prokaryote. Now, you are probably asking several questions at this point. What in the world is a eukaryote? What is a prokaryote? How am I a eukaryote? Which prokaryote did I get to know? Well, let's get you the answers to your questions. 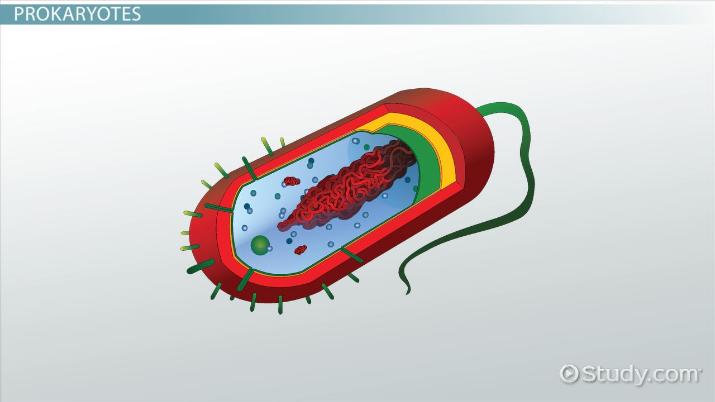 Coming up next: Eukaryotic and Prokaryotic Cells: Similarities and Differences

Prokaryotes are 1-celled organisms that do not have a nucleus or any other membrane-bound organelles inside them. The name prokaryote itself actually lets you know that there isn't a nucleus, since pro means before and karyo refers to nucleus.

Prokaryotes are filled with cytoplasm and contain very few and basic internal structures. The genetic information is carried on circular pieces of DNA. There may be only one piece of DNA or many pieces of DNA. The only organelles, or internal structures that exist in prokaryotes are ribosomes, which make proteins needed by the organism. Prokaryotes include Archaea, bacteria and cyanobacteria. That answers the question about what a prokaryote is.

So, now let's address the question about which prokaryote you became familiar with during that case of strep throat. Strep throat is caused by a Group A strep bacterium called streptococcus pyogenes. 'S. pyogenes are gram-positive and do not move on their own. This bacterium causes strep throat and can also cause impetigo, scarlet fever and cellulitis - and a few other diseases in our bodies.

While this may not have been such a happy meeting with this prokaryote, these bacteria are able to live in our bodies and not cause any disease at all. As a matter of fact, there are many bacteria that are helpful in our bodies. Let's discuss one now.

It would be very difficult to break down the foods we eat without the help of bacteria. One bacterium that helps to break down food is lactobacillus acidophilus. L. acidophilus reside naturally in our gastrointestinal tract. These bacteria like to grow in very acidic areas and convert the sugar lactose into lactic acid. This action is what allows us to enjoy dairy products, such as that melted cheese on a slice of pizza. Yum!

Cyanobacteria are unique in many ways. These are considered to be the oldest living organisms on the Earth and are the most abundant of the prokaryotes. They are able to make their own food through photosynthesis, and through that process, they have released a lot of the oxygen we breathe. Cyanobacteria live in water and are often found living together in clumps known as colonies. Cyanobacteria are often used in fertilizer to help with the growth of different crops. So, while there are some prokaryotes that can be harmful, there are many that are very useful and necessary for us to survive.

Finally, when talking about prokaryotes, we can't forget about the domain archaea. Although they were once classified as bacteria, these single-celled microorganisms make up their own domain. While many species of archaea are similar in size and shape to bacteria, they possess a different genetic structure and biochemistry. They were first thought of as extremophiles because they were found in harsh environments, such as volcanic vents and the Dead Sea. We know today, though, that archaea can inhabit a wide range of environments and are particularly abundant in the oceans.

Eukaryotes developed many years after prokaryotes and are substantially more complex. Their name also tells you about the nucleus, since eu- means 'true,' and we know already that karyo- means 'nucleus.'

These organisms are either single-celled or multicellular. They contain a membrane-bound nucleus as well as membrane-bound organelles such as mitochondria, endoplasmic reticulum and the Golgi complex. The nucleus contains DNA, which is organized into linear chromosomes. Eukaryotes depend on the different organelles in order to carry out the various functions of the cell in order to sustain life.

We already established early on that you are a eukaryote. All humans, homo sapiens, are eukaryotes, and you likely know quite a bit about yourself and other people, so let's look at some other examples of eukaryotes. All plants, animals and fungi fall under the category of eukaryote. Any living organism that you can see with your naked eye is a eukaryote.

One specific example of a eukaryote is the plant Zantedeschia aethiopica, or as most people call it: calla lily.

Another specific example of a eukaryote is the yeast saccharomyces cerevisiae. This yeast can be used to bake bread, ferment wine or make cheese and beer.

Yeasts are classified as unicellular fungi that break down organic material to get the food they need to grow. Individual yeast cells are oval in shape and can only be seen with a microscope.

Now that we've answered all of the questions from earlier, let's put it all together: prokaryotes are simple, non-nucleated unicellular organisms. Prokaryotes include archaea, bacteria and cyanobacteria. The cyanobacteria are able to produce their own food through the process of photosynthesis, live in water and provide large amounts of oxygen into the air. There are numerous species of bacteria that exist in our world. Some reside in our bodies to help us, some cause diseases in us and some have nothing to do with us at all. Archaea are single-celled microorganisms that are not bacteria.

In contrast, eukaryotes are either single-celled or multicellular and contain a membrane-bound nucleus and membrane-bound organelles, which help them carry out life-sustaining functions. All plants, animals and fungi are eukaryotes.

In this activity, students will be creating a colorful and attractive poster that utilizes a Venn diagram. A Venn diagram is a chart used to compare the similarities and differences between two ideas. To create a Venn diagram, students draw two circles that overlap, creating an area to list the similarities between the two ideas. For example, a student might write that prokaryotes don't have a nucleus, but eukaryotes do. In the shared column they might write that both are cells, because this is a shared trait between prokaryotes and eukaryotes. If students are having trouble coming up with examples of prokaryotes and eukaryotes they can use the internet for additional research.

The Reproduction System of Platyhelminthes