Different objects come in different shapes that help achieve their purpose. Learn about the properties of different shapes, including rectangles, squares, and rhombuses. Updated: 08/26/2021
Create an account

Let's talk about shapes. There are all kinds of shapes, and they serve all kinds of purposes. If the wheels on your bike were triangles instead of circles, it would be really hard to pedal anywhere. And, if bowling balls were cubes instead of spheres, the game would be very different.

Here, we're going to focus on a few very important shapes: rectangles, squares and rhombuses. All of them are quadrilaterals. That just means they all have four sides. Remember that 'quad' means 'four.' That means no pentagons or octagons will be discussed here. Sorry, fans of Department of Defense headquarters or, um, stop signs. But, even though they all have four sides, they all have their own special properties that make them unique. 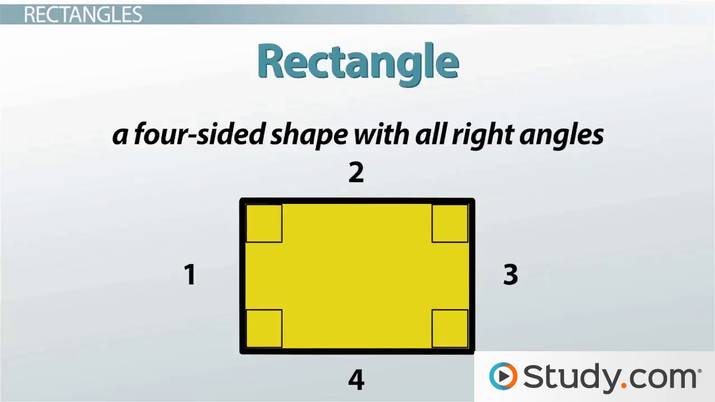 Coming up next: Properties of Shapes: Triangles

Let's start with rectangles. A rectangle is a four-sided shape with all right angles. If you want to know if a shape is a rectangle, you just have two tests. Is it four-sided? And, are all the angles 90 degrees? If both answers are yes, then you're looking at a rectangle.

Rectangles are everywhere. Think about your average room. What's a rectangle in it? Doors, tables, windows, posters on the walls - they're all four-sided shapes with all right angles. Even the screen you're looking at right now is probably a rectangle.

The fun thing about rectangles is that each pair of opposite sides can be a totally different length than the other pair. You can have a super skinny rectangle like the skyscraper above or a very even one like the old album cover below.

That old album cover fits both the definition of a rectangle and the definition of our next shape, the square. Squares are a very special subset of rectangles. A square is a four-sided shape with all right angles and sides of equal length.

Does that definition look familiar? Here are the steps to define a square: Is it four-sided? Are all the angles 90 degrees? If yes, then you have a rectangle. If all the sides are the same length, then it's not only a rectangle, it's also a square. That means that all squares are rectangles. But not all rectangles are squares, since a rectangle's pairs of sides can have different lengths.

Just like rectangles, squares are everywhere. In addition to the album cover, think about the spaces on a chessboard, stamps, floor tiles and even a snack of crackers and cheese. Because each side of a square has the same length, you don't need to be given much information to solve most problems.

Then there is the rhombus. A rhombus is a little different from a square or rectangle. Here are the questions to ask if you think you're dealing with a rhombus: Is it four-sided? Are all the sides equal in length? If both answers are yes, then what you have is a rhombus.

Did you notice what was missing? Right angles. A rhombus doesn't need to have right angles. It can, but that's the big difference with a rhombus. I like to think of it like this: The word 'rhombus' is kind of like the word 'rhino.' If a rhino charges at a square and knocks it askew, it's not a square anymore. But, it is still a rhombus! Rhinos or no, the definition of a rhombus is a four-sided shape with sides of equal length.

In summary, we looked at three different types of quadrilaterals, or four-sided shapes. First, there's the rectangle, which is a four-sided shape with all right angles. Its opposite sides are parallel and equal in length, but each pair of sides isn't necessarily the same length as the other pair.

Second, there's the square, which is a four-sided shape with all right angles and sides of equal length. A square is a type of rectangle, just one where all four sides are the same length. Finally, there's the rhombus, which is a four-sided shape with sides of equal length. The angles can be 90 degrees, but they don't need to be. So, a square is a rhombus, but not every rhombus is a square.

You'll be able to describe the properties of squares, rectangles and rhombuses after watching this video lesson.

Rhombus Shape & Properties | What is a Rhombus?

How to Format Text in PowerPoint: Bullets, Numbered Lists and Hyperlinks

Properties of Concurrent Lines in a Triangle

How to Interpret Scale Readings in Measurement

Trapezoid Shape, Types & Examples | What is a Trapezoid?

How to Create a PowerPoint Presentation Using a Template

Types of Angles: Lesson for Kids