Have you ever heard someone talking about a flat, or proportional, tax and weren't sure what the person was referring to? Find out what a proportional tax is and learn about some of the benefits it might offer.
Create an account

What Is Proportional Tax?

Have you ever heard someone complaining about the amount he or she pays in taxes? If so, did the person have any thoughts on how to change things? One simple idea that's often proposed is changing our current tax system to a proportional, or flat, tax. Some argue that a proportional tax is much less complex than our current system and a fair solution for people of all incomes.

Proportional tax is a tax strategy in which the taxing authority charges the same rate of tax from each taxpayer, regardless of how much money the taxpayer makes. This means that lower-income, middle-income, or upper-income people pay the same tax percentage. Since the tax is charged at a flat rate for everyone, a proportional tax is often referred to as a flat tax. For example, under a proportional tax, everyone might pay a 10% federal tax on their income earned, whether they made a million dollars or ten thousand dollars.

The basis of this proposal is rooted in the thought that since everybody is equal, taxes should be charged in an equal manner. The rationale is that it's unfair to charge more from anybody having a higher income. 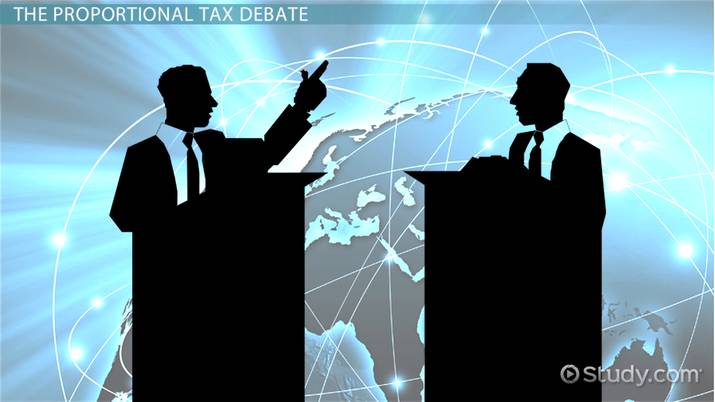 The idea of a proportional tax has been brought forward for debate in the United States on several occasions over the past few decades. The proportional tax debate is a complex one, with the obvious advantage being that no one receives special treatment; all people are taxed in exactly the same way. It's also easy to reason that this system would be much simpler and thus would result in considerable savings to all parties.

For example, the time and energy businesses and individuals spend annually in preparing tax forms would be greatly reduced. The Internal Revenue Service would also save huge amounts of money if tax returns were as simple as a postcard with the amount owed and paid. You can probably appreciate this argument if you have ever opened up the paper instructions for filing a federal income tax return or gone through hundreds of questions to file your tax return online.

Now let's look at a few examples of proportional taxes. One of the most familiar proportional taxes is the sales tax you pay when you purchase goods at your local gas station, clothing company, or chain store. All shoppers pay the same rate regardless of their income.

A tithe is another example of a proportional tax. In tithing, a religious organization or charity recommends or sets a flat percentage of your income as the amount to be contributed. This is an outdated taxation model that dated back to the time of the Old Testament.

Additionally, corporations currently pay a fixed rate on their taxable income. There are other arguments to what type of tax this most closely resembles, but in its simplest form, it is a proportional tax.

And, finally, several U.S. states impose a proportional income tax rate for individuals on their state tax returns. A few of these states are Colorado, Indiana, and Massachusetts.

Let's review. Proportional tax is a tax strategy in which the taxing authority charges the same rate of tax for each taxpayer, regardless of how much money the taxpayer makes. Sales tax, tithe, and some state income tax rates are examples of proportional taxes. Most societies, including the United States, have a progressive income tax, where lower-income individuals pay a lower fraction of their income in taxes than do higher-income individuals.

Proportional tax is a tax strategy in which the taxing authority charges the same rate of tax from each taxpayer, regardless of how much money the taxpayer makes.

Flat tax is a proportional tax.

Sales tax is a flat tax paid by all consumers for goods and services.

Tithe is a religious tax that is proportional.

After viewing this lesson, you should be able to provide examples for various types of proportional taxes.

Economic Goals for the US Economy