This lesson explains what a prosthetic group is, what it does and how it relates to cellular components. It also delves into a few examples of prosthetic groups.
Create an account

What Is a Prosthetic Group?

People without the typical number of limbs (arms and/or legs) often use prosthetics, which are attachments to the main body. What someone can do with a prosthetic varies by the type of device. For example, a person missing a leg might use a prosthetic to help him walk. A person with a prosthetic arm can give a handshake.

Cells also use prosthetics to help them accomplish tasks. Prosthetic groups are non-peptide (non-protein) compounds that mostly attach to proteins and assist them in different ways. They can be inorganic (like metals) or organic (carbon-containing) and bind tightly to their target. Prosthetic groups can bind via covalent (electron-sharing) or non-covalent bonds. 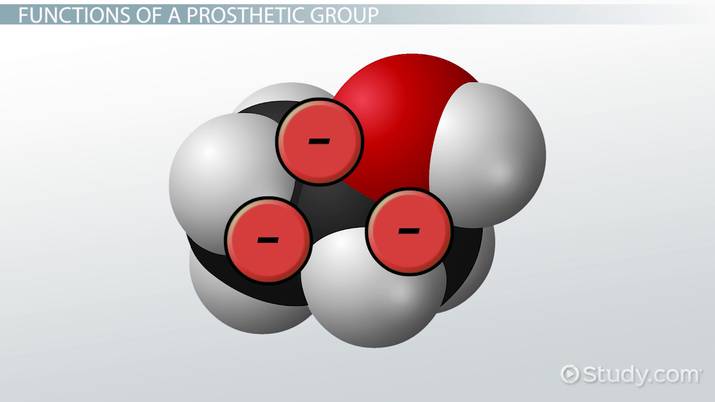 Functions of a Prosthetic Group

Just as prosthetic limbs can help people do a variety of things like walk, run, chop onions or pick up their shoes, prosthetic groups have many functions. They mainly assist proteins, though they are not limited to just helping proteins. Prosthetic groups can act as scaffolding or a tie to help proteins fold in to a 3-D structure (their conformation).

They also can help proteins bind other cellular components or act as carriers of electrons or molecules (protons (H+) and oxygen) to assist a cell in moving electrons or molecules from one place to another. By attaching to a specific group of proteins called enzymes, prosthetic groups can make enzymes active (turn them on) or increase their activity. Prosthetic groups that attach to enzymes are often called cofactors or coenzymes because they help the enzyme to function. An enzyme with a prosthetic group is a holoenzyme, while any protein with a prosthetic group is generally referred to as a holoprotein.

How big a role do these prosthetic groups play in the cellular orchestra? Prosthetic groups are important for electron transport in cellular/mitochondrial respiration; that's where the cell makes ATP (adenosine triphosphate), which is the energy that cells need to keep functioning and keep you alive. They are also involved in photosynthesis, which is an important process to keep plants alive. In addition, prosthetic groups are players in the formation of fatty acids, which are used in a variety of cellular processes, including respiration.

Ever heard of hemoglobin? It carries oxygen in your blood; without it, you wouldn't have any way to move oxygen from your lungs to the rest of your body. Since your body tissues require oxygen for respiration, without an oxygen carrier, you're, well, a goner. So, how does hemoglobin carry oxygen?

Heme is the prosthetic group responsible for binding and carrying oxygen. Not only does it carry oxygen to tissues, it also carries out what you exhale: carbon dioxide (CO2). Heme can be a part of many other proteins as well. It's found in myoglobin (what muscles use to transport and store oxygen), as well as cytochromes (which are involved in electron transport for respiration). The main element responsible for carrying electrons, oxygen, and CO2 is the iron (Fe) found in the center of all heme prosthetic groups.

Some vitamins are important for providing cells with prosthetic groups as well. Biotin is part of an enzyme that assists in making fatty acids. In particular, biotin helps change acetyl coenzyme A to malyonyl coenzyme A. Why is this important? Because malyonyl coenzyme A can be further modified and eventually used in the formation of antibiotics like erythromycin. In this case, the prosthetic group biotin is a coenzyme, assisting in enzyme activity.

Riboflavin (B2) is another vitamin used as a prosthetic group. Flavin from riboflavin makes up a key component of FMN (flavin mononucleotide) and FAD (flavin adenine dinucleotide), which play an important role in the transport of electrons during mitochondrial respiration.

One prosthetic group that's not bound to a protein is coenzyme Q (ubiquinone). Ubiquinone carries electrons and protons (H+) and can travel between mitochondrial respiratory complexes.

As you already might have guessed, like flavin, ubiquinone is a major player in mitochondrial respiration. Other prosthetic groups involved in respiration include iron sulfides and copper, which both bind to cytochrome c complexes.

Prosthetic groups are non-protein components that attach mostly to proteins and assist the protein in various ways. They might act as molecular (H+ or O) and electron carriers, assist the protein in making or keeping its conformation (3-D structure), help protein to bind other molecules, or act as an activator (cofactor or coenzyme) for enzymatic proteins.

Holoenzyme Functions & Examples | What is Holoenzyme?