Proteins can be classified according to their structure as either primary, secondary, tertiary, or quaternary. Explore the classifications of proteins by structure, and discover how structures differ from one another. Updated: 08/14/2021
Create an account

In this lesson, we'll be learning about primary, secondary, tertiary and quaternary structure of proteins, but first, let's take a little detour and talk about writing.

What does writing have to do with biochemistry? Well, let's think about this for a second.

So let's say you need to write a story and your story will be made of several paragraphs. Now when you go to write a paragraph, you don't just think of random letters and have them magically assemble into your finished paragraph, do you? Instead, you take your letters and use them to create words. 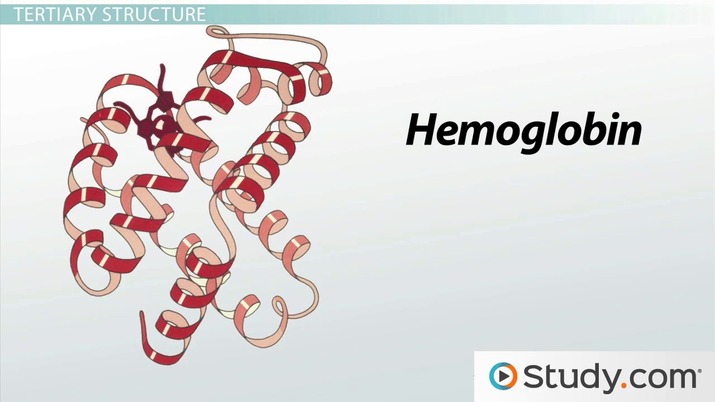 Coming up next: How a Phospholipid Bilayer Is Both Hydrophobic and Hydrophilic

So, at this point, we have the primary structure of the protein well in hand. We know the order of the amino acids, but we don't know how they arrange with respect to one another like the words in a sentence would.

So if we look at this example, we can see that there are hydrogen bonds forming between the amine nitrogens and the carbonyl oxygens in different amino acids. Now when we say backbone, what we mean are the peptide bonds in addition to the nitrogen in the amine, the carbon on which the side group sits and the carbonyl carbon. And as you can see, in the case of this alpha helix, it looks like a coil, hence the name 'helix.'

Finally, there's the random coil. As you might imagine by its name, it's an unstructured peptide chain. So this is what happens when there isn't hydrogen bonding between the backbone of the protein and it's just floating around out in space kind of flexibly. Think of it sort of like a protein piece of spaghetti.

You may also notice a funky little group sticking in the middle of the hemoglobin that has four sides. This is the heme group and is what carries the oxygen around our bodies. Just a fun fact!

So like we said, hemoglobin has two alpha subunits and two beta subunits. So how do those come together? Just like sentences don't typically stand by themselves when you're writing a story, the proteins don't always stand alone either. Some of them come together to form larger groups of proteins.

This is called the quaternary structure. This is the complete 3-D structure of a protein that contains multiple peptides or proteins. In this case, hemoglobin is made up of four different proteins. You'll notice that all of these subunits come together to form a large, donut-shaped molecule.

To give you an idea of how important and interrelated primary, secondary, tertiary and quaternary structures of proteins can be, we'll look at sickle cell anemia.

Sickle cell anemia is a disease that happens when there's a mutation in the beta subunit of hemoglobin. In people, this causes a very painful disease where their red blood cells become sickle shaped, instead of being normal round red blood cells, and don't work as well.

This single change in the primary structure causes changes in the secondary, tertiary and quaternary structures that result in a change in the overall shape of the protein. Sickle cell hemoglobin behaves normally when oxygen is bound to it, but when oxygen is not bound to it, it can form large polymers of protein where all the subunits of many different hemoglobin molecules come together and form a very long strand of sickle cell hemoglobin. This is what causes the cells to become sickle shaped.

Now generally, proteins like to exist in their most stable form and they actually are very stable and it's difficult to make them lose their structure. The way to make them lose structure is to make them undergo something called denaturation, which is the breakdown of the secondary, tertiary, and quaternary structures of protein by heat or chemical treatment. So if you treat a protein with a lot of acid, or you cook it, then it takes the protein, breaks the beta sheets and helices and turns the entire protein into a random coil.

This is why an egg suddenly becomes solid when you fry it. When you first crack an egg, all of its proteins are in their natural state. As you heat it, the proteins break down into random coils and these long strands come together and have intermolecular forces with each other, causing them to solidify into your delicious fried egg.

The secondary structure, which is the repetitive 3-D structure of a protein, comes in three different flavors: the alpha helix, the beta sheet and the random coil. These are sort of like different types of words that you can put together in the case of an essay or a story to make a sentence.

In addition, we've learned that denaturation, which is the breakdown of the secondary, tertiary and quaternary structures of proteins, can happen by heating or chemical treatment of a protein, and leaves the primary structure of a protein intact.