Christie has a B.S. and an M.S. in Biology. She teaches life and chemical science courses at college, high school, and middle school levels in MA.

The cell structure of protists allows for immense diversity in their composition and functionality. Examine the diversity of protist organelles and structures both internally and externally, including macroscopic protists that appear similar to plants. Updated: 12/14/2021
Create an account

Think about all of the humans you've ever met. Although they are all similar, you can likely tell them all apart. They probably each have different faces, different personalities, and even different voices. Humans are surely diverse, but, protists are even more diverse than humans!

By definition, a protist is essentially any eukaryotic organism that isn't an animal, plant or fungus, with eukaryotic meaning having a nucleus. So, what exactly are protists? Some are more like plants, others are more like animals, and still others are more like fungi. Some are single-celled, while others are multicellular. Some protists are photosynthetic, meaning that they, like plants, can convert the energy from sunlight into foods like sugar. Most, but not all, cannot be seen without a microscope. Some protists reproduce asexually, yet others reproduce sexually. In short, protists are a very varied group of organisms and so are the eukaryotic cells that make up protists. 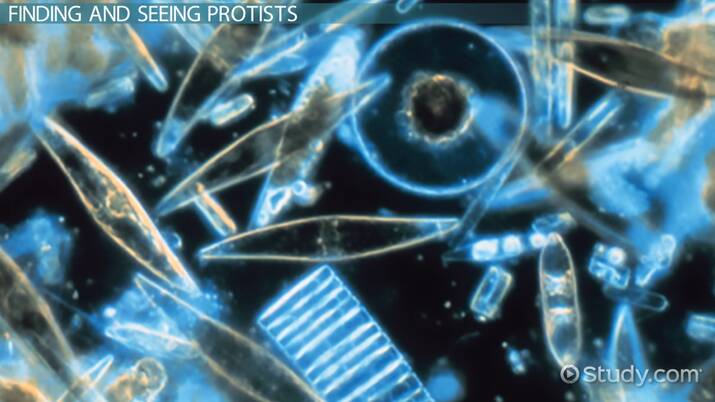 Coming up next: Protist Phylogenetic Tree

In fact, microscopist Antonie van Leeuwenhoek said, ''No more pleasant sight has met my eye than this of so many thousands of living creatures in one small drop of water,'' when he became the first human to visualize tiny protists with the help of a microscope in the 1600s. So, what exactly do these guys look like? Let's start with their innards.

Because protists are eukaryotes, each protist cell contains a nucleus. This nucleus protects the protist's DNA, which is the blueprint or code that runs every function of the protist cell. Protist cells, like other eukaryotic cells, have organelles, or tiny organs that each serve a different function within the cell. Ribosomes are the organelles responsible for synthesizing all the proteins the protist will need, while the endoplasmic reticulum and Golgi apparatus help to fold and sort these proteins.

Protists also have mitochondria, which are the organelles responsible for turning food into energy the cell can use. Photosynthetic protist cells also have chloroplasts, or the organelles that are able to capture the energy from sunlight and turn it into sugars. All protist cells are surrounded by a cell membrane, which is a fluid, protective layer that helps to separate the protist cell from its external environment, keeping everything inside safe and sound. Some protists even have an eyespot, which is an organelle that helps them detect light, so they can head toward or away from light as they desire.

Alveolates are protists that have membranous tiny sacs, called alveoli, that are found just below their cell membranes. The exact function of alveoli is unknown, but they may help with protection and regulation. Dinoflagellates are a group of alveolates that have two very interesting characteristics. They are capable of glowing in the dark, a phenomenon known as bioluminescence. When their populations experience sudden growth, dinoflagellates can also be responsible for what we refer to as red tide, or the reddish/brownish water you might see at coastlines from time to time. Dinoflagellates are often spherically shaped, usually single-celled, and, as their name might suggest, also have flagella.

Less spherical and more oblong, plasmodium cells also contain alveoli. These protists, when transferred by certain mosquitoes, can cause malaria.

There are over 100,000 different species of diatoms. These protists are unicellular algae (or plant-like protists) and come in numerous different shapes. From cylindrical to triangle to oval to star, diatoms earn an A+ when it comes to cell shapes! You can find these protists in the ocean; grab a bucket of water and you may have collected millions of these microscopic cells!

As we head past the cell membrane, leaving the inside of the protist cell, things start to get even more diverse! Unlike humans, protists don't have feet or legs to help them move around, but protists have a variety of other ways to move from place to place. Some protists, for example, have a flagellum. Anchored into the cell membrane, flagella are whip-like structures that allow organisms to move through fluids. Protists aren't the only organisms with flagella. Human sperm cells use flagella too! This is how they swim up a female's reproductive tract to reach an egg.

One group of protists, called Trypanosoma, look like tiny squiggles, each with a flagellum at the end. These protists live in tsetse flies and can cause sleeping sickness!

Some protists are really good at using their cytoplasm, which is the gel-like substance that fills their cells, and their cell membrane to move around. Take the amoeba, for example. Amoebae are able to push their cytoplasm in certain directions, causing their cell membrane to bulge in certain spots, forming little bumps called pseudopods, literally translated to 'false feet.' Amoeba use their false feet to get where they need to go, just like we use our feet.

Some protists are covered in tiny hair-like projections, called cilia. Like flagella, these projections are used for movement. Unlike flagella, however, they are much shorter, and often cover the entire cell membrane of a protist. The paramecium is a type of protist with cilia. Paramecia are oval shaped, and covered with cilia. They beat their tiny cilia so they can move to whatever they are trying to get to - like a tasty bacterium for dinner!

Ever gone swimming and accidentally collected some seaweed? Although not microscopic, these guys are actually protists! Brown algae include all types of seaweeds, from giant kelp to sea palms. Each is made of millions of tiny eukaryotic protist cells that come together, forming the seaweed you're familiar with seeing at the beach or in a lake.

Other types of algae, like golden algae, exist too. Golden algae can be unicellular or multicellular, and some look like very tiny plants. As their name might suggest, they are golden in color.

Let's take a couple of moments to review the important information that we learned in this lesson about protists and their structure. Protists are the kingdom of eukaryotic cells that can best be described by the word diverse, since they're not plants, not animals, and not fungi. In other words, protists are classified in their own kingdom, but they also share many traits with animals, plants, and fungi.

We also learned that all protists are surrounded by a cell membrane, which is a fluid protective layer that helps to separate the cell from its external environment, and that some protists even have an eyespot, which is an organelle that helps them detect light so they can head toward or away from light.

The diversity of protist cells is what helps protists themselves be so diverse. From various shapes (star, triangle, cylinder, sphere, oval...), to reproducing asexually or sexually, to different locomotion structures (like flagella, cytoplasm, pseudopods, and cilia), to the ability to produce bioluminescence (aka glowing in the dark), create red tide, which is the reddish-brownish water you might see at coastlines from time to time, or even come together into massive multicellular seaweeds, also known as algae. Is there anything protists can't do?

Protist Types & Characteristics | What is a Protist?

Modes of Nutrition in The Six Kingdoms