In emergency situations, there are a few different types and methods of providing care. Look at the check, call, and care method, the Heimlich maneuver, CPR, and how to care for bleeding, burns, and other injuries. Updated: 03/30/2022
Create an account

Be a Real Life Hero

Lifeguards, police officers and doctors are all well-trained individuals who are capable of rendering aid when you need it most.

You do not have to be any one of those, however, to actually help other people!

Just put on your action hero suit, fly to save little babies in distress and bring down evil bank robbers with an atomic gun. Ok, maybe I'm going a little overboard. But you truly can be a real-life hero and may one day find yourself in a situation where you have to be one.

Maybe you'll encounter a person who is choking or whose heart has stopped beating, and they will rely on your aid to save their life. Thus, let's cover some important ways you can provide emergency care to those in need. 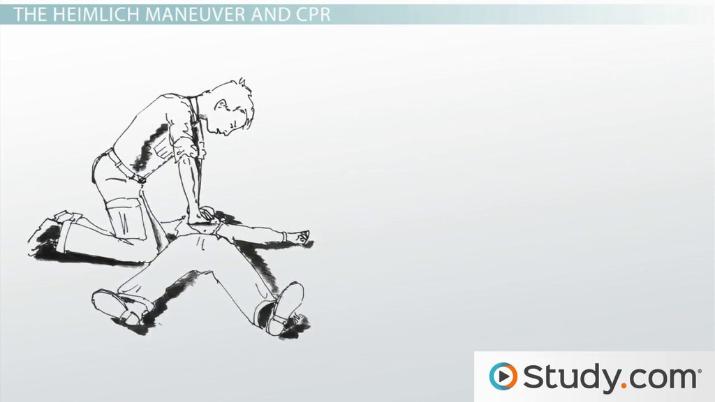 When dealing with an emergency situation, your very first step would be to check the situation. You need to figure out if there's a bear coming after you, if there's a raging river, if a bad guy is lurking somewhere in the shadows, if a power line is down somewhere and so on. Essentially, you must ensure the scene is safe enough for both yourself and the victim.

If all is safe, proceed to check the victim. Shout 'Are you OK?' to see if there's a response. Gently shake the person and tap their shoulder to gauge for a reaction.

After you've quickly assessed the basics of the situation and victim, call 911 if they're not responsive or have consented to the call if they are responsive. Give the emergency services as much information about yourself, the victim, what happened and anything else they ask of you.

Finally, you need to care for the victim. If the person is unconscious, tilt their head, lift their chin and then check to see if they're breathing, but don't spend more than 10 seconds on this. Occasional gasps do not count as breathing in this case.

Also, scan for severe bleeding and perform the care your training allows you to, the 911 operator instructs you to follow, or by using some basic techniques below, if appropriate.

Check, call and care: these are the first three steps during an emergency.

In movie after movie - one that comes to mind is Mrs. Doubtfire - people seem to choke on something during dinnertime, resulting in an emergency problem.

The Heimlich maneuver, a first aid technique for older children and adults who are choking, is often times dramatized by the actors in those films.

If you see someone is conscious and choking in real life, go help the person while someone else calls 911. Bend the person at the waist and give them five back blows with the heel of your hand, right between their shoulder blades.

Then place your arms around the choking victim's waist. Put the fist of one hand just above the person's belly button. Make sure the fist's thumb is facing inwards. After that, grab your first with the other hand. Thereafter, thrust your fist upwards and inwards really quickly five times in succession.

Repeat the five-and-five procedure by alternating five back blows and five thrusts until whatever caused the blockage is dislodged.

In other emergency instances, a person may suffer from cardiac arrest. This is kind of a problem since the heart is supposed to beat and circulate blood around the body. If that process stops, a person's organs begin to shut down and fail.

If you've been trained in CPR, or cardiopulmonary resuscitation, you know that you need to perform chest compressions, clear the airway and give rescue breaths. Experts recommend 30 compressions prior to two rescue breaths. The current guidelines for CPR can be found from the American Red Cross.

Put the person on their back on a hard surface. Kneel next to their neck and shoulders. Keeping your elbows straight, place the heel of one hand on the center of the person's chest, right between their nipples. Take your other hand and place it on top of the first hand. Your shoulders should be right above your hands as you do this.

Now, using your upper body weight, compress the chest at least two inches. Continue doing so, 100 compressions a minute, until rescue personnel arrive or the person begins to show signs of movement.

This method of untrained CPR is advisable when rescuing teens and adults but not for younger children, victims of drowning or other suffocation. For the latter cases, a more detailed course on CPR that teaches you how to properly clear the airway and give rescue breaths is advised.

When performing any lifesaving procedure, it's always advisable you wear protective gloves whenever possible. This is especially true if you're going to be coming into contact with bodily fluids, like blood. This is because many diseases can be transmitted via blood.

If you notice that a person is bleeding, get some protective gloves, like latex gloves, and sterile dressing. Cover the wound with the dressing and apply pressure on the wound until the bleeding stops. After the wound has stopped bleeding, cover it with a dressing, but make sure it's not too tight.

But if the bleeding doesn't stop or you can tell the wound is serious, call 911 right away.

Another case where a dressing may need to be applied is a burn. If a burn is minor, run it under cool, clean, water and cover it with a sterile dressing. If it looks severe, call 911 to get immediate help as severe burns can kill a person very quickly.

If you suspect someone has been poisoned and they're conscious, get in touch with the National Poison Control Center, and if they're not breathing or are unconscious, call 911 right away.

Finally, if someone has sustained what you suspect is a head or spinal injury, minimize the movement of a person's head, neck and spine. Stabilize the head in the position in which you found it.

I definitely hope that you never have to come across a terrible situation where emergency care is necessary, but at the very least, you now have a basic understanding of how to help others or when to call for help if you need it.

Remember that at the very top, check, call, care are the first three steps during an emergency. Check the scene for dangers, check to see if the person is responsive, call 911 if they're not or if they've consented to your calling of 911 and then proceed to care for the victim.

One possible thing you may have to do is the famous Heimlich maneuver, a first aid technique for older children and adults who are choking. This maneuver may be preceded by five back blows before using your fist to thrust upwards and inwards five times into a person's abdomen from behind in order to help dislodge something stuck in the windpipe.

Other times you may be called upon to perform CPR, or cardiopulmonary resuscitation. Unless you've been officially trained in the advanced techniques of CPR, you should stick to performing just chest compressions at a rate of 100 per minute until help arrives.

Finally, if you know that someone is bleeding severely, is terribly burned, has been poisoned and is unconscious or has suffered from a neck or head injury, call 911 right away.

The process of reviewing this lesson could enable you to:

The 9 Regions of the Abdomen