Mary has taught elementary school for six years and has a master's degree in education.

Using specific and clear reasons adds power to an opinion piece and can help kids have their voices heard. Explore the elements of a strong and convincing argument using the real-world example of a skate park. Updated: 01/04/2022
Create an account

Let's pretend your community is considering building a skate park near the downtown area. Most likely, not all residents of the community will agree on whether or not that's a good idea. They will have a variety of different opinions on the matter.

Put simply, opinions are a person's thoughts or views on something. And while there isn't always a right or wrong opinion, people are much likelier to understand and agree with your point of view if you provide strong reasons or facts to support your opinion. 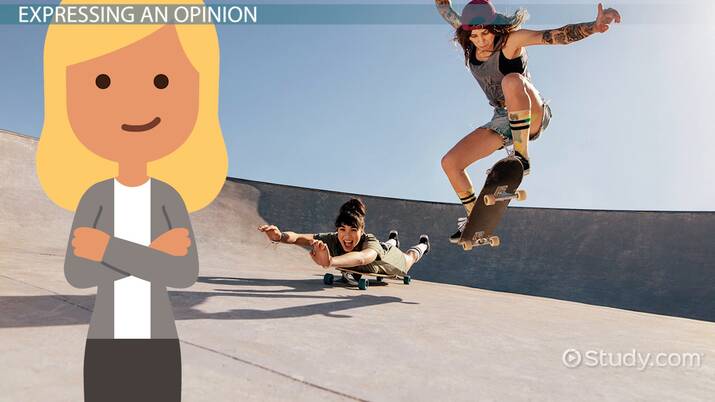 Coming up next: Essay Writing: Lesson for Kids

This might happen to some kids, but it isn't likely for everyone!

Communicating clearly is critical when providing reasons for an opinion. The reasons we mentioned are clear and give enough detail to make someone understand why building a downtown skate park is a good idea. In contrast, unclear reasons might look something like this:

The problem with these reasons is that they don't make a clear connection between the reason given and the proposed skate park. When evaluating your reasons for clarity, it's best to imagine your readers are aliens who have no concept of how a community or a skate park operates. It's your job to explain all the necessary information so they can understand (and agree with) you!

Arguing against yourself might sound like a silly way to provide solid reasons for your opinion. However, if you try to think of arguments against your opinion before someone else has had the chance, you can make sure your reasons are strong enough to hold up.

Take the third plausible reason we listed: a downtown skate park will promote good physical health for kids. If you wanted to argue against that reason you might say, ''That's great, but what do I care about a bunch of kids' health? Nice for them, but that doesn't help me any!''

Now, to make sure your original reason is strong, you have to poke a hole in the counter argument. You could say that improving kids' health will help the whole community by reducing health care costs both now and later. This is something that positively impacts the entire taxpaying community, not just the kids whose health improves.

All right, let's take a moment to review what we've learned. When writing an opinion piece, which involves a person's thoughts or views on something, it's important to come up with clear, plausible reasons, meaning it's likely to be real or to actually happen. Once you've done that, argue against yourself to test your reasons and make sure they can hold up to a little criticism. Follow these easy steps and you'll be expressing your opinion like a champ in no time!

How to Write an Opinion Piece: Lesson for Kids

Creating an Organizational Structure for an Opinion Piece: Lesson for Kids

How to Compare & Contrast Stories by One Author: Lesson for Kids

Supporting Claims with Evidence & Reasoning | How to Write a Claim Statement