A Quadrilateral and a Parallelogram 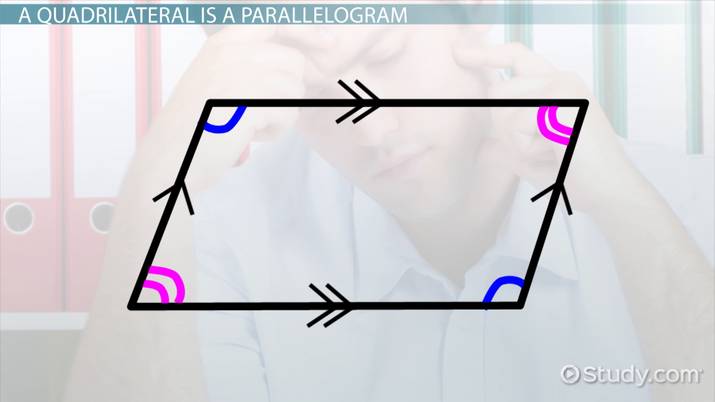 A Quadrilateral Is a Parallelogram

But first, let's go over five ways you can use to prove that a quadrilateral is a parallelogram. Depending on what information you have to work with, you'll be using one of these five ways.

1. Prove that both pairs of opposite sides are parallel.

2. Prove that both pairs of opposite sides are congruent.

If both pairs of opposite sides of a quadrilateral are congruent, then you'll always have two opposite pairs of parallel sides. Congruent means that they measure the same. Think about it: two congruent sides separating the other pair of opposite sides must always keep those opposite lines the same distance apart. This means, then, that the opposite sides are also parallel.

3. Prove that one pair of opposite sides is both congruent and parallel.

4. Prove that the diagonals bisect each other (that they can divide each other into two equal parts where they cross).

This one is a bit harder to visualize. But you can play around with it by taking two different-sized sticks and crossing them in the middle of both sticks. These two sticks are the diagonals inside your parallelogram. You'll see that no matter how you cross your sticks, as long as they cross in the middle, you'll always get a parallelogram. Your two sticks are the blue and green lines. You can see that these are the diagonals inside the parallelogram.

5. Prove that both pairs of opposite angles are congruent.

Now let's look at an example:

We begin by making our necessary marks to show our given information. Place tick marks on sides KP, PR, and OR to show that they are all the same, since both triangles are isosceles and they share a common side. An isosceles triangle is a triangle with two equal sides and a third side called the base. The two angles next to the base are also congruent. We also place congruent marks on angles K, PRK, O, and OPR.

Now we can go ahead with our proof.

With this proof, we prove that the quadrilateral is a parallelogram by proving that both pairs of opposite angles are congruent.

Making your proof can take a while, and there is definitely more than one way to go about writing this proof. The most important thing for you to remember is that your proof needs to prove one of the five ways mentioned.

Let's review. A quadrilateral is a four-sided flat shape. A parallelogram is a quadrilateral with two pairs of opposite and parallel sides.

To prove a quadrilateral is a parallelogram, you must use one of these five ways.

Proving That a Quadrilateral is a Parallelogram

There are five ways to prove that a quadrilateral is a parallelogram:

Proving That a Quadrilateral is a Parallelogram
Related Study Materials

Median of a Trapezoid: Definition & Theorem

Properties of Concurrent Lines in a Triangle