Lesson Transcript
Instructor: Robert Turner
Psychodynamic psychology began with Sigmund Freud, who considered the unconscious forces and inner conflicts as the root of our motivations and conscious discomfort. Discover the definition of some of Freud's key concepts, check the explanation of his main ideas, and see how his theory of psychoanalysis gave birth to revised perspectives among people who styled themselves Neo-Freudians. Updated: 08/15/2021
Create an account

What Is Psychodynamic Psychology?

People establish defense mechanisms, which are mental defenses to protect themselves from unwanted memories and inner conflicts. Coming to terms with one's defenses is an important part of successful therapy. For example, uncovering a woman's suppressed hostility toward her mother can help her come to terms with those feelings and, perhaps, establish a more positive relationship with her mother.

Most of our deep-seated and largely unconscious conflicts arise during early childhood. For example, in Freud's theory, young boys suffer from an Oedipus complex. In a nutshell, that means a boy unconsciously lusts for his mother and resents his father. In the Greek tragedy Oedipus Rex, the protagonist slays his father and beds his mother, not knowing that the woman is his mother and that the man he killed was his father. When he learns the truth, he blinds himself.

Typically, through the use of free association, people's inner conflicts will gradually, or sometimes suddenly, be brought to consciousness and resolution by way of the relationship between the therapist and the patient. To understand free association, have a friend read you a list of words. For each word, speak the first word that comes to your mind. For example, she says 'apple' and you say 'pie.' Or, I say 'vital' and you reply 'vicious.' The latter tidbit may be a hint about your inner conflicts.

Insight is a vital component of successful therapy. Unlike behaviorist psychologists who have no interest in our inner lives, psychodynamic therapists feel that they must consult their intuition and personal feelings about their clients if they are to understand what motivates them. 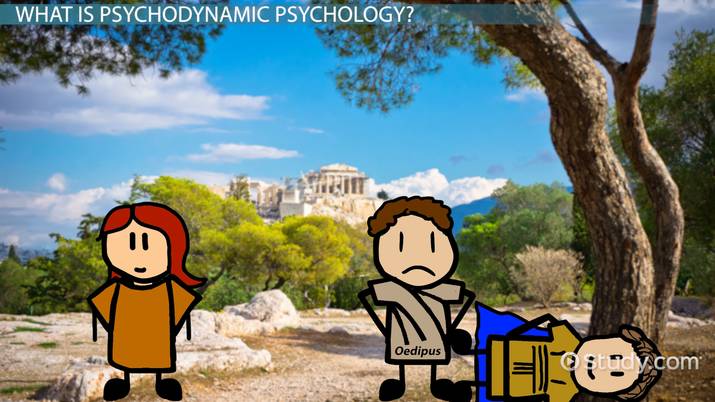 The Freudians and Neo-Freudians

Let's first look at the original Freudian: Sigmund Freud. For Freud, the idea of dynamic psychology was based on the idea that energy powered our psychology in much the same manner that energy drives the processes of any organism, including the human body. What he called the id is the source of our psychic energy. The id is amoral, instinct driven, and totally buried in the unconscious. It is driven by the pleasure principle. The id wants what it wants and it wants it now! A lot of what the id wants is expressed in sexual energy Freud called libido.

The superego mainly lurks in our unconscious but pokes its way into our conscious mind often enough to make us feel guilty about socially unacceptable behavior. What we normally call our conscience is stored in the superego. Finally, the mostly conscious ego is driven by the reality principle. It has the job of slapping down id-impulses and taking instructions from the superego, all the while trying to make the most of day-to-day life.

Now let's look at the famous and infamous Carl Jung. In Jung's analytical psychology the three parts of the psyche are the ego, the personal unconscious, and the collective unconscious that connects us to our ancestors. And, in contrast to Freud's perspective, Jung viewed the basic dynamic of the psyche as striving for wholeness. You can think of that this way: For Freud, the psyche is part of the organism and, therefore, mortal. Jung's use of the term 'psyche' derives from its original meaning in Greek, which was 'soul.' Since that idea implies life beyond death, Carl was accused of being a mystic.

The terms 'introvert' and 'extrovert' come to us from Jung's psychology. So does the concept of archetypes. Archetypes can be thought of as emotionally charged symbols. The wise crone, the warrior, and symbols of rebirth, like the transition from caterpillar to butterfly, are archetypal aspects of our collective unconscious.

Let's close with a little factoid for you: The ancient Greek word 'psyche' meant both 'soul' and 'butterfly.'

Now let's look at Alfred Adler. Alfred Adler's individual psychology rejected Freud's emphasis on sexuality. Instead he maintained that social motives, like status and wealth, motivated people's behavior. In Adler's view, the dynamic 'mover' in human psychology is a quest for superiority, and as people strive for perfection, Freud's 'will to pleasure' is replaced by a will to power. Adler was deeply influenced by the writings of Friedrich Nietzsche. Nietzsche's concept of the über mensch ('Superman'), as one who rises above common morality, was adopted by Adolf Hitler and the Nazi Party.

Let's review. Remember that all psychodynamic psychology theories focus on the idea that unconscious psychological forces impact the processes of human development. Core principals also include an importance of insight and personal relationships. People establish defense mechanisms, which are mental defenses to protect themselves from unwanted memories and inner conflicts, and it's the goal of psychodynamic psychology to overcome these, usually through various methods like free association, which aims to bring people's unconscious conflicts into the conscious mind through seemingly random association between two words. Many of these conflicts arise in early childhood.

Freud's favorite example was that of the Oedipus complex, which says that, in essence, a boy unconsciously lusts for his mother and resents his father. While Freud and his theories on the id (pleasure seeking), ego (the reality principal), and superego (conscience), are well known, there were several theorists who built off his theories into their own versions of psychodynamic psychology. There was Carl Jung, who believed people pursued a sense of wholeness, invented the idea of introverts and extroverts, and emphasized the importance of archetypes, or emotionally charged objects. There was also Alfred Adler, whose individual psychology focused on the idea that social motives, like status and wealth, motivated people's behavior. Finally, there was Karen Horney whose ideas on female representation and respect in society, or lack thereof, has led many to say she was among the first modern feminists.

Etymology: Study of Word Origins | What Does Etymology Mean?