In this lesson, learn about the relationship between clothes and emotional states. Examine how clothes can impact self-confidence, mood and attitudes and explore some psychological effects that color, patterns and accessories can have on your mood. Updated: 08/24/2022
Create an account

Yesterday, Lisa woke up feeling good and took the time to choose a nice shiny outfit. Suddenly, she was feeling confident, people were giving her compliments and she was feeling great. The clothes you choose to wear might be affecting not only how others see you but also the way you feel.

There is a growing interest in examining the possible relationship between what we wear and our emotional states. Some studies suggest that the clothes you choose have a psychological effect on your mood and attitudes. Remember that psychological effects are simply the changes in how we think and feel, and thus behave.

We sometimes make clothing decisions based on our mood but also, certain outfits can make us feel better or worse, more confident or more shy. It's a cycle of stimuli and responses. A certain mood can make us choose some type of clothes, which in turn will reinforce the way we're feeling.

If you are feeling happy and confident this cycle might work great, but if you're feeling down, maybe it's time to break the cycle and let your clothes help you. 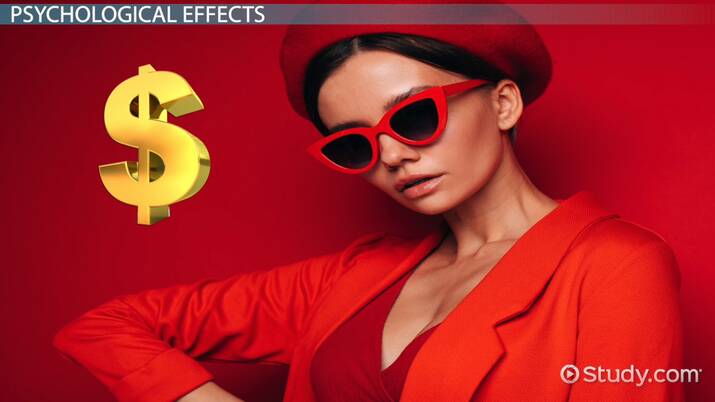 Try it now
Back
Coming up next: What is the Textile Industry?

In our history, clothes have been practical objects meant to keep people warm. However, as tools and technologies evolved, clothes became a social matter. We started associating them with status, wealth, social occasions, good taste, personality, and many other fixed ideas. As a result, clothes became part of the culture and acquired specific meanings.

Of course, every individual is unique and personal preferences are also important. However, there is a tendency to feel a certain way about some clothes and this has to do with those predefined cultural and social structures that we learn in our early years.

For example, in America, the clothing you select for a funeral is unlikely to include a colorful dress (or shirt) with animal print. You've learned that restrained black attire is the social convention for funerals. But in other cultures, that might not be the case and someone could actually be offended by your black clothes.

Let's examine some effects of the most common aspects of clothing, such as color, cut, design patterns, and accessories.

The psychological effects of color are often taken into consideration in graphic design and advertising. Many people believe that red evokes passion and confidence, and orange energy and enthusiasm. White is often associated with purity and black with seriousness.

Clothes of a specific color can evoke feelings and attitudes associated with them. For example, a red outfit could make you feel confident and passionate and might attract attention towards you. Some experiments have found that waitresses wearing red tend to receive higher tips. Although blue might inspire calm, blue clothes might also make you feel a little ''bluer,'' so they might not be the best choice if you are feeling sad.

The cut or silhouette of clothes can also have an effect. Although your comfortable baggy pants could be the first pick if you're feeling down, they might not help to cheer you up. Something that highlights your body figure might work better.

A woman feeling beautiful and sensual might choose to wear a short dress with a figure-enhancing cut. She may want simply to impress, but whatever the reason, wearing that dress might make her feel even more beautiful and likely to produce a positive impression on others.

The different design patterns of clothes can boost a specific mood and make us feel better or worse about our image. A dress with an elaborate pattern of flowers might make a woman feel confident about her beauty and perhaps also help her feel younger.

If a man isn't all that confident about his weight, perhaps horizontal lines wouldn't be a smart choice. This striped pattern usually makes people look wider and shorter, so he might end up feeling fatter and less self-assured about his figure.

Deciding to wear makeup, jewelry, a certain purse, or a hat can also influence self-confidence and the way women feel about themselves. Women who feel depressed are usually less likely to wear makeup. A cheerful lipstick color and a bright eyeshadow could make her feel more attractive but the mood might not let her go for it. On the other hand, wearing dark makeup or none at all might reaffirm the negative mood and perhaps she will end up feeling even worse.

Despite the mood that might motivate clothing selections or the possible effects on the way someone is feeling, we must avoid labeling people just for what they're wearing. After all, that selection might be for a specific occasion or could have been just a random pick.

All right, let's now take a moment or two to review. As we learned, the clothes we wear and how we feel are somewhat related. We often make clothing decisions based on mood, but at the same time, outfits might reinforce or change the way we feel. Clothes were initially meant to keep people warm, but as society evolved, they became a social matter. Now they're associated with social structures and cultural meaning. The way we feel about certain clothes and how they affect us can be influenced by those preconceptions.

Different aspects of clothing design can have psychological effects, meaning changes in how we think and feel, and thus behave. A red attire can make someone feel confident while black might inspire seriousness. The figure-enhancing cuts often make people feel more attractive and confident while baggy pants are a common pick among those feeling down.

Some design patterns might boost confidence while others can make someone feel unsatisfied. Makeup and accessories can also impact the way a woman feels and might cheer her up or perhaps make her feel down.

Fashion History, Evolution & Timeline | What is the History of Fashion Design?

Advantages of CAD/CAM in Textiles

Types of Yarn & How Yarn Is Made | What Is Yarn?

What Are Home Textiles?

What is Block Printing? | Ideas & Designs

Praxis English to Speakers of Other Languages (5362) Prep