There are various psychological research tools used to investigate human behavior. Learn about observation and its two types; measurements that assess cognitive, emotional, social and behavioral or motor elements; and experimentation, with examples of famous psychological experiments. Updated: 05/03/2022
Create an account

Psychological science occupies a unique place amongst the sciences. It is a mixture of observation, measurement and experimentation on a wholly unique subject: the human mind. In the course of psychological research, scientists have attempted several mediums to try and understand the mind. Some tools help us understand what makes us human; others have had harmful side effects. 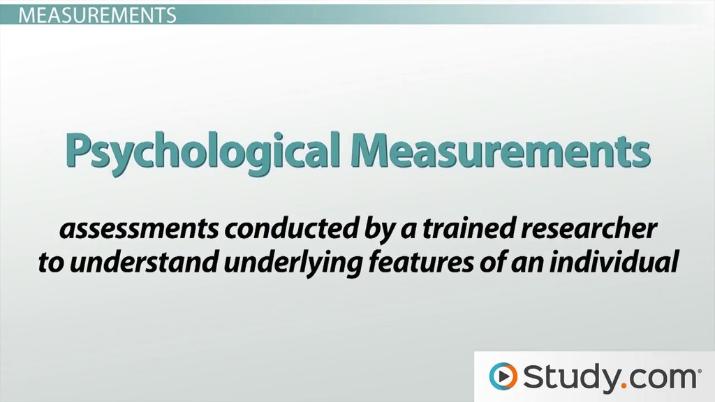 Try it now
Back
Coming up next: Non-Experimental and Experimental Research: Differences, Advantages & Disadvantages

Everyone has a bit of a psychologist in them. It usually comes out when we watch other people and attempt to understand why they are doing something. Observation is the act of meticulously viewing another's interactions with their surroundings. It is a little bit more complicated than just looking at someone doing something.

Naturalistic or field observation happens when a researcher carefully observes and notes a participant in their natural setting without interference. For example, a researcher might be curious about how two people in different social positions interact in a job setting. This can't truly be created in the lab, especially without the two people knowing they're being watched, so it has to be observed live in the field.

A laboratory observation is when a researcher creates a precipitating condition and then observes the ensuing behaviors in a natural environment. What this means is you start something, and then see how people run with it. One famous study that involved laboratory observations has been nicknamed the Bobo doll study. Albert Bandura had two groups of children each watch a different video, one with an adult playing nicely with a Bobo doll and the other of an adult hitting the inflatable doll. When the children were let loose in a playroom, the ones who observed the violent behaviors of the adults acted in the exact same way, while the other children largely ignored the Bobo doll.

A notable issue with observations is the observer bias, or when an observer sees what he or she wants to see. Looking back at the aggression example above, it is possible that the researcher might record acts as more aggressive or violent than they actually were because this is what they are looking for. Some ways to avoid observer bias is to have the single or double blind study, as well as recording what you are observing for later verification.

Psychological measurements are assessments conducted by a trained researcher to understand underlying features of an individual. Assessments can be about many things, including:

Psychological measurements are often laborious and require extensive time to score, which means they are rarely used in large-scale research studies. However, that does not discount them when they are used. They can provide detailed information on a person not available to a researcher by just observing. For instance, Alexander Luria and others combined cognitive, emotional and behavioral indices from hundreds of cases of accidental brain injuries to create a comprehensive test to assess for traumatic brain injuries.

One of the backbones of any science is the ability to perform experiments. Psychological experiments are designed and controlled scenarios that manipulate a variable to test a hypothesis or answer a question. The exact variable manipulated can be almost anything that the experimenter can control. For instance, some famous experiments include the following.

Experimentation provides us with a great deal of information about how people will react and think when presented with certain stimuli. While I have selected some of the more popular studies in psychology, there are literally thousands that have been completed.

Psychological research has taught humans a great deal about themselves. One way is by simple observation, or the meticulous viewing of another's interaction in their natural habitat. Another way to examine how they think, feel and act is by conducting detailed measurements, which are assessments or interviews conducted to understand the underlying thoughts and emotions. Lastly, there are simple and complex experiments, or designed and controlled scenarios to test a hypothesis. Psychologists have learned a lot using their tools, but there is still a lot to learn.

What is Human Subjects Research?

The Importance of Measurement in the Research Process

What is Human Subjects Research?

The Importance of Measurement in the Research Process