Billy Milligan commited several crimes but was found innocent due to his dissociative identity disorder (DID), which causes individuals to develop more than one personality. Dive deep into Milligan's case study, his DID, personalities, and crimes. Updated: 04/04/2022
Create an account

This lesson addresses the topic of suicide. If you or someone you know is struggling with thoughts of suicide, please reach out for help. The following website can provide support: https://suicidepreventionlifeline.org/

Dissociative Identity Disorder (DID) is the disorder when someone has a ''disruption of identity.'' Originally called Multiple Personality Disorder (MPD), this disorder means an individual has two or more personalities, with one active while the others lie dormant. This results in chunks of time being lost for the main personality. The additional personalities can be any age or gender and tend to have unique behaviors, speech patterns, and actions.

Most psychologists agree that DID usually results from a traumatic experience or experiences. Individuals use their alter personalities to escape from the emotional or physical abuse of this trauma. 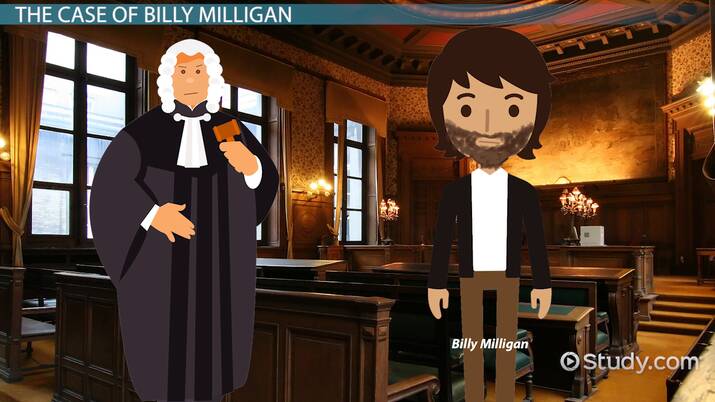 The Case of Billy Milligan

Billy Milligan is one of the most famous cases of DID. He was the first person in the United States with this disorder who was found not guilty of his crimes by reason of insanity. During the trial, many psychologists argued about the existence of DID and assumed it was a ploy rather than a valid disorder. Since Billy Milligan's was found not guilty by reason of insanity, it gave credence to the disorder.

Billy Milligan was born on Valentine's Day, 1955. His father, John Morrison, had an affair with his mother, which resulted in two children. Morrison was a comedian who suffered from depression and committed suicide when Milligan was only four. This may have been the start of Billy's disorder, but it's unknown. Eventually, Billy's mother married Chalmers Milligan when Billy was eight years old. Billy later accused his stepfather of raping him, burying him alive, and hanging him by his fingers and toes. However, this was never proven, although it could be a definite reason for Billy's dissociative identity disorder.

During his lifetime it was determined that Billy had 24 separate personalities. He gained new ones during his treatment, because of the environment of the health facilities and the assessment of the doctors. Each of the personalities had their time in the ''spotlight'' as Billy called it. There were two subsections of personalities. The first ones were protective and usually good people. The second ones were the ''undesirables,'' which often got Billy into trouble, so Billy did not like to mention them. The personalities from the first group were a few that were seen the most.

First there was Ragen, a 23-year-old Yugoslavian, and he was the strongest in physical ability of all the personalities, also called ''the keeper of the hate.'' Ragan spoke with an accent and was there to protect Billy and the weaker personalities from the harsher world outside. He also is the personality that committed the robberies.

There was Adalana, which was one of the very few female personalities. She was 19 and a lesbian who desired love, and was willing to use violence to obtain it. She also is the main reason for the court cases, being the active personality during the rapes. She's also one of the few personalities who could take control without permission.

There was Arthur, who was an intelligent 22-year-old with an English accent. He was very strategic and could choose when to be the active personality.

There was Allen, who was the only smoker in the group. He was often the one to help Billy get out of trouble. He assumed control when Billy needed to talk his way out of a bad situation. He was also right-handed, when Billy was actually left-handed.

And finally there was David, who was put in charge when Billy experienced pain. Only eight years old, he dealt with the harshness of reality when all the other personalities could not.

Billy Milligan's personalities committed a variety of crimes. Ragen robbed stores and people, while Adalana raped three girls in the late 1970s out of a desire to be loved. When Milligan was put on trial, his lawyer and the police that arrested him realized that there was something severely wrong. Eventually, after a few medical assessments and tests, the court decided to deem Billy not guilty by reason of insanity. He was then sent to Athens Mental Health Center.

It was during his stay here that one of his largest personalities emerged. The teacher was a combination of all of the personalities. This personality could account for all of the time, education, and skills of the others. This is considered a fused personality. Originally Dr. Caul, the physician who treated Billy, planned on fusing all of Billy's personalities into one so that Billy could be released. However, Dr. Caul realized during his session that Billy already had a fused personality. According to Dr. Caul, the teacher was incredibly smart, could carry on an engaging conversation, and had each of the talents of the other personalities.

After being seen by Dr. Caul, Billy was eventually released but spent many years in and out of the hospital. Although he had a fused personality, the other personalities would come out when Milligan was harassed or he thought he was in danger. The original Billy rarely came out; it was usually the teacher.

For years the press followed Billy around, wondering if he was going to commit other crimes. However, Billy eventually managed to elude the press and lived the rest of his life out of the reach of the media. He eventually died of cancer in 2014 at the age of 59.

All right, let's take a moment to review what we've learned. Billy Milligan is famous because he was the first person with dissociative identity disorder that was deemed not guilty by reason of insanity, which gave credence to this mental illness. Dissociative Identity Disorder (DID) is a disorder where two or more personalities exist within the same person, and are used to escape some sort of trauma in the person's life. Billy Milligan had 24 personalities, some of which committed crimes. Eventually, Milligan created a fused personality, or a combination of all the different personalities, which became the main personality the rest of his life.

What is Compliance in Psychology?