View bio
Peter Tripp was a well-known New York City radio personality who stayed awake for over 200 hours as a stunt to raise money for charity. This lesson discusses how his experience permanently changed the way psychologists understand sleep deprivation. Updated: 09/03/2020
Create an account

In January 1959, a New York City DJ named Peter Tripp did something highly unusual: He stayed awake for 201 hours in a row. Tripp had decided to do what he called a ''Wakeathon'' to earn money for the March of Dimes charity and to break the current world record. He performed most of this stunt in a glass booth in the middle of Times Square.

Since Tripp was not going to be sleeping for over eight days, medical doctors and psychologists agreed to stay with him during the event to make sure he was safe. Originally, the doctors advised against it because they thought it could be dangerous, but Tripp was determined, so they went ahead with the experiment. Since this length of wakefulness had yet to have been tried or recorded, psychologists and doctors were interested to see how it would affect him. 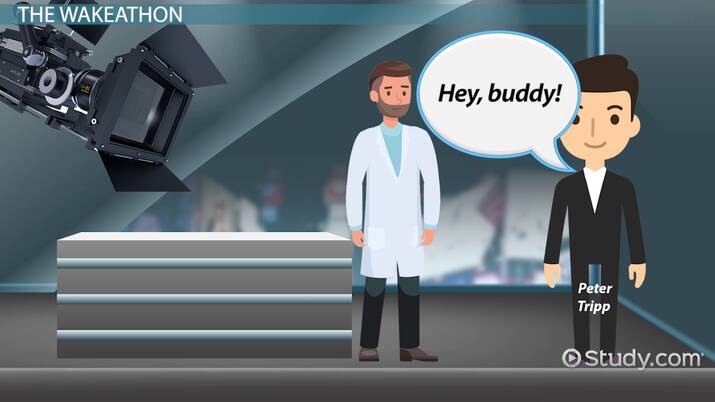 Coming up next: What is Brain Damage? - Causes & Effects

Peter Tripp did the marathon of sleep deprivation completely on air, and doctors were with him around the clock. During the first stages of sleep loss, Tripp seemed to be just fine. He was known to be a fun and cheerful fellow, and he kept up his jokester attitude until the second day. By that time, he was getting angry easily and began to swear at people he knew. His normal amiable behavior was replaced with surliness and cruelty. The doctors noticed during this time that his body temperature was also lower than normal.

After five days he started to hallucinate and thought he saw people who weren't there. He talked about cobwebs on people's faces, and a suit that looked like ''fuzzy worms.'' One of his most terrifying moments was seeing a spider crawling around and out of his shoes. It was then that the psychologists began trying to figure out what was happening. Until Tripp's experiment, hallucinating to this extent had not really been observed in instances of sleep deprivation. As the experts watched Tripp, they realized his hallucinations were following a pattern.

Tripp would start seeing things that were not there in 90-minute intervals, which was very similar to the timing of Rapid Eye Movement (or REM) sleep, during which we have our most vivid dreams. He would occasionally see things at other times, but not as severely as he did during those 90 minutes. Psychologists determined that these hallucinatory sections were ''waking dreams.'' Although Peter wasn't sleeping, his mind was nonetheless, in its wakefulness, dreaming. They also observed his brainwave patterns, which showed that he was sleeping during these hallucinations, even though he was awake.

By the end of the whole ordeal, Tripp started to struggle with his identity. He was having delusions and paranoia and didn't trust anyone around him. He did not know who he was and at times thought he himself was an imposter. He also thought the doctors were conspiring against him.

After the 201 hours of wakefulness, Tripp was said to have slept for 13-14 hours, after which he initially appeared to be fine. It's at this point that the stories about him differ, depending on the source. Some reports state that Tripp was fine in the long run, and showed no negative effects. However, some people observed an obvious depression in Tripp that lasted for over three months after the event. Additionally, he went on to have four unsuccessful marriages and got caught in a ''payola,'' or bribery scandal that resulted in his being fired from his DJ position. There is no scientific evidence that these events were a direct consequence of his sleep deprivation, but people who knew Tripp seemed to think his behavior was never the same after the ''Wakeathon.''

Aright, let's take a moment to review what we've learned!

In this lesson, we covered the story of Peter Tripp, a New York City DJ, who did a charity stunt for which he stayed awake for 201 hours in the late 1950s. During this time, he hallucinated and saw terrifying things that were not there. Psychologists realized that, although he was awake, Tripp was experiencing REM sleep patterns, which is when we have our most vivid dreams during a normal sleep session.

As he went longer without sleep, he started having delusions and paranoia, which made him doubt the trustworthiness of the doctors as well as his own identity. Although Tripp went to sleep after the stunt and appeared to come out of the event unscathed, many people in his life seemed to think that it changed his behavior forever, making him permanently angrier and depressed.

Prompts About the Psychology Case Study of Peter Tripp and Sleep Deprivation:

In approximately two to three paragraphs, write an essay that discusses why doctors and psychologists initially advised Tripp against doing the ''Wakeathon,'' why they were interested in it, and what safeguards they implemented for Tripp.

Example: Doctors and psychologists monitored Tripp for the entire duration of the ''Wakeathon.''

Write an essay of at least two to three paragraphs that explains what the doctors and psychologists observed and concluded about Tripp's hallucinatory episodes during the eight-day period of sleep deprivation.

Example: Although Tripp was physically in a state of wakefulness, his hallucinations were generated when his brain would enter the REM stage of sleep.

In approximately three to four paragraphs, write an essay that describes the immediate and long-term consequences of Tripp's ''Wakeathon.'' Be sure to address the issue of how much scientific evidence there was to prove that these consequences were the result of the ''Wakeathon.''

Example: Tripp suffered from depression for over three months following the ''Wakeathon.''

What is a Sleep Cycle? | Five Stages of Sleep