People approach late adulthood and the process of healthy aging in different ways. Explore the three most common psychosocial theories about aging, including the disengagement, activity, and continuity theories. Updated: 10/01/2021
Create an account

Mitchell, Josie, and Maxine all live down the hall from each other in a senior living facility. But their experience in the facility is very different. Mitchell does things the way he's always done them, the way he did them when he was in his own house. He gets up in the morning and reads his paper, drinks orange juice with his cereal, and then settles in to read a book or play a board game with friends.

Maxine is different, though. She's so excited about all the activities at the senior center that she loves to participate in all sorts of things. She takes computer classes several days a week and dancing lessons in the afternoons. Last week she participated in a chess tournament and once a week she goes to a pottery class. Her life is busier now than it's ever been.

Josie, though, is not nearly as active as either Mitchell or Maxine. She spends most of her days reading or watching TV on her own. She doesn't really get out and socialize, instead preferring the quiet of her own quarters. She's not depressed; she just really enjoys the peace and quiet of being alone.

Mitchell, Josie, and Maxine are all in late adulthood, which is the time of life after age 65. During this time, many people find that their lives change as they retire, watch their kids move out on their own, and perhaps move into a senior living facility like Mitchell, Josie, and Maxine. But what's the healthy way to approach late adulthood? How do people age? Let's look at three major psychosocial theories - that is, psychological theories that deal with sociability - that try to explain what healthy aging looks like. 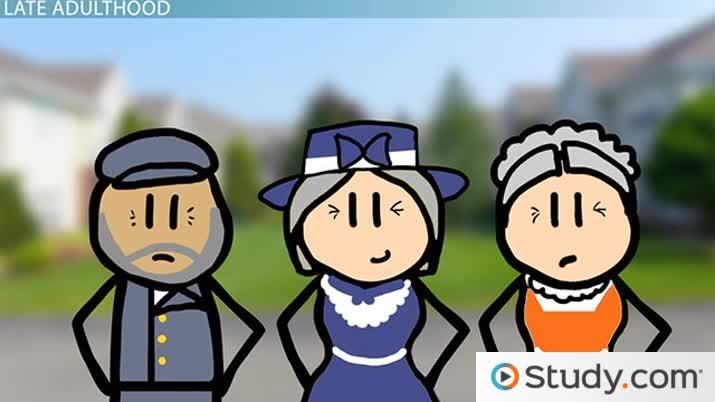 Try it now
Back
Coming up next: Major Mental Health Concerns in Late Adulthood

When Josie was younger, she was very busy. As she raised her kids, she was president of the PTA, assistant coach for her daughter's soccer team, and on the fundraising board for the local library. Not only that, she frequently held dinner parties for her friends and her husband's work colleagues. Every day was jam-packed! Now, though, she likes being able to withdraw and spend her days in a quiet, lazy fashion. Some days she doesn't even see anyone else because she's just enjoying her time in her room, reading or watching TV alone.

The activity theory of aging says that it is healthier for older adults to be active during their golden years. As with the disengagement theory, the name says it all: successful older adults are active, hence the theory being called the activity theory. The thinking behind the activity theory is that people are happiest when they are actively involved in society. Whether it's salsa dancing, a book club, or traveling, being involved in an active part of your own life can lead to great life satisfaction. So the theory is that continuing to be active, or to become more active as Maxine has, will lead to the healthiest, happiest late adulthood.

But is there a balance between disengaging and being really active? Mitchell has kind of found that balance. He's pretty much the same as he was before retirement: he still reads his paper with breakfast and still likes to read and play games with friends. He even still meets his buddies for a game of poker once a week.

The continuity theory of aging says that people will maintain their activity and social levels that they had before late adulthood. Remember this one by thinking about the fact that they are continuing their life the same way it was before. This theory tries to find a balance between activity and disengagement and recognizes the differences in individuals. A shy, quiet person might not find a lot of pleasure in being active, like Maxine, but completely withdrawing from society, like Josie, also might not be the healthiest thing. So the continuity theory says that people will often simply carry on as they did before.