Motivation is, figuratively, a powerful force that can come from two directions. Examine and compare the differences between the push and pull theories of motivation. Updated: 01/11/2022
Create an account

Have you ever felt drawn to something? What about feeling like you'd do anything to avoid something else?

These two feelings, being drawn to and avoidance of events, are the two motivations in the push and pull theories of motivation. Every motivation we have, every action we perform, is driven by either a desire to attain a certain result (pull) or a need to avoid an unwanted result (push). While these are two distinct motivations, they can be visualized as opposite sides of the same coin: two motivations acting in one theory.

Motivation is that which gives us a desire to behave in certain ways or the reason we do things. What is interesting here is that sometimes the reason for acting is positive, in that we want the outcome, and sometimes it is negative, in that we are trying to get away from an outcome. Let's take a closer look at these two motivational directions, defining them more clearly as we give examples of each. 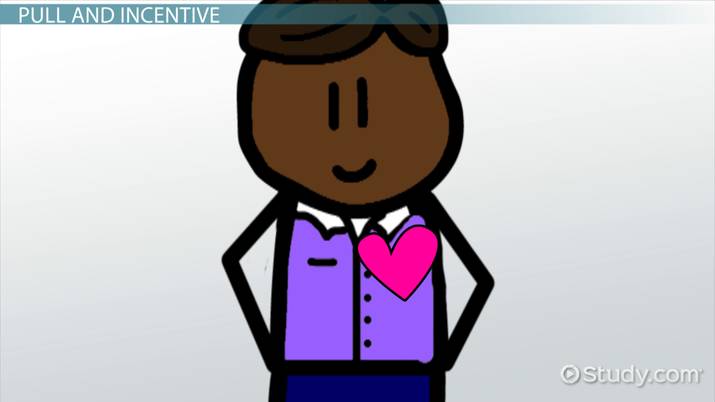 Consider the life of a toddler, and you can see just how closely the concept of pushing is related to a motivation to avoid an unwanted result. If you put broccoli on a toddler's plate, you may find it pushed off the plate quickly. If Great Aunt Scary Lady tries to get a kiss from the toddler, she is likely to find herself being physically pushed away as the toddler tries to escape the embrace.

Pushing away things we don't want is a natural behavior for humans (and animals alike). The push side of this motivational theory is defined by the term motivation. We are motivated to make a change away from a painful or undesired state. People can be highly motivated to make huge efforts in an effort to avoid or reduce painfully unwanted scenarios.

A student who has been told he is failing a required course and may not graduate will be highly motivated to begin to study hard for that course. He may spend hours every day studying. He may cancel outings with friends in order to study. The constant threat of failing looms over him. However, as soon as he has passed a test or two and is out of failing danger, he is likely to return to his previously lacking study habits. In other words, as soon as the motivational push is gone, his behaviors change.

We want incentives; they make our lives better. We move toward incentives of our own accord, not being forced (or pushed) towards them. The closer we get to an incentive, the more we want it and try to get it, as if it is pulling us to the end goal.

Things that are incentives pull us towards them because the desire for them comes from within ourselves. This is the main difference between push and pull motivation; push motivators are external forces, while pull incentives stem from internal forces.

It is impossible to create change in a person using an incentive they do not desire. Most parenting self-help books and classroom management tips will give the advice to ''find the child's currency'', meaning you must find that one thing that the child (or person) actually wants in order for it to act as an incentive for changed behavior. However, in most cases, behavior changed to reach an incentive (like hard training to win a special race) results in long-term change.

Not all scenarios are simply push or pull. In some cases, a person might be motivated to change a painful situation as well as incentivized toward an end-goal of their heart's desire. This is sometimes true of a person who changes their lifestyle due to a medical complication. A heart attack or other life-threatening occurrence may be the initial motivation (push away from a painful situation to be avoided), but as the person begins to look and feel better, the desire to continue and maintain the new feeling can act as an incentive (pull toward a desired situation).

Sometimes one person's motivator (push to avoid) is another person's incentive (pull to attain). You may have seen this in action if you have two or more children. One child may hate quiet time in his room, while the other may thrive on being given alone time. Imagine what would happen if you tried to use quiet time as a motivator for your children. The one that hates it would do anything to avoid it while the one that loves it would do anything to get it!

The push and pull theories of motivation state that the desire for certain results comes from different directional forces, either a push or a pull towards the end goal. Motivators are external forces that push us away from an undesired or painful result. Incentives are internal forces that pull us towards our desired goal. End goals can be both motivators and incentives. End goals can also be seen as solely a push for some and solely a pull for others.

Motivating Factors for Why People Travel

Elements of Thought | What is Thinking?

Sectors of the Tourism Industry

Non-Recoverable Damages: Damages Due to Breach of Contract

The Relationship Between Tourism & Geography