Audrey is a doctoral student in English at University of Maryland.

'Purple Hibiscus' is a coming-of-age narrative about a young Nigerian woman who struggles to assert her identity in a patriarchal culture. Read a plot summary and examine some of the themes of this debut novel by Chimamanda Ngozi Adichie.
Create an account

Purple Hibiscus was written by Chimamanda Ngozi Adichie in 2003. This post-colonial novel depicts the colonialist regime in Nigeria, a time and place of economic and political instability and the author's home country. The novel uses first-person narration, taking the perspective of a fifteen-year-old girl named Kambili Achike. This allows readers to witness the protagonist's internal transformation. When we are first introduced to the character, we realize the extent to which her psyche is influenced by her father's rigid philosophy. But as the story progresses, readers witness Kambili's sense of identity develop and grow. 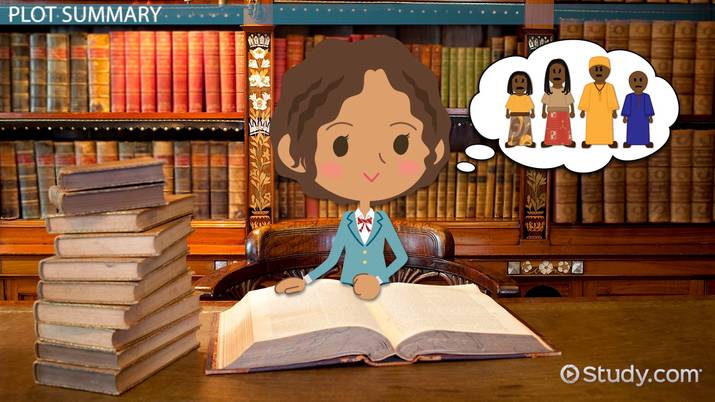 Coming up next: Thirteen Reasons Why: Book Summary & Characters

Kambili comes from an affluent, devout Catholic family. Her father, Eugene, is very strict, and he physically and emotionally abuses Kambili, her mother, and her siblings. Eugene has disowned his own father, who follows the traditional Nigerian religion and worships a deity named Chukwu. Eugene refuses to allow his children to see their 'heathen' and 'idol-worshipping' grandfather.

The narrative recounts the dissolution of Kambili's family as a result of her father's abuse. Kambili and her brother frequently visit their aunt, Ifeoma, and her three kids. When a military coup disrupts life in their hometown, they stay with her permanently.

At Ifeoma's home, Kambili and her brother experience familial love and warmth for the first time. Ifeoma teaches at a local university. She is also a Catholic, but her religious philosophy is much more relaxed than Eugene's. Ifeoma nurtures her children and their cousins. With her encouragement, Kambili and her brother, Jaja, begin to think independently and gain the courage to express their own opinions. Kambili meets with a young priest, Father Amadi, to whom she is very attracted. Father Amadi explains to Kambili that, while he cares deeply about her, he cannot enter into a relationship with her because he is devoted to the Church.

Back at home, Kambili's mother, Beatrice, poisons her husband because she is no longer able to tolerate his abuse. Jaja takes the blame for the crime, and he is sent to prison. During this time, Ifeoma and her children move to America. Kambili remains in Nigeria, where her brother serves a three-year prison sentence and her mother's health diminishes. The novel concludes shortly after Kambili turns eighteen. Though her fate is left unexplained, Adichie leaves the reader with a sense of hope for this character, who has learned to think and speak her mind.

Like many of the author's later novels, Purple Hibiscus explores the possibility of love and friendship amidst hardship and terror. Kambili is reared in a household of discord and violence, but she is still able to find goodness in herself and others.

Another important theme is religious hypocrisy. Kambili's father is a religious zealot, who devoutly attends daily mass. Yet, he has made his fortune by exploiting the less fortunate, and he subjects his wife and family to continual abuse. Only when a coup occurs does his life of privilege begin to erode.

Purple Hibiscus by Chimamanda Ngozi Adichie explores the themes of religious hypocrisy, finding one's voice, and the persistence of love through the story of Kambili Achike, a young Nigerian woman struggling to find her way in a world beset with conflict and strife. The purple hibiscus that blooms in her aunt's garden serves as a symbol of her personal growth.

Nigeria's Dictators & Their Impact on the Country