The Pyramids of Giza are the largest of the pyramids and consist of three pyramids in total along with the Sphinx statue. Explore the location, historical significance, and facts about the Pyramids of Giza as well as pyramids that were constructed before and after them. Updated: 10/15/2021
Create an account

The Pyramids of Giza are the largest and most recognizable pyramid structures in the world. They were built to honor certain Pharaohs of the fourth ruling dynasty of Egypt during a period known as the Old Kingdom. The Old Kingdom was the first great era of Egyptian civilization and lasted from 2686 to 2181 BCE. The pyramid complex at Giza consists of three main pyramids as well as the famous Sphinx statue. Today, Giza is located just outside of Cairo, Egypt. 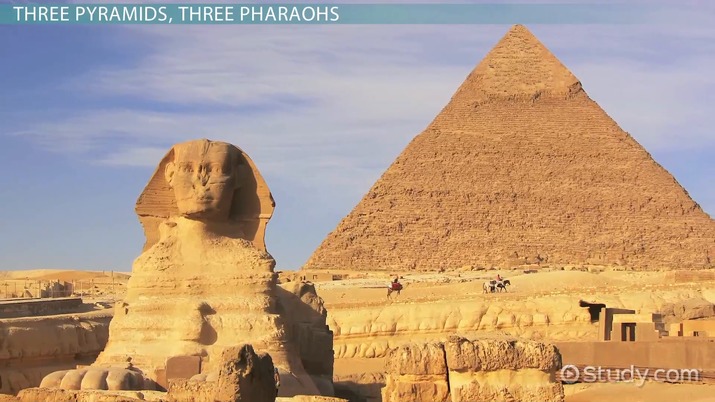 The pyramid of Khufu is the largest of the three pyramids at Giza and holds the record for the world's largest stone structure, standing over 480 feet high. It was built during the reign of the Pharaoh Khufu, the second Pharaoh of the fourth dynasty. The second largest pyramid at Giza is that of Khufu's son, Khafra. The famous Sphinx statue is believed to have also been constructed to honor and resemble the Pharaoh Khafra and stands beside his pyramid. The third and smallest of the main pyramids at Giza is that of another Pharaoh of the Fourth Dynasty, Menkaure. It stands at just over 200 feet high. Each of these pyramids form the center of their own complex of structures, which includes smaller tombs, chambers, work camps and cemeteries for lesser elites.

Pyramids were constructed throughout Ancient Egyptian history as a means for Pharaohs to display their power. Upon the death of a Pharaoh, his body was mummified and entombed, sometimes in a pyramid or in an adjacent tomb, along with valuable possessions and often times even mummified servants and pets for use in the afterlife. It was believed that a Pharaoh was a semi-divine being who ruled on Earth during life and then passed into an afterlife amongst the gods. Religion stood at the very center of Egyptian society, and the Pharaoh served as both a religious and secular leader.

Evidence of a Sophisticated Society

Large pyramids like those at Giza are evidence that ancient Egyptian society was well organized, prosperous, and very hierarchical. Such pyramids could not have been built without massive inputs of labor from tens of thousands of workers laboring for years on end. Similarly, such labor could not have been marshaled without strict oversight and a rigid social hierarchy.

The actual task of constructing the pyramids would have required extensive planning and organization. The giant stone blocks used to build them weighed several tons and were transported over great distances to the building site using riverboats and specially constructed ramps. Labor was likely seasonal, as many working on the pyramids had to tend to their crops during the spring and summer.

The pyramids are also evidence that ancient Egyptian society had some knowledge of mathematics. Construction would have required careful planning and calculations to ensure that everything went smoothly and that the structures were perfectly proportioned and aligned. The pyramids of Giza have a square base and four triangular sides. It is interesting to note that the sides of the pyramids' bases are almost perfectly aligned north to south and east to west.

Pyramids Before and After Giza

The pyramids at Giza were neither the first nor the last pyramids built in Egypt. Construction of pyramidal stone monuments is common throughout early human history, particularly in societies with large workforces, established social hierarchies and some form of divine kingship or elite priestly class.

The pyramids at Giza are the architectural descendants of earlier structures called mastabas. Mastabas were squat stone structures with a flat top and sloping sides used as tombs for deceased kings. Over time, tombs were built by stacking mastabas on top of one another, creating what can be called a step pyramid. The most famous of these step pyramid structures is that of Pharaoh Djoser of the third dynasty, which predates the pyramids at Giza by roughly 100 years. Further refinement eventually led to the construction of pyramids with uniformed sides like those at Giza.

The Pyramids of Giza were not the last to be built in Egypt, but they were by far the largest. Even though Egyptian civilization would continue on for several thousand more years, none of the pyramids or monuments constructed thereafter would match the great Pyramids of Giza for size.

The Pyramids of Giza are monumental tombs constructed by three different Pharaohs of the Old Kingdom from 2686 to 2181 BCE. Pyramids were symbols of a Pharaoh's power and affirmed their status as a divine ruler. They are also evidence that Egyptian society was prosperous and possessed vast resources of labor and a highly developed system of social organization. The task of building the pyramids involved transporting millions of stone blocks, each weighing several tons, over great distances. The Pyramids of Giza were not the first nor the last pyramids built in Egypt, but they are the largest that were ever built.

The Nile's Impact on the Development of Egyptian Civilization