Copyright
Lesson Transcript
Instructor: Lynee Carter
Pyrosis, also known as heartburn, is characterized by pain or discomfort in the chest or upper abdomen. Learn about the definition, causes, and symptoms of pyrosis, and explore the treatment options for this condition. Updated: 10/14/2021
Create an account

When you eat, food travels from the mouth through the esophagus and down into the stomach. The stomach contains acid that helps break down the food. Conveniently, the stomach has a protective lining that allows it to handle the acid that the esophagus does not possess.

At the bottom of the esophagus there is a sphincter. It acts like a door by opening to allow food in the stomach. It also closes to keep the stomach contents out of the esophagus. When the sphincter does not work properly, the contents of the stomach (including the acid) travel back into the esophagus, resulting in a burning sensation. This is called pyrosis, or more commonly, heartburn. 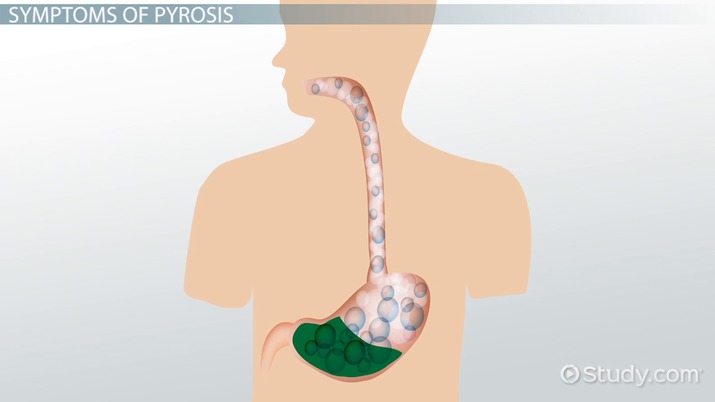 Try it now
Back
Coming up next: Sphincter of Oddi Dysfunction: Symptoms & Treatment

There are a number of causes of pyrosis, which plagues millions of people around the world. Some of these reasons include:

The pain of pyrosis is described as a burning sensation that begins in the chest behind the breastbone and spreads to the neck, throat, and jaw. It can also start in the abdomen and produce a feeling of gas, fullness, and gnawing discomfort that occurs after eating. Sometimes the pain is so severe that it is difficult to distinguish from the pain experienced when having a heart attack.

Regurgitation is when some of the stomach contents travels back through the esophagus into the mouth. It is similar to vomit but comes up in liquid form and leaves a bitter or sour taste in the mouth. This occurs more when someone is lying down, bending over, straining, and belching.

Dysphagia is difficulty swallowing and occurs in severe cases of pyrosis. People feel like food is stuck in their throat or experience a sore throat. This is the result of the stomach contents irritating or damaging the esophagus lining.

Respiratory Problems can develop when someone has had pyrosis for a long time. There may be increased coughing and shortness of breath. It may also cause hoarseness and lead to other respiratory diseases, such as asthma.

The treatment of pyrosis depends on its severity. In mild cases, relief can be obtain by sitting or standing up, eating smaller meals, losing body fat when overweight, and avoiding the foods that cause pyrosis. In more severe cases, medication may be needed. People can start to take over-the-counter drugs called antacids that neutralize stomach acid. If they do not work, medications that reduce the amount of acid the stomach produces, cause the stomach to empty food faster into the intestine, or prevent the stomach from secreting acid are all prescribed by a doctor.