Quantum physics or quantum mechanics is the study of the universe on a very small scale. Study the definition of quantum physics, key ideas and theories, and the topics associated with this branch of physics. Updated: 10/12/2021
Create an account

What Is Quantum Physics?

Did you know that there is a tiny probability that the next time you walk into a wall you'll go through it? Or that light is both a wave and a particle? Or that a cat can be both alive and dead at the same time?

No? Well, those are just a few of the weird and wonderful conclusions people have made from studying quantum mechanics. Quantum physics is strange. There's just no denying it. But what exactly is quantum physics?

Quantum physics, more commonly known as quantum mechanics, is a body of work in physics that seems to explain the universe on tiny scales. The laws of physics that work on human scales just don't apply when things are extremely tiny. 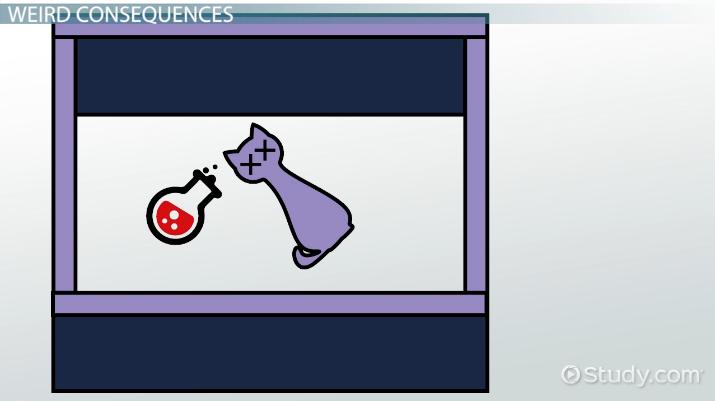 Try it now
Back
Coming up next: What is a Photon? - Definition, Energy & Wavelength

Quantum mechanics might be weird, but it explains a lot about the universe. It explains why light seems to act like a particle in some circumstances and like a wave in others. Or why particles like electrons can also act like waves. It explains the properties of the elements in the periodic table and how chemical bonding works.

In fact, if you have a flat-screen television, you probably don't realize that those were invented using quantum mechanical principles. Some parts of computers and sensors in digital cameras are also a result of quantum mechanics. As hard as it might be to get your head around, quantum mechanics works.

In quantum mechanics, a particle doesn't have an exact position but can be considered to be in multiple places at once. Instead of having things like position, mass, and velocity to describe a particle, you have a series of wave functions. A wave function is an equation that describes the probability of a quantity having a certain value. So, for example, it might tell you how likely it is that the particle is at point A vs. point B.

When we actually go and measure a particle's position, that wave function 'collapses' into a simpler one that represents the specific position we measured. Before we measured it, the particle was considered to be in every possible location at once. After we measure it, it now does have a specific position. But by measuring its position, we have affected it - we have forced it into having a specific position. The act of measurement affects the outcome. It's as if we've changed its nature from a wave, or wave function, to a particle. This is the source of wave-particle duality, the idea that things like light can act like waves in some circumstances or particles in others.

This leads directly into something called the Heisenberg Uncertainty Principle. This tells us that if you know one thing about a particle with a lot of precision, you can only know another quantity with hardly any precision. For example, if you know where your particle is within a small margin of error, you'll have no idea how fast it's moving.

The Heisenberg Uncertainty Principle explains a lot, and the mathematics behind it allows us to do things we could never do before, like build flat-screen televisions and tiny computers. But it does have some weird implications, both technical and philosophical.

A classic example is Schrodinger's Cat. If you were to apply quantum mechanical principles to a larger object, like a cat, it wouldn't really work. Let's say you put a cat in a box, with a glass vial containing a poison that would kill it. Inside the box, the cat might have knocked over the vial and be dead, or the cat might be fine. The only way to know is to open the box and see.

But based on quantum mechanics, until you open the box, the cat would be made of a wave function containing both outcomes. Essentially, the cat would be both alive and dead, at the same time. This scenario was designed by Schrodinger to show how quantum mechanics doesn't fit with the large-scale world, and we need some way of bridging the gap between the tiny and the large.

Ever wondered what it would be like to be a ghost? Since particles have probability distributions, and could be located anywhere, even if only with a small probability, it also follows that you could walk right through a wall! Your particles have a small probability of being on the other side of the wall, so it could happen. Unfortunately, it turns out that the probability of that happening is super low. You would have to wait an average of several times the age of the universe for it to occur.

Quantum physics, otherwise known as quantum mechanics, encompasses the physical laws that explain the behavior of the universe on the tiniest scales. On those scales, things work very differently. Something can be both a particle and a wave, called a wave-particle duality, and particles are described by probabilities - the position, velocity and mass of a particle is not certain or constant. When you measure the position of a particle accurately, you become less and less certain about its velocity, called the Heisenberg Uncertainty Principle.

When you apply these principles on a larger scale, they don't seem to make sense - a cat sealed in a box can be dead and alive simultaneously, and you have the ability to walk through walls. Philosophically, people have concerns that there is something we're missing that will bridge the gap between the tiny and the large.

Quantum mechanics might be weird, but it explains a lot about the universe and is good at making accurate predictions. We've used it to develop all kinds of technologies, including computers, flat-screen televisions and sensors in digital cameras.

Quantum physics: also known as quantum mechanics; a body of work in physics that seems to explain the universe on a tiny scale

Wave function: an equation that describes the probability of a quantity having a certain value

Heisenberg Uncertainty Principle: states that if one thing is known about a particle with a lot of precision, you can only know another quantity with hardly any precision

Schrodinger's Cat: an example that explains why quantum mechanical principles do not work when applied to a larger object, like a cat.

Subsequent to studying and reflecting on the lesson, try out your ability to:

Quantum Physics | What is Quantum Theory?

Quantum Physics | What is Quantum Theory?