Shannon teaches Microbiology and has a Master's and a PhD in Biomedical Science. She also researches cancer and neurodegenerative diseases.

Proteins have four levels of structure: primary, secondary, tertiary, and quaternary. The first three involve only one molecule. However, quaternary structure describes how proteins interact to form complex molecular structures.
Create an account

What is a Quaternary Protein Structure?

By definition, quaternary structure is the arrangement of more than one protein molecule in a multi-subunit complex. The nomenclature here can get a bit confusing because we call a single polypeptide chain a protein if it can function on its own. However, many proteins are actually comprised of several polypeptide chains. In this case, the individual peptide chains are called protein subunits, and they cannot function on their own. 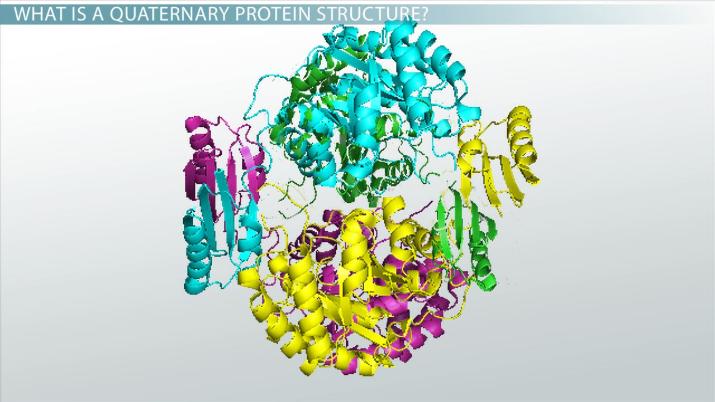 Coming up next: Secondary Structure of Protein: Definition & Overview

An example of a protein with quaternary structure is hemoglobin. In hemoglobin, one protein binds to oxygen while another binds carbon dioxide. This is how one protein can serve two functions.

As mentioned above, quaternary structure allows a protein to have multiple functions. It also allows for a protein to undergo complicated conformational changes. This has several mechanisms. First, an individual subunit can change shape. In addition, the subunits can change their orientation with regard to one another. A multimeric protein can do either one of these, or it can do both. These conformational changes allow for a high degree of regulation. They are also key to a multimeric protein's ability to perform its physiological function.

The majority of proteins in the Protein Data Bank (a library of 3-dimensional protein images submitted by biologists and biochemists) are homomultimeric. In fact, homomultimeric proteins are responsible for the diversity and specificity of many cellular pathways. They can also regulate gene expression, activity of enzymes, ion channels, receptors, and cell adhesion processes.