Susan has taught middle school English for five years and has a master's degree in teaching.

Queen Mab is a character named in a famous Shakespearean monologue by Mercutio in the tragedy ~'Romeo and Juliet.~' Read the full text of Queen Mab and explore an analysis of this speech, including how it foreshadows the events of the play and reflects on the nature of dreams. Updated: 08/28/2021
Create an account

O then, I see Queen Mab hath been with you.
She is the fairies' midwife, and she comes
In shape no bigger than an agate-stone
On the fore-finger of an alderman, (60)
Drawn with a team of little atomies
Athwart men's noses as they lie asleep;
Her wagon-spokes made of long spinners' legs,
The cover of the wings of grasshoppers,
The traces of the smallest spider's web,
The collars of the moonshine's watery beams,
Her whip of cricket's bone, the lash of film,
Her wagoner a small grey-coated gnat,
Not so big as a round little worm
Prick'd from the lazy finger of a maid; (70)
Her chariot is an empty hazel-nut
Made by the joiner squirrel or old grub,
Time out o' mind the fairies' coachmakers.
And in this state she gallops night by night
Through lovers' brains, and then they dream of love;
O'er courtiers' knees, that dream on court'sies straight,
O'er lawyers' fingers, who straight dream on fees,
O'er ladies o' lips, who straight on kisses dream,
Which oft the angry Mab with blisters plagues,
Because their breaths with sweetmeats tainted are: (80)
Sometime she gallops o'er a courtier's nose,
And then dreams he of smelling out a suit;
And sometime comes she with a tithe-pig's tail
Tickling a parson's nose as a' lies asleep,
Then dreams, he of another benefice:
Sometime she driveth o'er a soldier's neck,
And then dreams he of cutting foreign throats,
Of breaches, ambuscadoes, Spanish blades,
Of healths five-fathom deep; and then anon
Drums in his ear, at which he starts and wakes, (90)
And being thus frighted swears a prayer or two
And sleeps again. This is that very Mab
That plats the manes of horses in the night,
And bakes the elflocks in foul sluttish hairs,
Which once untangled, much misfortune bodes:
This is the hag, when maids lie on their backs,
That presses them and learns them first to bear,
Making them women of good carriage:
This is she-- 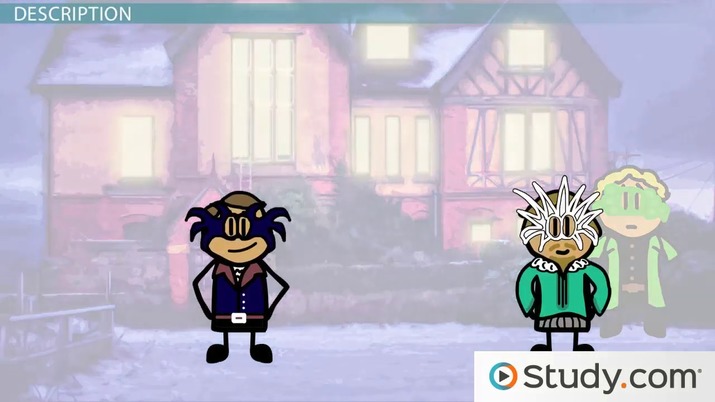 Coming up next: Friar Laurence in Romeo and Juliet: Soliloquy & Letter to Romeo

Mercutio's Queen Mab speech is not only one of the most famous speeches in Shakespeare's classic tragedy Romeo and Juliet, but it is also one of the more famous speeches in all of his collected works. Let's start with some background. Mercutio is Romeo's best friend but is very different from the romantic, dreamy heartthrob who falls in love with Juliet at first sight. Mercutio's name could be derived from Mercury and is similar to the word mercurial, which according to Merriam-Webster means characterized by rapid and unpredictable changeableness of mood. This is Mercutio to a T. He is volatile, moody, cynical, and has a sharp wit. His words are filled with puns, and his sharp tongue often stings, especially sweet Romeo. He mocks poor Romeo, and in turn, he mocks love. At times, he is the comic relief for a very tragic play.

Mercutio's monologue occurs fairly early in the play (Act I, Scene IV, lines 57-109), before Romeo even falls for Juliet. At this point in the play, Romeo is still pining after another girl, Rosaline. He is wounded from love and sulking quite a bit. As he and his friends prepare to crash the Capulets' party in disguise (where he eventually meets Juliet and falls in love), outside of the party on the street, Romeo and Mercutio begin a debate about dreams:

Romeo: I dreamt a dream tonight.
Mercutio: And so did I.
Romeo: Well, what was yours?
Mercutio: That dreamers often lie.
Romeo: In bed asleep while they do dream things true.
Mercutio: O, then I see Queen Mab hath been with you
(If you're following along in your copy of the play, these are lines 53-58.)

This moment is critical in the play because it serves as foreshadowing, or a warning about what is to come. Romeo shares with his friends that he had a prophetic dream the night before that warned him of going to this party (hence, the foreshadowing). This is where Mercutio starts spinning his tale about Queen Mab.

Romeo claims that dreams can be real or true because they reflect reality, while Mercutio argues that they lie. His speech goes on to claim that they reflect the individual's desires and passions. For example, when Queen Mab visits lovers, they dream of love, lawyers dream of money, and courtiers dream of curtsies. Therefore, from Mercutio's point of view, dreams do not imitate reality but the fantasies of human beings. He later claims that dreams 'are the children of an idle brain, begot of nothing but vain fantasy' (lines 103-104). Basically, he is trying to prove his point that dreams are nothing but the fantasies of fools, and they are made of nothing.

As Mercutio begins describing this fictitious fairy, he creates an image of something from a children's book. According to him, the mischievous little fairy queen visits dreamers at night and rides her chariot, 'an empty hazelnut,' right 'over men's noses as they lie asleep' (line 60). It is a whimsical and enchanted description. The fairy is no bigger than a gemstone and has a team of tiny creatures drawing her chariot. The spokes of the wagon wheels are made of spiders' legs, the canopy is made of grasshopper wings, and her whip a cricket's bone. Her driver is even a small gray-coated gnat. Adorable, right? Well, the speech slowly takes a darker turn.

According to Mercutio, this naughty little imp can become angry and plague ladies' lips with 'blisters' because their breath smells of sweet foods. In addition, she also drives 'o'er a soldier's neck and then dreams he of cutting foreign throats' (lines 86-87), of breaking through enemy lines, of ambushes and Spanish swords. Finally, 'this is the hag, when maids lie on their backs, that presses them and learns them first to bear, making them women of a good carriage' (lines 96-98). In other words, she teaches them to 'bear' children or, one could argue, teaches them how to have sex.

A sweet, imaginative fairy tale quickly turns to murder, war, and sex. This queen fairy becomes a bit of an evil nymph. So, what is Mercutio's point? Certainly, he becomes upset during the monologue because Romeo must interrupt him. 'Peace, peace, Mercutio, peace.' He pleads him to calm down. Why is he so upset?

Perhaps Mercutio can also see into the future. Perhaps his monologue is a bit of a warning. Maybe that is why Romeo interrupts his best friend. Maybe he cannot bear to face the truth about dreams, men's fantasies, and even love. Like Mercutio's fanciful fairy tale, the tale of 'Romeo and Juliet' also begins as an innocent love story - not to mention that Romeo and Juliet are practically children themselves.

But, like the Mab speech, the play also turns dark, and after several murders, feuds, and betrayal, we are left with the suicide of two young lovers. Mercutio's words remind the audience that love, like other desires, can be delusional and foolish, and like dreams, it can lie and eventually drag humanity down into the depths of despair.

This video on Queen Mab from Romeo & Juliet should help you to:

Puns in Romeo and Juliet Act 1

Alliteration in Romeo and Juliet